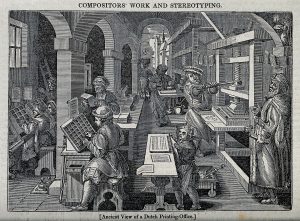 The printing press provided greater access to information for all and set the framework for the gradual transformation of societal literacy.

The advent of the printing press over five hundred years ago may be described as one of the few major significant events in mankind’s history in terms of the greatest impact on literacy. Before paper and print were invented, oral communication was the only method in which information was gathered and distributed. Even though this bound the community together, it did not allow the community to grow and there were no methods of accurately storing and retrieving information. Further, if the community moved on or perished so did their historical records and knowledge. Although the following technologies involved the written word in the form of papyrus scrolls and manuscript codex as examples, it was still quite time consuming and limited to the upper literate elite class of society. When the printing press was invented there was a shift from the laborious manuscript making to the codex print allowing many copies of written work to be quickly created, in turn providing greater access to information for all and providing the framework for the gradual transformation of societal literacy.

The concept of printing was first conceived and developed in China and Korea. Although the concept was conceived by the eastern nations, the first mechanized printing press was invented by a German metalworker named Johann Gutenberg in 1452. Gutenberg did not invent the printing press but rather conceived the idea of movable type which is actually an aggregation of three distinct technologies utilized by humans for many centuries before Gutenberg (Jones 2007). This can be described as a form of remediation of previous communication technologies. Bolter defines remediation when a, “newer medium takes place of an older one, borrowing and reorganizing the characteristics of writing in the older medium and reforming its cultural space.” (Bolter, 2001, p.23). Gutenberg combined the technologies of paper, viscous oil-based ink and the wine press to print books thereby allowing for the mass production and distribution of written work. As a result of the printing press, there was no longer the need for the laborious manuscript copying and production of the written word.

The printing press allowed for the democratizing of knowledge as a greater number of individuals were provided access to more information. Through the printing press, written work was more uniform in its viewing format. The mechanization of the printing press achieved more regular spacing and hyphenation of the print. (Bolter, 2001). Prior to the printing press, the written word was individually scribed with no standard format, with inconsistent writing, grammar and handwriting. The printing press led to more consistent spelling, grammar and punctuation. (McLuhan, 1962). Through this uniformity and reliability of the written work, readers were able to consistently interpret the writer’s thoughts and ideas. While the printing press did not have any significant immediate effects on societal literacy, over the next few decades as more information through the written word was accessible and disseminated, this technology advanced mass literacy as demonstrated through a drastic rise in adult literacy throughout Europe. Prior to the printing press, books were quite expensive as it was a laborious task to hand-scribe each book. As a result, only the wealthy upper elite class could afford such books and therefore the literate were mainly found at this class level. However, with the invention of the printing press creating nearly identical books of quality at an economical price, books were now more affordable and available to the general public. It is estimated that by 1500 there were “fifteen to twenty million copies of 30,000 to 35,000 separate publications.” (McLuhan, 1962, p.207)

The printing press has also been described as a driving factor in creating significant cultural and religious transformations throughout Europe. Eisenstein (1997) discusses the shift from manuscript to print in relation to three movements, namely the Scientific Revolution, Renaissance and the Reformation. With the invention of the printing press, the scientists were more readily able to share and exchange information. Further, as diagrams were hand drawn, detailed diagrams and sketches would be time consuming and the printing press would easily reproduce many copies with ease. By being able to quickly reproduce diagrams, pictures and tables for mass consumption and readership, scholars were more eager to take the time to produce accurate and useful illustrations. The dissemination of scientific knowledge through the use of the printing press further increased literacy as more individuals would have increased access to such knowledge and would be readily available for the next person to continue or build on previous research.

The printing press was an agent of change in terms of educational practice. It transformed the relationship between educator and student. “Previous relations between masters and disciples were altered. Students who took full advantage of technical texts which served as silent instructors…. Young minds provided with updated editions, especially of mathematical texts began to surpass not only their own elders but the wisdom of ancients as well.” (Eisenstein, 1979, p. 689).

Lastly, many works were produced in the Latin language and thereby the printing press assisted in promoting this language. However, very few individuals knew how to read Latin and so over time and with the demand by the ever increasing literate public, a growing number of written works were being translated from Latin and slowly replaced by the vernacular language of each area. From 1520, many printers turned their offices into workshops for translators. (Febre & Martin. 1997: 271-272). In providing written work in an individual’s native language, this further positively impacted literacy rates as there were less obstacles in access to the written word.

With the invention of the printing press, the most immediate effect was the output of a greater number of books at a more economical cost to the general public. Over the longer term however, books would not only increase literacy rates due to the increased availability and access but also would help begin the spread of political and religious movements within Europe. It is without a doubt the printing press has had an impact on societal literacy rates but to what extent is still debated. Currently we are experiencing a similar monumental shift in education in a new form of technology with the Internet. Hopefully we can learn from the implementation of the printing press and in conjunction with the Internet beneficially understand the growth, development and impact on literacy.

Jones, B. (2007). Manuscripts, Books, and Maps: The Printing Press and a Changing World. Retrieved from http://communication.ucsd.edu/bjones/Books/printech.html

Originally published by the ETEC540 blog at the University of British Columbia under the terms of a Creative Commons Attribution-ShareAlike 2.5 Canada license.