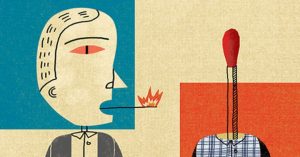 Are We Really so Different from Those We Criticise?

Many people have little trouble confessing to being hard on themselves, to being “my own worst critic” or to being a perfectionist. They are, after all, merely confessing to something that our culture upholds as a virtue: the struggle against the self. People are generally less likely to admit to being more harshly critical or judgmental of others than of oneself. That would be tantamount to outing oneself as a hypocrite.

Unfortunately for the image of the self-critic, it is impossible to be judgmental of oneself without being judgmental of others. Suppose each evening you look back over your day and evaluate whether you were truthful, ecologically responsible, wasteful, ethical, or greedy, praising yourself or beating yourself up accordingly. Well then, what about all those other people out there who were less honest, responsible, or ethical than you were? Are they therefore not as good as you are?

Whether you accord them patronizing indulgence or condemnation, the implicit belief that “I am better than you are” (or worse than you, but at least better than someone) is inescapable. 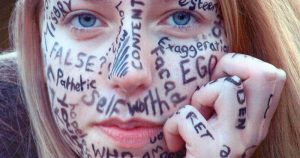 What do I mean by judgmentality? To be judgmental is not merely to draw distinctions, to have preferences, or to make comparisons. It carries a moral judgment, an assignment of right or wrong, good or evil, to a person. This assignment can take many forms. Words like should and shouldn’t, responsible and irresponsible, right and wrong, ethical, moral, justifiable, valid, shameful, or other synonyms for good and bad usually appear in articulations of judgment. 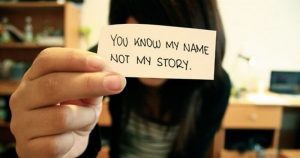 Judgment creates separation by assigning a moral distinction of right or wrong.

This is the essence of separation: If I were in the totality of your circumstances, I would do differently from you.

A substantial body of experimental evidence shows that this statement is false, that in fact if you were in the totality of his circumstances, you would do exactly as he does. As I shall explain, to align ourselves with this truth is perhaps the most powerful way to magnify our effectiveness as agents of change. It is the essence of compassion to put oneself in another’s shoes. It says, you and I are one; we are the same being looking out at the world through different eyes, occupying different nexus points in the universal web of relationship.

It is also very hard to accept. I might be able to see how I might resort to theft if my children were hungry or how I might senselessly vandalize public property if my childhood had filled me with rage, but what would it take for me to massacre seventy-seven people like Anders Breivik did, shooting them one-by-one as they kneeled before me weeping and begging for mercy? What would it take for me to take a chainsaw to a three-hundred-foot-tall redwood? I confess, it is very hard to put myself in the shoes of a torturer, an abuser of toddlers, a trafficker of sex slaves, a murderer. Yet let us not pretend that we are better than these people. Judgment toward them reflects only our lack of understanding, not any fundamental difference in our core being. 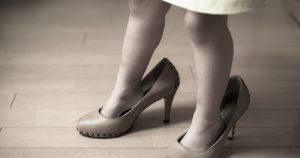 Walking in another person’s shoes fosters empathy, compassion and understanding.

I am articulating here a position known in social psychology as “situationism,” which says that it is the totality of our internalized and external situation that determines our choices and beliefs. In contrast, most people in our society hold the view of dispositionism, which says that people make decisions by the exercise of free will based on relatively stable dispositions or preferences. If someone does a good thing, says the dispositionist, it is probably because he is a good person.

The situationist says no, that is an error—the “fundamental attribution error.” A lot of careful research has shown that people (in our society) consistently attribute situational influences to dispositional qualities, and consistently underestimate the effect of conditions on people’s behavior. Someone says a mean thing and our first impulse is to think she is a mean person. We might later learn that she had a toothache and change our judgment, but the first impulse is to make a dispositional judgment.

That is no accident. Dispositionism and its attendant judgmentality is encoded into our Story of the World. In your shoes, I would not do as you did, because I am different from you, separate from you. Moreover, situationism says that the “I” is bigger than the individual, that the subject, the actor and chooser, is the individual plus the totality of his or her relationships. The self has no independent existence. Abstracted from its relationships to the world, the self is not itself. 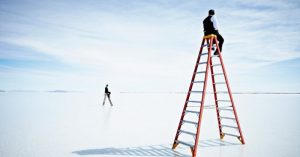 Don’t look down on anybody without taking into account the totality of their situation.

Would You Press the Button?

Decades of research, going back to the Milgram experiments of the 1960s, belie our sanctimonious belief that if I were that CEO, that politician, that brother-in-law, that ex-spouse, that teacher, that addict, that inexcusable person, then I wouldn’t have done what she did.

Ask yourself, what kind of person would deliver painful, even life-threatening, electrical shocks to an innocent subject as part of a psychological experiment? Surely only a very bad person would do that. Surely you wouldn’t do that! Well actually, as it turns out, “you” would. Or at least nearly everyone did in Stanley Milgram’s lab when the right conditions were present and the right excuses, the right story, was available. “Surely it can’t be wrong if a Yale scientist with a white coat is in charge.” “The subject did volunteer for this.” “I’m not the one responsible, I’m just following instructions.”

More broadly, the thought that anything monstrous could be happening in a laboratory, decked out with the regalia of science, at a prestigious university, was so dissonant with the prevailing Story of the World, with society’s consensus about legitimacy and propriety, that one volunteer after another turned the knob up to max and pressed the button. 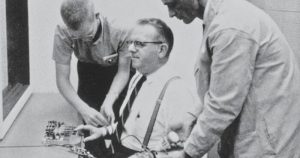 The Milgram experiment showed a willingness to follow orders from authority figures.

The question in the background was how to explain the fact that the Nazi Holocaust was carried out by bland bureaucrats like Adolf Eichmann and legions of quite ordinary people who had led commonplace lives before becoming SS officers and concentration camp guards. How to explain the “banality of evil”?

If we are to let go of the War on Evil, we must be able to reframe evil in a way that motivates some other kind of action. Because one cannot deny that some very horrible things are happening on Earth. These things must stop. I am not suggesting, here, that we close our eyes to what looks like evil. We need to open our eyes even wider to the situation—which is the story that immerses us—that generates evil to begin with. 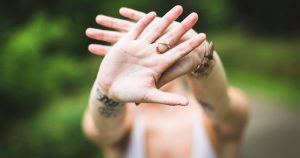 We cannot close our eyes against the evil that exists in the world and fail to take action.

The situationist perspective is, in one form or another, widely accepted in social psychology. A 1973 experiment by John Darley and C. Daniel Batson offers another example of the power of situation. You might know the Good Samaritan story from the Bible. A man has been beaten by robbers and lies moaning by the roadside. A priest passes him by. Then a Levite (who might be a priest’s assistant) does the same. Finally the Samaritan stops to help.

In telling this story, Jesus asks his questioner which one of these three proved to be a “neighbor” to the beaten man. He doesn’t say the Samaritan was good, but today the story is called the Good Samaritan, implying that what distinguished him from the priest and the Levite was his moral disposition.

In the experiment, a group of seminary students (modern-day priests and Levites in training—the experimenters were not without a sense of humor) were told they had to go across campus and deliver a lecture on the Good Samaritan story. They were divided into three groups and, one at a time, given instructions. Those in the first group were each told, “You’d better hurry up, you’re late for your interview.” The second group were told, “You’d better hurry up, your interview starts in a few minutes.” And the third group were told, “Well, you might as well head on over. Your interview doesn’t start for a while, but we’re done here.” 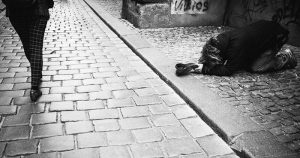 What would influence your decision whether to stop and help somebody in need?

On their way to the lecture venue, the students walked past a man (actually a confederate of the experimenters) sprawled in a doorway, groaning. The students practically had to step right over him to reach their destination. Did they stop to help? As you might expect, it depended on which group they were in. Only 10 percent of the first group did, but 60 percent of the third.

Why did those in the first group step right over the “injured” man while those in the third group stopped to help? Obviously, it wasn’t because all the good people happened to be in the third group. Maybe the Bible story should be called “The Samaritan who wasn’t in a hurry.” And maybe we cannot blame the people we like to blame. Maybe the problems of the world cannot be met by conquering evil.

Not only our personal judgments but many of our social institutions, the legal system in particular, are based on dispositionist assumptions. We assume that ordinarily, people are responsible for choosing their actions, and distinguish between an act committed under duress and an act voluntarily chosen. But duress is just an extreme example of a situational influence. Are we to be blamed for the sum total of the experiences that have made us who we are? 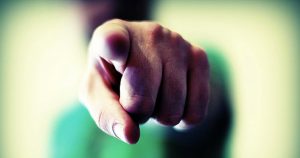 Should we be blamed for the sum total of the experiences that made us who we are?

Similarly, contract law assumes two parties entering an agreement of their own free will, based on an understanding of their own interests and preferences. A contract encodes a kind of force: it says, “I will allow you to force me to carry out what I have agreed to herein.”

In everyday interactions, we understand that sometimes “things change,” and don’t hold someone to a promise if their situation has changed a lot. We recognize that the person who made that promise cannot be separated from their life circumstances, and when these change, they change. The person who promised, in a sense, no longer exists. A contract is an attempt to deny this truth.

Clearly, situationism has immense implications for the nature of choice, free will, motivation, moral responsibility, and criminal justice. 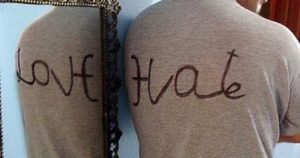 Circumstances change and we need to see the full story to refrain from judgment.

Situationism is also an understanding to which we have direct experiential access. Have you ever had a moment of understanding where another person is coming from, when all of a sudden we inhabit their world and everything they’ve been doing makes sense? No longer is that other person some kind of monster, an other. I can understand a little bit of the experience of being her.

With this insight, forgiveness arises naturally, and it is impossible to hate. It also shows us that whenever we do hate someone, we are hating ourselves too.