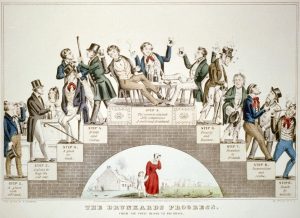 What caused the temperance movement in the United States? 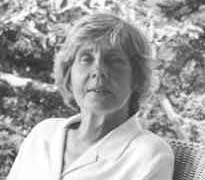 The causes of the temperance movement in the United States can be understood as emerging from religious, social, and economic circumstances. Distinct from 20th-century prohibitionists who supported total abstinence through public policy, supporters of the 19th-century temperance movement sought disciplined drinking, and found an early advocate in Dr. Benjamin Rush’s 1784 essay The Effects of Spirituous Liquors. In words intended to influence individual behavior, Rush argued that alcohol, when overused, was unhealthy. A few years later, this message was expanded into one of the reasons for the formation of an organization in Andover, MA, which intended to improve society through pledges of abstinence. By 1826, the American Temperance Society, a federation of over 8,000 temperance societies in towns and cities across the United States, claimed a million and a half members.

These enthusiasts were attracted to a message they heard from the pulpit: too much alcohol was a sin against God. The famous Congregational, later Presbyterian pastor Lyman Beecher was one of the most famous evangelical preachers who delivered this message when he urged all ministers to discuss the problem with their congregations, making clear that parents must stop drinking at home and employers must stop offering their employees grog. Imbued with the understanding that all Christians must strive for perfection, church members became willing participants in organized temperance societies. The Second Great Awakening, the crusade that began in the 1790s and continued into the early 19th century, further emphasized the responsibility of every believer for their own soul.

One of the other catalysts for the temperance movement was the increased availability of spirits for a generation of Americans whose water supplies were often contaminated. During the 1820s, the decade when the American Temperance Society was organized, the per capita levels of American drinking were at an all-time high. All forms of liquor, whether whiskey distilled from the surpluses of grain or the ubiquitous and powerful cider fermented from apples, were easily purchased in grocery stores or enjoyed in the all-male taverns that became the clubs of workmen.

For supporters of the temperance movement, public drunkenness became a distressing sign of how far the United States had strayed from its roots among those prudent hardworking founders. As the United States industrialized, employers sought sober disciplined workers who came to work on time. At the same time, women had special reasons to create their own temperance societies. Shunned in male associations, they confronted drunkenness in their homes. The great leader of the Women’s Christian Temperance Union, Frances Willard, had an alcoholic brother and she was only one of many women who found salvation in a movement that sought to control a problem with both public and private ramifications.