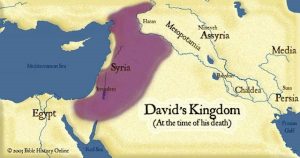 There is a lot of confusion about the variety of peace plans offered in the past for an Israel-Palestine peace. To start this journey of understanding we should begin with Israel under King David. That is the reference point of the radical religious Jews. As you can see in the map below, Israel consisted not only of the present day Israel but also large parts of Lebanon, Syria, Iraq and the Sinai part of Egypt.

For thousands of years it was home to a wide variety of residents from Muslim, Druze, Christians as well as Jews. For hundreds of years the land was under the administration of the Ottoman Empire without demarcations of individual countries. After WWI, the British controlled Egypt and Israel while the French were given control of Lebanon and Syria. The Zionist Jews of Europe were determined to reconstitute Israel and began massive movement to Israel. This upset the Arabs living in the territory and led to mutual violence between the two peoples.

This violence between the British, the Arabs and the Jews led to the establishment of Jewish paramilitary units – Haganah led by Ben Gurion, Irgun led by Begin and Lehi led by Shamir. By 1947 the British threw up their hands in disgust and said we’re leaving, the U.N should take over. That led to the U.N Partition plan, shown below: 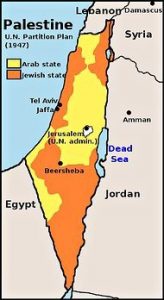 The orange area was supposed to be Jewish and the yellow area Palestinian with Jerusalem an Internationally administered city. No one was happy with this partition. Ben Gurion announced that he would accept the partition but also announced he would not rest until the Jewish state expanded to at a minimum to include Jerusalem. The Arab counties around this newly partitioned state announced who the heck is the U.N that can unilaterally take away our land and give it to the Jews and thus attempted with war to reverse the U.N. partition. By 1949 the war was over and the armistice line became the infamous “Green Line”. To the East of the line was a newly constituted Israel and to the West of line was considered Jordan whose army stopped fighting at the armistice line. 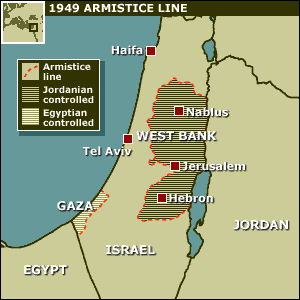 Ben Gurion’s dream had come true, Israel had regained much of Jerusalem but not the Western Wall. Until that happened Israel was not going to rest and in 1967 Syria, Jordan and Egypt were poised to attack but Israel struck first decimating Arab fighter jets and much of their tank force. Israel made quick work of the remaining Arab military capability in 6 days ending the War. In neither the 1948 nor the 1967 war were the resident Palestinians involved in the war. Both wars were between Israel and other countries’ armies and the Palestinians were, for the most part, caught in between. After the 1967 war Israel was in possession of a vast amount of territory, shown in the map below. 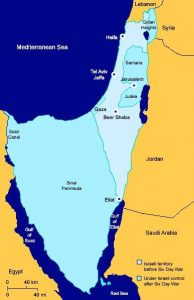 After the 1967 War thoughtful people in Israel started thinking seriously about what territory captured in 1967 should Israel retain. While Israel’s military was far more technologically superior to Arab forces, Israel had a small standing army relying on reservists for the majority of their fighting forces. Israel quickly realized that their ability to retain the vast Sinai Peninsula in the face of a concerted war effort by Egypt was very limited. The consensus was quickly reached that if Israel gave up the Sinai they would have the ability to keep the Golan Heights out of Syria’s hands as well as the West Bank where the Jewish historically important towns of Hebron, Shiloh etc were.

This was the lay of the land until Jimmy Carter led the effort to return the Sinai to Egypt in 1978. Is was an easier task the return of other captured lands from 1967 since Israel had known for years they could not defend the Sinai anyway. Once the Camp David Accords were signed in September of 1978, the world turned to the question of other captured lands from 1967. By 2000 the pressure on all parties was significant so Clinton led an effort in 2000 to at least settle the peace between Israel and the Palestinians. This led to Ehud Barak, Prime Minister of Israel at the time, to offer a peace agreement. This offer is shown below: 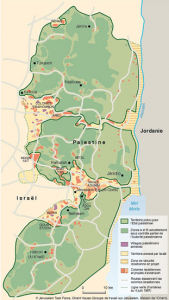 There were no maps produced at the Barak, Clinton Arafat peace negotiations so there is some differences of what the actual offer was but this is the best representation I believe. When people say that the Palestinians were offered 90+% of the West Bank and they turned it down, they are only partially correct. The yellow areas represent “temporary” Israeli security zones. The security zones represent 20-25% of the West Bank depending on whose perspective you believe. The Security zones were supposedly sovereign Palestinian land (that is how one gets to 90+% of the West Bank) but controlled by Israel for the next 25 years. After 25 years the Security Zone issue was supposed to be renegotiated.

Notice the Security Zones include many large Israeli settlements like Maale Adumim, Ariel, and the Gush Etzion settlement block. Some maps also depict a security zone going south to Hebron and the Kiryat Arba settlement. The effect of these Security Zones is to cut the West Bank into 3 Palestinian areas and gives Israel the right to control the entire border with Jordan. In 25 years there is no way Israel is going to reduce control and land of neither their large settlements nor the Jordan border so at best the Palestinians could gain enough land to make their 3 areas contiguous. In theory, the smaller settlements in the real Palestinian territory would either be dismantled or left to live in a Palestinian state. Last but not least, Israel would control the water resources (the largest west bank reservoir sits below Ariel) its airspace and Palestine would be demilitarized. Access to the Temple Mount (Noble Sanctuary) for Palestinians in Jerusalem was done with a convoluted land connection from Abu Dis that involved overpasses and tunnels.

The Clinton Parameters were accepted by both sides, with reservations. However, the points made were done with percentages of the West Bank land. It appears Clinton was trying to reduce the amount of land Israel held as Security Zones but without a map, it was impossible to know which settlements would remain and which would have to go. Also the two sides never agreed on how much land was in the West Bank. For example, Israel refused to consider the large Jerusalem municipal lines which included East Jerusalem as part of the West Bank since Israel had annexed it in 1980. In addition, the Clinton parameters negated any right of return of Palestinian refugees. Yet prior to these talks, Israel and the Palestinians had discussions about the return limited to 50,000 to 100,000 such refugees. The Clinton Parameters on this issue was a “slap in the face” to the Palestinians on an issue they considered very important. The Camp David negotiations broke up but further discussions were held at Taba which made progress but by that time, Barak was fighting for his political life in an Israeli election.

Peace talks were dormant for awhile and the Palestinians were growing more strident in their demands and violence. That led to Israel’s Prime Minister, Ehud Olmert and Abbas peace talks in 2008. After much discussion, Olmert showed a map to Abbas and then took it away. He demanded that Abbas sign the peace treaty based on a glance at a map. Abbas was not stupid enough to sign based on a quick look at a supposed Peace Map dividing Israel from Palestine and talks broke up. It was 2 years later that Olmert’s Map was leaked to the outside world and here it is: 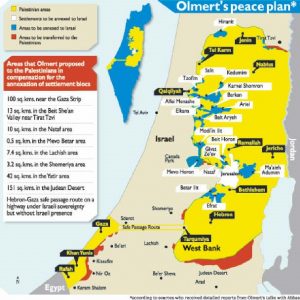 This is a substantial offer and if Olmert were serious about pursuing Peace he would not have pulled the trick of “now you see it, now you don’t”. This is close to what a final agreement would looks like however, according to a meeting I attended with Tzipi Livni (Olmert’s chief peace negotiator) this map does not reflect Israel troops would still control the border with Jordan. Nonetheless, this could have been a basis for final peace agreement.

I would be remiss in neglecting the 2005 withdrawal of troops and settlers from Gaza initiated by Sharon. Essentially, Israel got tired of the tremendous costs of defending 8,000 settlers on 1/3rd of the Gaza Strip from 1,800,000 Palestinians living on 2/3rds of Gaza. Leaving Gaza was a positive economic move as well as a positive political move for Israel. Nonetheless, Gaza with its’ Israeli blockade and Egypt’s cooperation on movement of people and goods into and out of Gaza, the best description of Gaza is it is the world’s largest outdoor prison. Unless Hamas changes it’s stripes, it is likely to remain so.

Finally we get to Netanyahu’s peace offers. Essentially, Bibi has told the Palestinians the Jordan Valley, Ariel, Maale Adumim, Hebron and the greater Jerusalem belong to Israel, now let’s talk. That is why there has been no progress because Netanyahu has taken important aspects of negotiation off the table.