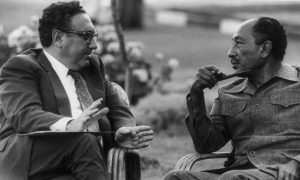 ‘You can never, in American public life, underestimate the advantages of complete and total incomprehensibility.’ Kissinger meets Anwar Sadat in 1976. / Wikimedia Commons

About 20 per cent of the United States population (60 million out of 300 million people) are non-native speakers of English. Speaking multiple languages has advantages – for example, you get to talk to people from different cultures. But being a non-native or second-language (L2) speaker also has its challenges. In addition to often feeling self-conscious about their accents, L2 speakers can be viewed by native speakers as less intelligent, and less trustworthy.

Thus it might come as a surprise that, in 1980, Henry Kissinger (the former US secretary of state and a non-native English speaker, originally from Germany) told Arianna Huffington (the Greek immigrant and entrepreneur/writer who would eventually start The Huffington Post) not to worry about [her] accent, ‘because you can never, in American public life, underestimate the advantages of complete and total incomprehensibility’.

Suppose you are at a cocktail party, and your conversation partner – someone with power in your field – wants to know your view about a potentially scandalous issue at your company. You don’t want to divulge what you know, but want the power player on your side. By speaking with a strong accent and using ungrammatical syntax, you can lead your listener to think that you are supporting a political view while discouraging them from pressing you for more information, because people generally avoid asking a lot of questions of someone whose utterances are difficult to understand. If there is confusion over what you had meant, you can later say you meant to convey something else!

To test the idea that L2 speakers get the benefit of the doubt, my team at the Massachusetts Institute of Technology had people listen to poorly formed English sentences such as:

(1) The millionaire profited the tax reduction.
(2) The earthquake shattered from the house.

These sentences were spoken either in standard American English, or with a strong Israeli or Hindi accent. Note that each of these sentences is oddly constructed: either the grammar is wrong, or the speaker is saying something strange. In the first example, maybe the speaker meant ‘The millionaire profited from the tax reduction’ or ‘The tax reduction profited the millionaire’. In the second, maybe the speaker meant ‘The earthquake shattered the house’ or ‘The house was shattered from the earthquake’. Otherwise, they are saying that a house somehow destroyed an earthquake, which makes no sense.

We interpreted this result in terms of a noisy-channel model of language processing. In many situations, we are not sure exactly what our conversation partner said because the communication channel is noisy: speakers misspeak, listeners mishear, and noise in the environment can distort the speech signal. So we have to make guesses about what the speakers probably said, given what we think they wanted to convey. Sometimes our guesses are amusingly wrong, as in the report from January 2011 about a flood in Queensland in north-eastern Australia. The Morning Bulletin newspaper quoted a piggery owner saying that ‘more than 30,000 pigs were floating down the Dawson River since last weekend’. What was actually said was ‘30 sows and pigs’ but the sequence ‘30 thousand’ is much more likely than ‘30 sows and’, because ‘thousand’ is a word that often follows a numeral such as ‘30’, and ‘sows’ is very infrequent in most people’s experience. The reporter was relying on his knowledge of language statistics to interpret something unusual that he’d heard. But if the reporter had also paid attention to likely meanings (not just sequences of words), then he would have asked more questions or requested photos of this river full of pigs.

Applying the noisy-channel idea to understanding L2 speakers, we can think of the errors in non-native English as a noisier language model than a native-speaker model. Listeners expect more errors and are therefore more likely to think that L2 speakers mean something sensible when they say something implausible. But if a native speaker says something nonsensical, listeners are more likely to take them literally, because they know their language model has less noise. Kissinger was advising Huffington that, given her accent, listeners would likely give her the benefit of the doubt.