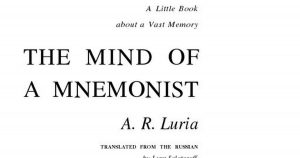 It all began with a daily meeting at a newspaper in Moscow, sometime in the 1920s.

The editor was handing out assignments to the various reporters and was annoyed to note that one of the newer reporters had neglected to bring along a notebook. Solomon Shereshevsky (sometimes spelled Sherashevsky), then 29 years old, was quietly listening to the editor speak while all of his fellow reporters were busy writing down their assignments. The editor had noticed this before and decided to give his employee a scolding for not paying proper attention. When meeting him afterwards, the editor was astonished to find that Shereshevsky was able to remember every detail of the meeting with perfect accuracy. The journalist was just as astonished at his editor’s reaction since he thought his perfect memory was normal. Always on the lookout for an interesting story, the editor decided to send his reporter to the local university for testing. It was there that Solomon Shereshevsky met neuropsychologist Alexander Romanovitch Luria and an amazing collaboration began.

Over the course of the next 30 years, Luria would carry out an extensive series of experiments examining the journalist who would become his most famous case. Solomon Veniaminovitch Shereshevsky (identified only as “S” in Luria’s writings) was born in Latvia and was part of an accomplished family (his father was a bookstore owner who could recall the location of every book in the store while his mother knew much of the Torah by heart). Although he had originally trained as a violinist, Shereshevsky became a journalist after an ear infection ended his musical career. Given his perfect recall, conventional memory testing was impossible but Luria was able to detail the processes underlying how Shereshevsky was able to memorize details so accurately.  During the research trials, Shereshevsky was able to recall extensive lists of words, numbers and even nonsense syllables without mistakes and with only occasional hesitation. He could also report the numbers or letters in reverse order and could retain the information, seemingly indefinitely. Even events from early childhood could be recalled (including things that happened when he was still in his crib). There also appeared to be no limit to his digit span (as opposed to the seven to nine items that most humans can manage).

Based on his research, Luria concluded that Shereshevsky possessed an extreme form of synaesthesia which he used to convert various stimuli into visual images. It was this visual imagery that was one of the key factors in his astonishing recall. Whatever he was asked to remember, he would first mentally convert into visual images but often needed extra time to make the conversion. The perfect recall only failed when this process was disrupted in any way. He was even able to convert music and numbers into visual imagery by imagining the tones or numbers visually.

There were some intriguing limits to what Shereshevsky could remember however. He had a surprisingly poor memory for faces or voices heard over a telephone. He also had difficulty with abstract logical concepts and metaphors and often appeared slow and forgetful to others meeting him. His synaesthesia made him acutely sensitive to changes in his environment (for him to enjoy food in a restaurant, there had to be the right kind of background music playing).

Alexander Luria published his research results in 1968 as The Mind of a Mnemonist: A Little Book about a Vast Memory which has since become one of the great classics of psychology. He died in 1977 after an accomplished career as a neuropsychologist.

As for Solomon Shereshevshy? His amazing memory was also a serious handicap since his visual imaging meant that he frequently spent his life in a nonstop daydream. He gave up his journalism career and became a professional mnemonist giving regular shows to paying audiences. Despite his success, he never had great satisfaction as a performer and gave it up after a while. The last reference that I could find on him was that he became a taxi driver in Moscow but his life faded into obscurity afterward. Aside from a possible death date in 1958, there seems to be little else available.

By his own reckoning, Shereshevsky viewed himself as a failure in life since he was unable to use his vast memory in a way that he found personally fulfilling. He had wanted to be remembered for accomplishing something “great” in his life and, given his place in the history of psychology, may have succeeded. In 1998, Peter Brook released a theatre production based on Shereshevsky titled Je Suis Un Phenomene (I am a Phenomenon).   Solomon Shereshevsky will be remembered.