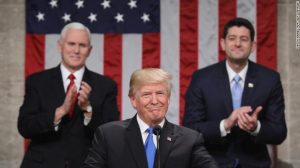 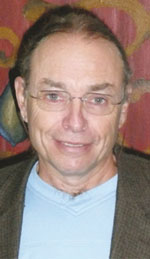 In his little munchkin voice—surprising coming from such a big fat man—and his chemically hardened helmet hair, Donald Trump gave us his version of the State of the Union.

It was, to borrow some of his superlatives, incredibly, amazingly, totally annoying.

Great, beautiful. Wonderful. Everything is great.

I am reaching back, searching my memory for another speech so rife with shallow, meaningless platitudes.

Trump’s newfound gift is combining lying with gushing and faux compassion. Coal accounts for some 83 percent of US air pollutants, is a serious factor in exacerbating our climate chaos—hurricanes, floods, fires—and yet its share of energy production continues to fall. Yes, stripping the law of environmental protections can give coal a bit longer to survive, but natural gas, solar, and wind farms are increasing despite Trump and the market forces will ultimately prevail over coal. Trump has made the coal industry the new corporate welfare queen, with all the costs passed on to the consumers and taxpayers. Beautiful.

Waxing on about how much he loves the flag, the national anthem, and those, unlike him, who served in the military, one can try to hold down one’s dinner. It’s not easy.

The stock market fell 400 points in anticipation of Trump’s talk.

He called on Congress to remove all government employees who fail to work for the good of the American people. Buh-bye, Trump!

“Exciting progress is happening every day.”

The elasticity of the truth was the leitmotif, as he claimed credit for far more than he actually achieved.

More whoppers included his claims of the biggest tax cut in history—not even close—the decline in African American unemployment—most of which happened before he took office—that vehicle manufacturing is coming back, which we “haven’t seen for decades”—actually George W. Bush and Obama were in office when several plants returned—and the list goes on. The only fact-checkers who agree with Trump seem to be the ones who don’t actually check.

Trump could not even resist lying about the numbers who tuned into watch the SOTU, tweeting that it was “the highest number in history.” Nope, his numbers were eclipsed by Obama, Dubya, and most resoundingly by Clinton in 1993. Not even close.

While the citizen stories his aides found for him were the highlights—especially the inspiring story of North Korean refugee Ji Seong-ho, one wonders, then, how Trump can continue to hypocritically deny refugees from bloody war zones, children and women and old people who manage to flee with their lives and little else.

We deserve better leadership, but we won’t get it until we the people make it happen.

Originally published by NationOfChange, free to the public.