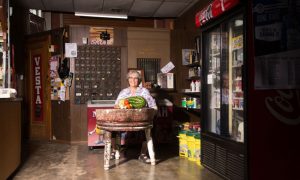 Debbie Bearden, coordinator at the Allen County Farm Bureau Association, sits in southeast Kansas’ Mildred Store behind the deli’s original butcher block. The store, which was a well-loved fixture famous for its sandwiches, had closed when the original owner passed away. The Allen County GROW Food and Farm Council helped the new owners reopen in 2014. Now, the owners host free live music events once a month at the shop, which is filled with the rural region’s history. / Photo by Jay Caldwell

After four years without an independent grocery store, the residents of Iola, Kansas, found a way to bring one back.

For two months in 2012, longtime Iola, Kansas, resident Mary Ross trudged through the sweltering heat, waving gnats from her view as she walked door to door with a petition. It was the hottest summer since moving there with her family about 30 years ago, but Ross was determined to gather signatures requesting a grocery store be established in the small rural town of fewer than 6,000 people.

Iola had lost its last independent grocery store four years earlier, shortly after the Wal-mart Supercenter—with its own expansive aisles—came to town and drove out all of the competition.

“I live in a small town. That was my choice,” she says. But since Iola’s three smaller grocery stores went out of business, she has to drive 8 to 20 miles to find healthy food choices and the specific ingredients for her home-cooked meals. “It’s like they’re trying to kill this small town,” she lamented. But the 800 signatures she gathered worked.

In October, Iola’s first grocery store in nearly a decade broke ground, thanks to a unique public-private partnership. Allen County agreed to sell property for it at a steep discount to G&W Foods Inc., a Missouri-based chain with stores scattered throughout the region.

“Basically, our community said that having a supermarket on this site is a priority, and we’re willing to put some skin in the game,” says David Toland, executive director of Thrive Allen County, a health and wellness center.

But the problem is bigger than Iola.

The absence of grocery stores in rural towns is a familiar tale throughout Kansas and the rest of the Midwest. In Kansas, nearly one-fifth of rural grocery stores went out of business over the span of four years, according to a 2010 study by the Center for Rural Affairs. Throughout rural America, 2.3 million people live in food deserts—areas 10 miles or more from a supermarket.

And when those rural towns lose their supermarkets, just as in Iola, workers lose their jobs and their health is negatively impacted. The Robert Wood Johnson Foundation ranked Allen County one of the unhealthiest in the state for a range of health concerns, including its high obesity and physical inactivity rates.

In response to the dwindling number of rural supermarkets, Kansas State University Center for Engagement and Community Development (CECD) partnered with storeowners and local organizations to create the Rural Grocery Initiative (RGI). Through this initiative, CECD aims to attract more customers to rural Kansas supermarkets by encouraging owners to sell additional goods like hardware, and offering support to communities with stores that have already closed. When the RGI was formed in 2007, there were 212 grocery stores in rural towns throughout the state that served populations of fewer than 2,500. Since that time, 33 of those stores closed and have not reopened, says David Procter, director of CECD.

To avoid further closures, the initiative is partly designed to inform communities of the importance of supporting local grocery stores, as well as show the financial and social consequences of their loss. The initiative’s community dialogue platform called FEAST (Food, Education, Agriculture and Solutions Together) involves a town hall-style meeting to talk about the local food system and the significance of the grocery stores.

It’s necessary to remind rural dwellers about the importance of grocery stores, says Procter, because there has not been as much research on rural food deserts as there has been on urban areas.

“[Kansas] is growing billions of bushels of wheat, which has turned into bread for everybody in the United States. It becomes tough for that to happen if there’s no community to support the ranchers and farmers that live in the rural parts of the state,” Procter argues. “If there’s no place for these folks to go to get food or to get hardware or to get pharmacy stuff, then it’s a domino effect, and at some point it’s going to impact the food that people in the cities are buying as well.”

Within the past few months, the RGI has received calls from food policy councils and wellness groups from two communities in Kansas that are struggling to maintain their supermarkets. Procter’s team plans to visit those towns to hold community dialogues, and work closely with leaders there to develop strategies that increase healthy food access.

In addition, there’s a rural grocery toolkit component to the initiative that addresses many of the challenges storeowners face. Within the toolkit, located on the RGI website, are several examples of how to do a marketing analysis, as well as a list of the legal requirements and licensing that new grocery stores will need. Financing opportunities and marketing plans are also available through open source, meaning that they’re freely accessible to the public. Also shown on the website, these open source models and case studies can be replicated in rural communities throughout the country.

Procter says many Kansas communities are looking at the RGI suggestions of community-owned, nonprofit, and school-based models (in which grocery stores operate through the local school system) as they learn how to navigate the next steps of dealing with the supermarket closings. Many stores that have become nonprofits have extended their missions to improve the overall health and wellness of their communities, he notes.

Among some of the innovative solutions to food deserts in Kansas, the Allen County GROW (Growing Rural Opportunities Works) Food and Farm Council is one that, in August 2014, was created as a resolution passed by the Allen County Commissioners. It was the first rural food and farm council in the state, and has spearheaded the launch of several others. Debbie Bearden, coordinator at the Allen County Farm Bureau Association, helped develop the council, and speaks at regional events about the importance of rural food committees. She encourages county leaders to think more broadly about how to achieve health and wellness.

“Getting a grocery store is a project and once it’s obtained, then we’re done. But if we were to create a food policy council, that’s a much broader umbrella,” Bearden says.

Over the past few years, the council has worked tirelessly to improve the county’s health ranking. It has pushed for the farmers market to operate an extra day and to also offer food demonstrations using fresh, local produce. The council is now working with five restaurants in Allen County to include nutritional labels on their menus. To further promote healthy eating, one council member, who is also a caterer, operates a food truck that sells salads and wraps in front of business complexes during lunch breaks.

“The towns that are going to survive are the ones that are creative with solutions, and building partnerships between supermarkets, local producers, and local governments to fix these food access problems,” says Toland, of Thrive.

Through Thrive’s work and the community’s efforts, Allen County plans to open the G&W Foods in Iola next spring. For Mary Ross, the opening of the market, only a half-mile from her home, signifies that the town is not dying. In fact, it’s a rebirth of sorts.

Now, not only will she have access to healthy food selections for her family, but she’ll also be able to find the ingredients she needs to experiment with different meals again. Ross says it was necessary that the community come together as they did to bring a new grocery store to town.

“If we don’t help each other, we will become an island unto ourselves,” says Ross. “Everybody is supposed to help everyone else.”