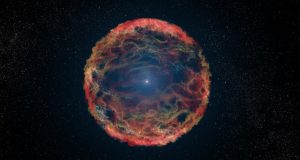 GHOST IN THE SHELL – What looked like an ordinary supernova, shown in this artist’s illustration, might be the result of a single star exploding at least three times, blowing off expanding shells of gas each time.

The weirdest supernova ever has lasted more than three years, and may be the third outburst from the same star.

A shocking supernova refuses to die.

This exploding star, named iPTF14hls, has erupted continuously for the last three years, and it may have had two other outbursts in the past, astronomers report in the Nov. 9 Nature. Such a tireless supernova could be the first example of a proposed explosion that involves burning antimatter in a stellar core — or it could be something new altogether.

“A supernova is supposed to be a one-time thing — the star explodes, it’s dead, it’s done, it can’t explode again,” says astrophysicist Iair Arcavi of the University of California, Santa Barbara.  “It’s the weirdest supernova we’ve ever seen … It’s like the star that keeps on dying.”

When iPTF14hls was discovered in September 2014 by the Intermediate Palomar Transient Factory, which scans the sky regularly with a telescope at the Palomar Observatory near San Diego, it looked like an ordinary type 2 supernova in a galaxy about 500 million light-years away. These explosions mark the death throes of a star between eight and about 50 times the mass of the sun (SN: 2/18/17, p. 24), and typically glow for about 100 days before starting to dim.

The first sign that iPTF14hls was unusual came a few weeks after its discovery, when it started growing brighter. That turned out to be one of five irregular cycles of brightening and dimming.

The star iPTF14hls continued its eruption for more than 600 days, and fluctuated in brightness at least five times (yellow). Typical supernovas (blue) fade after about 100 days. 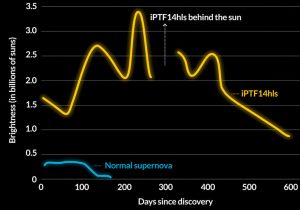 Even stranger, data collected from September 2014 to June 2016 show that the supernova remained bright for more than 600 days, Arcavi and colleagues report. The eruption, which is just showing signs of winding down now, may have already been in progress when it was discovered, so it could have persisted even longer.

“That’s just unheard of,” says theoretical physicist Stanford Woosley of the University of California, Santa Cruz, who was not involved in the discovery. “Ordinary supernovae don’t do that.”

Normally, layers of gas kicked out of an exploding star slow and cool as they expand. But iPTF14hls maintained a toasty temperature — about 5,700° Celsius — for the entire time it was observed, and its outer gas layers did not slow down as they should have. That means that this gas may have already cooled and slowed, suggesting it had been expelled in an earlier, superpowerful eruption that occurred unseen between 2010 and 2014, the team suggests.

Historical data on photographic plates from the Palomar Observatory showed yet another bright burst in the same part of the sky in 1954. One theory suggests that stars between 95 and 130 times the mass of the sun can explode several times, although these cyclic deaths have never been seen before. Such stars get so hot that they convert gamma rays, whose high energy helped keep the star from collapsing under its own gravity, into electrons and their antimatter counterparts, positrons. Without that internal energy, the star’s core collapses and gets even hotter. That collapse can trigger a partial explosion, in which the star blows off a large amount of mass. But after the explosion, the electrons and positrons can recombine into gamma rays and hold up the remaining stellar core.

Historical data from the Palomar Observatory showed a bright burst in 1954 at the same point in the sky as iPTF14hls (left). In 1993, the explosion had faded (right).

The star can blow off steam several times, the idea goes, before finally dying in a supernova. Eventually, the remains of such a supernova would collapse into a black hole with about 40 times the mass of the sun.

But this theory also predicts that the star would blow off all its hydrogen in the first explosion. That doesn’t fit here: iPTF14hls expelled 50 times the mass of the sun in hydrogen in 2014. The amount of energy in the most recent explosion is also greater than it should be.

Woosley thinks that a magnetar (SN Online: 11/3/10), a highly magnetized rapidly rotating stellar corpse, could glow continuously for around two years, although that wouldn’t explain the 1954 eruption. He hopes the most recent data will help determine which theory is right, or if physicists need to come up with something new.

The show may be ending. The latest data shows that iPTF14hls is finally fading, Arcavi says. As the outer layers of gas cool and become transparent, they could reveal whatever is at the explosion’s core. The team plans to just keep watching.

“I am not making any more predictions about this thing,” Arcavi says. “It surprised us every time.”