How to bring a native housing form back from extinction

In her best-selling book Biomimicry, Janine M. Benyus describes the human quest to learn from nature. We want to employ the qualities of spider silk, gecko feet and sharkskin in new materials or the structural efficiency of paper wasp nests and honeycombs in our designs. But it was the chapter about natural systems that got me thinking about community stability.

Benyus compares local economies to an ecosystem, where species evolve to fill niches vital to the sustainability of a grassland, forest or tide pool. Relationships evolve over time to create health and stability. As long as there is balance, the system endures.

And a mix of housing types and price points is essential to a community’s ecosystem.

Pick up any record of human civilization and you’ll read about a basic ‘species’ of housing: the boarding house or inn. This let folks new to town or short on cash establish a temporary base from which they could hold down a job, receive mail and have a measure of privacy. Some were artists, writers or musicians, while others joined the local labor force. Whatever the name — residential hotel, rooming house or YMCA — these simple, affordable spaces filled an important niche.

Boise’s own culture and history were shaped by people who lived in the many Basque boarding house scattered through the community.

Affordability is relative. The National Housing Act of 1937 defined housing costs below 30 percent of a household budget as ‘affordable,’ regardless of income. When rent or mortgage costs exceed 30 percent, households are cost burdened. The ripple effects of this financial stress can impact job and school attendance, undermine physical and mental health, and often involve costs to taxpayers and society.

Housing as a Second Language, photo composition. Creatures in their own tiny houses. / Erik Kingston

Housing is made affordable by increasing household incomes or lowering the HUT index, where Housing + Utilities + Transportation = the net cost of housing type and location. Creating sustainable housing infrastructure means focusing on location, quality and performance to reduce lifecycle and household costs for future users. Utility costs in many Idaho markets routinely equal or exceed rent, and as housing costs have outpaced wages, we’ve developed a ‘drive until you qualify’ mentality that trades longer commute times for lower rents.

BUT HOW DID WE GET HERE?

Federal housing finance and community development policies started with good intentions; the idea was to raise the standard of living for urban dwellers through ‘bigger, better’ housing and urban renewal. This meant the feds — and subsequently private lenders — stopped financing small-footprint housing or housing as part of downtown mixed-use development. Combined with the rise of an auto-centered culture, these led to suburban sprawl; as people left the cities, urban decay took hold.

These policies also yielded what Paul Groth — author of Living Downtown: The History of Residential Hotels in the United States — describes as “…first, the seemingly irrational destruction of millions of private low-rent housing units that are still desperately needed, and second, the near total misunderstanding of life in such places.”

Now that the boarding house has become an endangered species, those at the lowest income levels are forced to double up with others or live in substandard housing. They share dilapidated trailers in badly managed ‘parks’ or find run-down rentals in locations that people with higher incomes wouldn’t go near. Otherwise, they’re homeless.

While the resulting building codes and federal housing policies set a high — and costly — bar for those trying to build new subsidized housing units, existing low-cost housing is often plagued by code violations like mold, inoperable plumbing and heating systems and other life-safety hazards. Tenants can complain and risk eviction or retaliation, or they can endure and try to find something better. No complaints, no code enforcement.

The supreme irony is that many poor people continue to live in overcrowded and unsafe conditions that housing and finance policies sought to correct in the first place.

Boise’s construction boom includes new downtown residential developments, with rents ranging from $900 for a studio to $1,300 for a two-bedroom unit. If you can find one, older rentals start at $650. An individual working full time at Idaho’s minimum hourly wage of $7.25 can afford no more than $377 in rent. It’s basic math, not rocket science.

These current and planned units are simply out of reach for the estimated 5,000 to 6,000 cost-burdened households in Ada County; what I call ‘homeless in waiting.’ Limited incomes mean they lack the commercial value needed to support new development, so nothing is built within their means… they are only viewed as a target market by payday and title lenders.

When their house of cards finally collapses, these individuals, couples and families might join the ranks of homeless in local shelters, with some exceptions and unfortunate consequences. While families with children can be housed in the family shelter or apply to receive help from CATCH, childless straight couples can’t stay together. And if you’re someone trying to hold down a job — particularly a swing shift — shelter hours and crowded dorms make it difficult to get enough sleep to maintain health and productivity.

There is no single answer to homelessness, because there are so many ways to become homeless. We need all hands on deck, and a range of public and private options.

SO HOW DO WE FIX THIS?

Everywhere you look, there are stories of the demand for ‘small-footprint’ or tiny houses (wheeled or stationary), co-housing models and even high-density micro-apartment complexes in some cities. Nature abhors a vacuum, and maybe these trends are signaling a grassroots correction of the loss of diversity.

As we look to re-imagine and energize the Central Addition neighborhood and other downtown districts, perhaps developers could set aside a floor here or there of ‘residential hotel’ units to house minimum-wage workers and students. This would not only create needed diversity, it would move our community toward fair housing compliance and provide a perpetual asset. Since low-cost housing represents a wage subsidy for local employers, they might be invited to purchase capacity in certain developments to share costs and support staff recruitment, reliability and retention.

But most planning and building ordinances still reflect the thinking that eliminated lower-cost options and led to gentrification in the first place. The trick is to preserve safety and aesthetics, while supporting efforts to keep costs of construction in check and still cover the costs of service delivery and infrastructure. Idaho planners and policy makers are grappling with these issues, and they want to get it right.

It will require effort on the part of policymakers, housing developers and even private citizens to cultivate heirloom housing types like the boarding house, although the new versions will feature shared wifi, espresso machines and bike-friendly, super-efficient green building amenities. Think of it as co-housing for the working poor and the creative class that make cities more stable and interesting.

Reinterpretations of the boarding-house model can be seen in places like Opportunity Village Eugene (a project of SquareOne Villages), which builds simple and attractive ‘detached bedrooms’ around a central shared space containing bath house and bathrooms, kitchen, meeting space and laundry. The basic arrangement offers privacy and security, and helps residents hold down a job and contribute to the community. 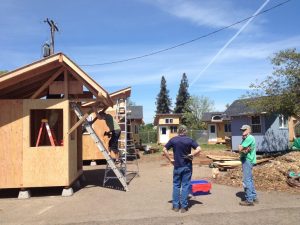 The model works for a couple of reasons: 1. the City of Eugene provides surplus land and features flexible building and zoning options that allow for detached bedrooms — minus plumbing or electrical; and 2. an established faith- and community-based nonprofit uses private funds and volunteer labor to create and maintain the operation.

Here in Boise, several private groups are responding in various ways. While the city and its partners look to establish Housing First or Permanent Supportive Housing models for those experiencing chronic homelessness tied to mental illness or addiction, the working poor still require options. We should also be creating opportunities for those who can hold down a job and live independently, but who face barriers involving credit or income.

The Boise Alternative Shelter Cooperative hosted Andrew Heben of SquareOne Villages last fall to outline their village model. Despite enthusiastic support from community members, we know it presents challenges given current local zoning and building limitations. The city is reviewing alternate new housing types, but for the time being it’s a heavy lift to create a formula that satisfies every stakeholder.

A more straightforward option may involve large-footprint, community supported rental homes with common space, private rooms, and extremely low rents. These would resemble any other rental shared by students or other housemates. We see an opportunity to set aside a portion of rent each month as a security deposit on installments, which then doubles as an escrow account to help with move-in costs once the tenant is ready to move on. Ideally, this would also establish rental history and references.

What sets this concept apart from a standard private rental is that it aims to make a difference, not a profit. It’s about bringing much-needed — and lasting — diversity to local housing types and price points.

Next time you’re visiting a local retail business or coffee shop, take a moment to ask about (or at least consider) where the workers live. And then think about the forced subsidy they provide to employers and customers by commuting long distances or compromising health and safety in order to provide service… at a price you consider affordable.

Then consider how you or your organization might help restore some balance to our ecosystem.