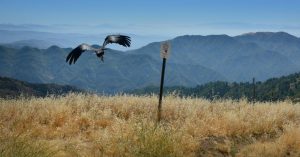 The Trump administration’s rollback of endangered species protections could bring animals including the California condor closer to extinction, after years of efforts by environmental advocates to increase their populations. (Photo: Pacific Southwest Region USFWS/Flickr/cc)

If Interior Department’s proposals are approved, “Zinke will go down in history as the extinction secretary”

Gutting the law that has protected the bald eagle, the American crocodile, the gray wolf, and countless other animals from extinction over the past four decades, the Trump administration gave its latest handout to corporate interests on Thursday when it unveiled sweeping changes to the Endangered Species Act (ESA).

“These regulations are the heart of how the Endangered Species Act is implemented. Imperiled species depend on them for their very lives,” said Jamie Rappaport Clark, a former director of the U.S. Fish and Wildlife Service who is now president of Defenders of Wildlife, in a statement. “The signal being sent by the Trump administration is clear: Protecting America’s wildlife and wild lands is simply not on their agenda.”

This is unacceptable. The ESA is a wildly successful piece of legislation that has prevented 99% (!!) of the species it protects from going extinct. Help us stand up to the Trump administrations’ attacks on the ESA: https://t.co/4UeRULB0hW https://t.co/XyAhBUcRXZ

Under the newly proposed guidelines, the Interior Department would direct the U.S. Fish and Wildlife Service and National Oceanic and Atmospheric Administration (NOAA) to take economic impacts into consideration when deciding whether to protect species—potentially allowing corporations to move ahead with projects that would otherwise be prohibited.

The department also proposed that it should stop extending similar levels of protection to animals and plants regardless of whether they are listed as “endangered” or “threatened,” and would remove protections for “take”—the harming or killing of species—for animals that have been newly added to the “threatened” list.

If approved by the administration, critics said, the rollback of the law—which has the approval of 90 percent of Americans—will solidify the Trump administration’s legacy as one which put the interests of corporations ahead of the well-being of wildlife.

“These proposals would slam a wrecking ball into the most crucial protections for our most endangered wildlife,” Brett Hartl, government affairs director at the Center for Biological Diversity, said in a statement. “If these regulations had been in place in the 1970s, the bald eagle and the gray whale would be extinct today. If they’re finalized now, Zinke will go down in history as the extinction secretary.”

The ESA was enacted in 1973 and has become “one of the most successful environmental laws in U.S. history,” according to the Center for Biological Diversity—currently protecting more than 1,600 species from extinction. Less than one percent of species have gone extinct once listed under the Act, as the regulations have kept fossil fuel companies, loggers, and developers from interfering with their habitats as well as protecting many species from hunting.

“This proposal turns the extinction-prevention tool of the Endangered Species Act into a rubber stamp for powerful corporate interests,” said Hartl. “Allowing the federal government to turn a blind eye to climate change will be a death sentence for polar bears and hundreds of other animals and plants.”