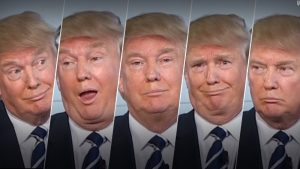 The many faces of Trump / CNN Screen Capture

In their own words – opinions of Trump among supporters and opponents.

Just prior to the 2016 election, the public had fairly low expectations for Donald Trump’s presidency. Majorities of Americans said that if Trump was elected, he would not be likely to improve the way government works, set a high moral standard for the presidency or achieve other goals. 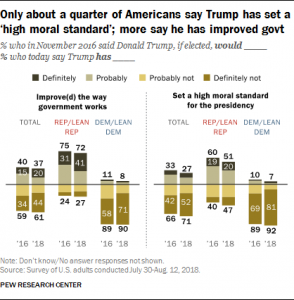 And for the most part, the public’s current evaluations of Trump’s administration across these dimensions vary little from these pre-election predictions.

These overall views are little different from the public’s pre-election 2016 perceptions of what Trump would do if elected: Before the election, 59% anticipated that Trump would not improve the way government works and 66% thought he would not set a high moral standard for the presidency.

But more than a year and a half into his presidency public assessments are now more definitive: For example, today 44% say Trump has definitely not improved the way government works, up from 34% who said he definitely would not in 2016; but at the same time, the share saying he definitely has improved government function is up from 15% to 20%.

Trump’s polarizing personality. Trump’s personality continues to be a positive aspect of his presidency among those who approve of his job performance (40% of the public) – and a source of concern among many of those who disapprove. Asked an open-ended question about what they like most about how Trump is handling his job as president, a 60% majority of those who approve of his job performance cite an aspect of his approach or personality. Specific mentions of Trump’s policies or agenda are a distant second, mentioned by 20%. 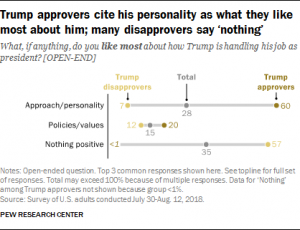 Some of those who cite Trump’s personality as what they like most about him point to his leadership, sticking to his convictions, and ability to get things done. Others say they appreciate how he speaks his mind, and is not like a typical politician.

Those who disapprove of the way Trump is handling his job (59% of adults) find little to like about his presidency. When asked what they like most about it, 57% say “nothing” or mention something they do not like about Trump. Just 12% were able to point to a specific policy approach they like, while another 7% mentioned an aspect of his personality or general approach.

When asked what concerns them most about Trump, those who disapprove of his job performance name several concerns. About three-in-ten (29%) mention his personality or conduct while roughly a quarter (24%) cite one or more policy positions and 16% describe him as dishonest or untrustworthy. 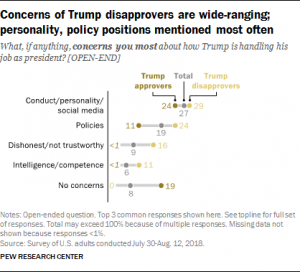 Trump’s approvers are generally less likely than disapprovers to offer a concern about him (19% say they have no concerns at all, and another 27% did not give an answer to the question). But among those who do cite concerns about him, aspects of his conduct – particularly his use of social media – are most commonly named. About a quarter (24%) of those who approve of the job Trump is doing as president say his conduct is a concern – including 13% who explicitly say his use of Twitter and other social media warrant concern. Another 11% mention a policy or policies that are worrying.

Before the election, a partisan divide in expectations for Trump; today, deep differences on his performance

At the end of the 2016 presidential campaign, Americans were pessimistic about the next administration – regardless of whether Trump or Hillary Clinton won the election. Majorities had low expectations for how both candidates would handle five specific areas. 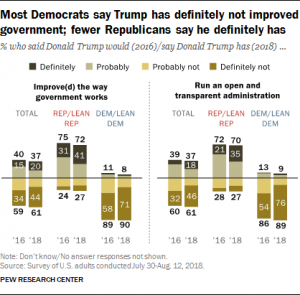 There are sharp partisan divisions in these evaluations: About seven-in-ten Republicans and Republican-leaning independents say Trump has definitely or probably improved the way government works (72%) and run and open and transparent administration (70%).

Larger shares of Democrats and Democratic leaners say he definitely or probably has not done this (90% say he has not improved the way government works; 89% say he has not run an open and transparent administration).

Across all five evaluations, sizable majorities of Democrats say Trump definitely has not achieved these goals. In each case, fewer than half of Republicans say he has definitely achieved them.

Across five evaluations in the survey, Trump gets his most negative ratings for setting a high moral standard for the presidency. The public’s pre-election expectations were already quite low: In November 2016, just 33% of Americans said that if Trump was elected he definitely or probably would set high moral standard for the presidency; twice as many (66%) said he definitely or probably would not do this. 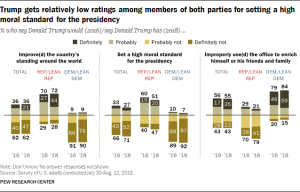 Similarly, before the election an overwhelming share of Democrats (91%) said Trump would definitely or probably not improve the country’s global standing; today, 90% say he has not achieved this objective. Republicans’ views also have changed little since before the election: Currently, 72% say he has improved the U.S. global standing; 70% expected he would do this before his election victory.

And while 84% of Democrats say Trump has improperly used his office to enrich himself, his family or friends, 79% expected he would do this before the election. Prior to the election, just 29% of Republicans said Trump definitely or probably would use the office of the presidency for personal gain; today, even fewer Republicans (21%) say has definitely or probably done this.

In assessments of whether Trump has set a high moral standard for the presidency, a majority (60%) of those who identify as Republicans say Trump has definitely or probably done this, while 39% say he has not. 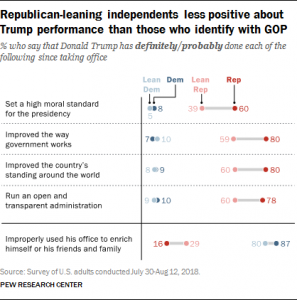 The balance of opinion is flipped among independents who lean toward the Republican Party. A majority (59%) say he is definitely or probably not upholding high moral standards, while 39% say he is.

A 20-point gap on assessments of Trump can be seen on other issues as well. Unlike views of whether Trump is setting high moral standards for the presidency, however, majorities of both Republicans and Republican leaners rate him positively in other areas.

Trump approvers and disapprovers in their own words 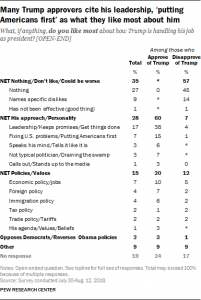 Among those who approve of Trump’s job performance, a majority (60%) point to aspects of his personality – including his leadership style, ability to get things done and putting Americans first – as what they like most.

Far fewer (just 20%) cite a policy, or his agenda and values. Among these approvers, just 10% mention the economy or economic policy or jobs, and 6% cite immigration policy.

Among those who disapprove of Trump, 57% could not name anything they like most, including 45% who say “nothing” and 14% who list things they do not like about Trump. 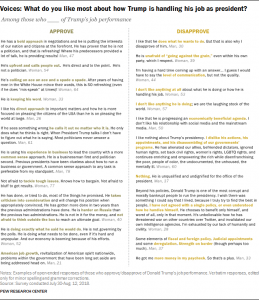 When asked what concerns them most about the way Trump is handling the presidency, those who disapprove of his performance list numerous shortcomings: 29% cite Trump’s personality and conduct, 24% mention one or more of his policies, 16% say he is dishonest or untrustworthy and 11% raise concerns over his intelligence and competence. 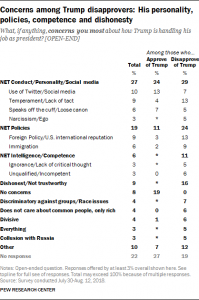 Trump’s handling of race issues – perceptions that he is discriminatory or racist – are mentioned by 7% of those who disapprove of him, while 5% cite “collusion with Russia” and 5% also say “everything.”

Those who approve of Trump’s job performance also raise a variety of concerns about him, though close to half (46%) either have no response to this question (27%) or say they have no concerns (19%). Among those who do mention a concern, 24% cite his personality – with half of those pointing to his use of Twitter.

For the most part, the open-ended responses about Trump – both positive and negative – are similar to opinions expressed in a survey about a year ago, in August 2017. 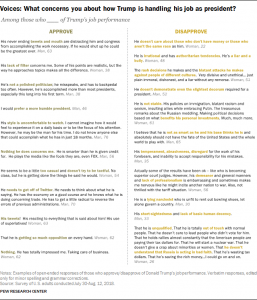 Nearly two years into his presidency, the public continues to have somewhat mixed views about Trump’s ideology. About a quarter (26%) say Trump has conservative views on almost all issues, while another 32% say he is conservative on most issues.

Another 31% say Trump has a mix of conservative and liberal views, while 7% say has liberal views on most or almost all issues. 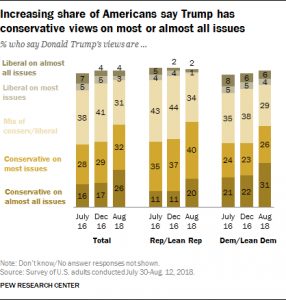 The share of Democrats and Democratic leaners saying Trump has conservative views on most or nearly all issues also has increased. Nearly six-in-ten Democrats (57%) now say his views tend to be conservative, up from 46% shortly after the election.

Among Republicans, conservatives are more likely than moderates and liberals to characterize Trump’s views as conservative. 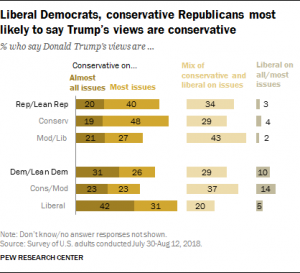