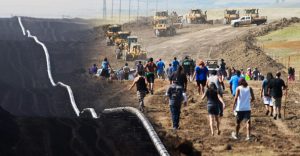 Donald Trump has no real platform other than be afraid, be very afraid. In Trump’s imaginary world, we are all about to be wiped out by terrorists, but not the gun toting right-wing Trump follower type. No, we’re all about to be killed by green card holding people from countries from the Middle East, but not actually from the countries that have ever attacked us. Earlier in the week, Trump’s Press Secretary said this:

“I don’t think it should be any surprise that the president, when it comes to rooting out radical Islamic terrorism, which is what that initially was supposed to be focused on, he is going to make sure that that is a major focus of his — keeping this country safe,” Spicer said.

If that’s the case, then why the hell is the FBI terrorism task force worried about some peaceful protesters in the Midwest?

The Guardian reports that the Trump administration has its FBI terrorism task force harassing people who are protesting the Dakota Access Pipeline in North Dakota, instead of working to protect the lives of, you know, the American people. Instead, Trump seems to be redefining the word terrorism to fit anyone who interferes with his corporate or personal agenda. In this case, it’s people who might interfere with oil company profits.

“The idea that the government would attempt to construe this indigenous-led non-violent movement into some kind of domestic terrorism investigation is unfathomable to me,” said Lauren Regan, a civil rights attorney who has provided legal support to demonstrators who were contacted by representatives of the FBI. “It’s outrageous, it’s unwarranted … and it’s unconstitutional.”

Not only is this about enriching his buddies, but there is apparently a direct conflict of interest.

Trump, a former investor in Energy Transfer Partners, the Texas-based firm behind the pipeline, took executive action in his first week in office to expedite the project. On Wednesday, workers began drilling to complete the pipeline across the Missouri river.

There is so much that’s disconcerting about this. Three days after a right-wing Trump supporting actual terrorist shot up a mosque in Canada, Trump removed any mention of right-wing terrorism from the website. Instead, he said he wanted to focus strictly on Islamic terrorism. So where exactly do protesters in the Midwest, many of whom are Native American fit in? It’s simple, they don’t. Trump is creating a new police state. We are either with him or against him and if we are against him, well, we too could be called terrorists. Oh, and did I mention that he wants to torture terror suspects?