Back in May, we reported that Ohio pastor Frank Amedia was serving as a volunteer “liaison for Christian policy” for Donald Trump’s presidential campaign, setting up meetings for the candidate with conservative religious figures. Amedia, as we noted at the time, is part of a controversial movement of self-proclaimed “prophets” and once claimed to have single-handedly stopped a tsunami from hitting Hawaii.

On Wednesday, Amedia will be co-hosting an event in Columbus in which Trump will meet with pastors in an “intimate setting.”

Amedia sent out an invitation to the September 21 event on Saturday, writing, “I am honored to co-host with Rev. Darrell Scott this important convocation of Pastors and Leaders in Columbus, Ohio on Wednesday, September 21 to meet with Donald Trump in an intimate setting. I am extending an invitation to you and your pastors and leaders to be our special guests.”

According to the invitation circulated by Amedia, the event’s primary host will be pro-Trump Cleveland pastor Darrell Scott and will also feature Michael Cohen, the head of Trump’s “National Diversity Coalition,” who told a reporter last year that spousal rape doesn’t exist. 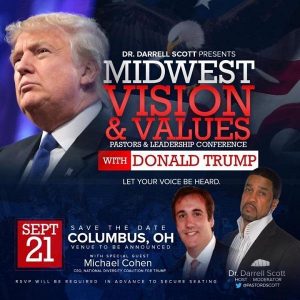 Along with claiming to have stopped a tsunami from hitting Hawaii, Amedia has called AIDS “a disease that comes because of unnatural sex” that can be avoided by those who choose a “wholesome life” and said that he’s ready to be thrown into a furnace in protest of LGBT equality.

In June, Amedia insisted that Trump had been “raised up” by God to help pave the way for the Second Coming.