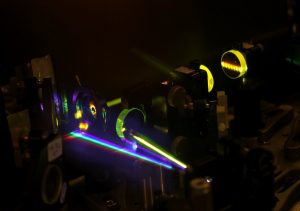 As we use more and more data every year, where will we have room to store it all? Our rapidly increasing demand for web apps, file sharing and social networking, among other services, relies on information storage in the “cloud” – always-on Internet-connected remote servers that store, manage and process data. This in turn has led to a pressing need for faster, smaller and more energy-efficient devices to perform those cloud tasks.

Two of the three key elements of cloud computing, microchips and communications connections, are getting ever faster, smaller and more efficient. My research activity has implications for the third: data storage on hard drives.

Computers process data, at its most fundamental level, in ones and zeroes. Hard disks store information by changing the local magnetization in a small region of the disk: its direction up or down corresponds to a “1” or “0” value in binary machine language.

The smaller the area of a disk needed to store a piece of information, the more information can be stored in a given space. A way to store information in a particularly tiny area is by taking advantage of the fact that individual electrons possess magnetization, which is called their spin. The research field of spin electronics, or “spintronics,” works on developing the ability to control the direction of electrons’ spins in a faster and more energy efficient way.

I work to control electrons’ spins using extremely short laser pulses – one quadrillionth of a second in duration, or one “femtosecond.” Beyond just enabling smaller storage, lasers allow dramatically faster storage and retrieval of data. The speed comparison between today’s technology and femtosecond spintronics is like comparing the fastest bullet train on Earth to the speed of light.

In addition, if the all-optical method is used to store information in materials that are transparent to light, little or no heating occurs – a huge benefit given the economic and environmental costs presented by the need for massive data-center cooling systems.

A decade ago, studies first demonstrated that laser pulses could control electron spins to write data and could monitor the spins to read stored data. Doing this involved measuring tiny oscillations in the electrons’ magnetization. After those early investigations, researchers believed – wrongly, as it turned out – that lasers could not affect or detect fluctuations smaller than the wavelength of the lasers’ own light. If this were true, it would not be possible to control magnets on a scale as short as one nanometer (one millionth of a millimeter) in as little time as a femtosecond. 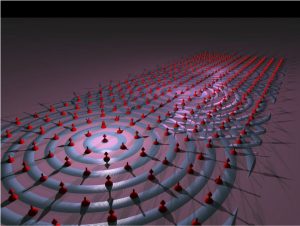 Very recently an international team of researchers of which I am a member has provided an experimental demonstration that such a limitation does not actually exist. We were able to affect magnets on as small as one nanometer in length, as quickly as every 45 femtoseconds. That’s one ten-millionth the size, and more than 20,000 times as fast as today’s hard drives operate.

This suggests that future devices may be able to work with processing speeds as fast as 22 THz – 1,000 times faster than today’s GHz clock speeds in commercial computers. And devices could be far smaller, too.

In addition to the practical effects on modern computing, the scientific importance of this research is significant. Conventional theories and experiments about magnetism assume that materials are in what is called “equilibrium,” a condition in which the quantities defining a system (temperature, pressure, magnetization) are either constant or changing only very slowly.

However, sending in a femtosecond laser pulse disrupts a magnet’s equilibrium. This lets us study magnetic materials in real time when they are not at rest, opening new frontiers for fundamental research. Already, we have seen exotic phenomena such as loss or even reversal of magnetization. These defy our current understanding of magnetismbecause they are impossible in equilibrium states. Other phenomena are likely to be discovered with further research.

Innovative science begins with a vision: a scientist is a dreamer who is able to imagine phenomena not observed yet. The scientific community involved in the research area of ultrafast magnetism is working on a big leap forward. It would be a development that doesn’t mean just faster laptops but always-on, connected computing that is significantly faster, smaller and cheaper than today’s systems. In addition, the storage mechanisms won’t generate as much heat, requiring far less cooling of data centers – which is a significant cost both financially and environmentally. Achieving those new capabilities requires us to push the frontier of fundamental knowledge even farther, and paves the way to technologies we cannot yet imagine.