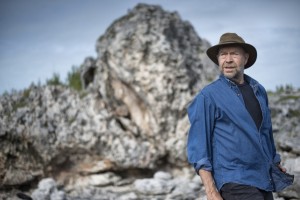 Climatologist James Hansen on the Eleuthera coastal ridge on Nov. 22, 2015, in Eleuthera, Bahamas. (Charles Ommanney for The Washington Post)

An influential group of scientists led by James Hansen, the former NASA scientist often credited with having drawn the first major attention to climate change in 1988 congressional testimony, has published a dire climate study that suggests the impact of global warming will be quicker and more catastrophic than generally envisioned.

The research invokes collapsing ice sheets, violent megastorms and even the hurling of boulders by giant waves in its quest to suggest that even 2 degrees Celsius of global warming above pre-industrial levels would be far too much. Hansen has called it the most important work he has ever done.

Read the following study conducted by Hansen and colleagues: