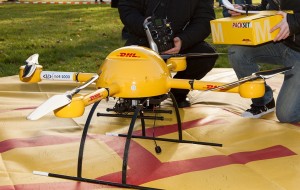 Taking off in a yard near you? Frankhöffner

Not long ago, most Americans could safely ignore congressional deliberations about Federal Aviation Administration authority, leaving the details to industry experts and lobbyists. But this time, we may need to fasten our seatbelts and actually read the card in the seat pocket.

A bill under discussion this week in Congress, an otherwise routine reauthorization of federal spending on the FAA, also sets the stage for the widespread use of unmanned aircraft systems (aka drones) at very low altitudes across the United States. This legislation could affect privacy, property, local control and even America’s position as a leader in innovation.

Federal authorities have, since the passage of the Air Commerce Act of 1926, controlled the navigable airspace starting hundreds of feet above us. But the lowermost airspace – our backyards, neighborhoods, business properties and campuses – has historically been the domain of the landowner and local governments.

The promise of lucrative new drone technologies appears to be upending this tradition.

Aviation industry proponents view the quiet space just above our homes as the next frontier in commercial aviation, a “public highway” for a multi-billion-dollar industry:

The FAA reauthorization now before Congress would lay the legal foundation for this. A section of the law would take federal control of all airspace, preempting state and local regulation of all aspects of unmanned aircraft flight, “including airspace, altitude, flight paths … [and] purpose of operations.” It might seem an innocuous clarification.

However, the FAA has recently started asserting that “Private landowners do not have any jurisdiction over the airspace above their property and cannot prohibit or allow aviation operations over their land” at any altitude, “from the ground up.” These “aviation operations” include Frisbee-sized drones and even toys.

These statements suggest the FAA intends to regulate drone flights much more tightly than it has handled model airplane and other low-altitude, lightweight aircraft flights in the past.

The federal penalty for “destruction of an aircraft,” apparently even a small unmanned one, is up to 20 years in prison.

Moving to protect research and innovation

Our nation’s colleges and universities have been hit particularly hard by these growing restrictions. U.S. researchers face severe limits on putting anything in the air, even a few feet above the ground on university property.

Getting permission to fly for scholarly purposes involves lots of paperwork and usually requires researchers to use specific commercial drones operated by a licensed pilot. With restrictions like that, is not surprising that 70 percent of the unmanned aircraft that the FAA has approved for commercial use are engineered and manufactured in China.

To address this concern, U.S. senators Gary Peters (a Michigan Democrat) and Jerry Moran (a Kansas Republican) recently introduced the Higher Education UAS Modernization Act. Backed by nearly 30 U.S. universities and three higher-education associations, it would allow researchers to fly drones at low altitudes for research and educational purposes, while preventing academics from using drones to “survey, create a nuisance on, or overfly private property without the permission of the owner of the private property.”

In other words, if the bill passes – as it should – university drones will be free to educate our students and support cutting-edge research in fields as diverse as aeronautical engineering, archaeology and agriculture. But they won’t invade your backyard, photograph you on your patio, or disrupt your quiet afternoon.

This is a good first step. But we also need a broader national discussion about how commercial and recreational drones should operate near the ground – in the space where we live, work and play – while respecting landowners and maintaining a sensible balance between federal, state and local control.

These issues are simply too important to leave up in the air.