The rise in recent decades of diseases such as inflammatory bowel disease and rheumatoid arthritis suggests that factors in the environment are contributing.

In 1932, New York gastroenterologist Burrill Crohn described an unusual disease in 14 adults. The patients had bouts of abdominal pain, bloody diarrhea, and lesions and scars on the bowel wall. Doctors in other parts of North America and Europe were seeing it in their patients, too. They called the rare condition Crohn’s disease. After World War II, the number of new people getting inflammatory bowel disease (Crohn’s disease and a related condition called ulcerative colitis) skyrocketed across the West in countries such as the U.S., Canada and the UK. In the last three decades, IBD has begun to crop up in newly industrialized parts of the world like Hong Kong and China’s big cities.

Other conditions, such as type 1 diabetes, rheumatoid arthritis and multiple sclerosis, are becoming more common, too. These diseases affect different parts of the body, but they all have one thing in common — they’re marked by a malfunctioning immune system. Doctors call these illnesses immune-mediated diseases. (Autoimmune diseases are a subset of these, though the terms often are used interchangeably in the popular press.) More than 100 conditions fall into this category. For the most part, these diseases are chronic and cause long-lasting disability. Most were rare or completely unknown until recently, but now constitute what some experts call an epidemic. In Hong Kong for instance, the incidence of IBD spiked 30-fold between 1985 and 2014.

“If you look at the past 100 years, you see a huge explosion of diseases that haven’t been seen at any other time in human history,” says Gil Kaplan, a gastroenterologist at the University of Calgary.

No one knows for sure what’s behind the increase in immune-mediated disease. However, Kaplan and others are now discovering that human-wrought environmental changes may play a major role.

The immune system protects us from infection by attacking disease-causing organisms and substances that enter the body. But in people with immune-mediated diseases, the cells of the immune system go rogue and start to attack healthy tissues. “We don’t really know why the immune system goes wrong in most cases of disease,” says Michael Pollard, an immunologist at The Scripps Research Institute in La Jolla, California.

Genes likely play a major role, he says. But genes alone can’t account for the recent spikes in disease incidence, since genetic factors rarely cause big shifts in a single generation. 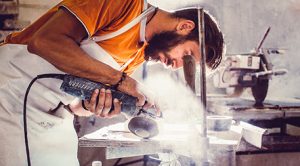 Some of the earliest evidence of environmental risk factors for immune-mediated disease comes from trades in which exposure to silica dust has been associated with onset of rheumatoid arthritis, lupus and scleroderma. Photo © iStockphoto.com/sanjeri

“Environment” here encompasses all the things we eat, drink and breathe — from food to industrial chemicals and the drugs we put into our bodies. Scientists refer to this entire landscape as the exposome — all of the exposures that come from outside a person’s body. And combing the exposome for disease triggers is a huge job.

Some of the earliest evidence of environmental risk factors for immune-mediated disease comes from the “dusty trades” — mining, quarrying, tunneling and stonemasonry. Researchers have long suspected that occupational exposure to silica dust may account for the higher rates of autoimmune rheumatic diseases, including rheumatoid arthritis, lupus and scleroderma (a skin condition) found in individuals working in these jobs.

But exposure to silica dust is rare and isn’t a factor for most people with these diseases, says Sasha Bernatsky, an epidemiologist at McGill University in Montreal. She’s investigating a more ubiquitous airborne pollutant — fine particulate air pollution generated by activities such as fossil fuel combustion. Exposure to fine particulates “affects millions of North Americans and thus is potentially a much more important exposure than most other environmental factors evaluated to date,” she says.

Bernatsky and colleagues have found that air pollution exposure — a hallmark of modern life — may be associated with a number of autoimmune rheumatic diseases in regions of Alberta and Quebec, Canada. Tiny air pollution particles can trigger immune system cells that cause inflammation, a potential pathway for an aberrant immune response, say the researchers. Previous studies have suggested that air pollution may play a role in the development of IBD.

Researchers are also probing larger societal shifts wrought by industrialization. A sedentary lifestyle may increase risk of Crohn’s disease. And some studies have shown that use of antibiotics during childhood may be a risk factor for Crohn’s disease. 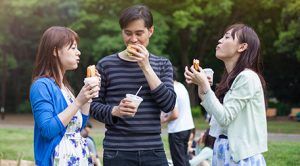 Researchers are probing larger societal shifts such as changes in diet for their possible links to spikes in IBD. Photo © iStockphoto.com/eli_asenova

Across Asia’s rapidly urbanizing regions, a change in eating habits may be one of the most pronounced fingerprints of environmental change, says Siew Ng, a gastroenterologist at The Chinese University of Hong Kong. In one generation, Asian diets have shifted to look more like those in the West.

“A couple decades ago there was an emphasis on fresh food. Now people eat more processed convenience foods,” Ng says. She’s initiated a large study across nine Asian countries to look at environmental risk factors for IBD. She hopes to determine whether factors such as dietary change may be linked to the spikes in IBD in those countries.

The Environment Inside Us

How exactly environmental factors such as air pollution or urbanization may increase disease risk in some people remains a puzzle. But scientists are beginning to put together the pieces. So far, many signs lead to the gut and its microbiome — the trillions of microscopic bacteria, viruses and fungi that reside there.

“In the last decades, we’ve started to think about the environment as two entities — the one around us and the one inside us,” says Kaplan.

“Everything that comes into our body has to go through the microbes first,” says Karen Madsen, a microbiologist at the University of Alberta. Some of the microbes in the gut are helpful. Others are harmful. A healthy gut depends on just the right balance. Some of the substances that enter our bodies have the ability to change the natural composition of those microbes, tipping the balance toward the harmful ones.

A bad balance of microbes can lead to an errant immune response, Madsen explains. People with IBD and other immune-mediated diseases tend to have fewer protective bacterial species and more potentially harmful ones. Madsen and others are studying what environmental factors are changing the microbiome, the repercussions of those changes and how to fix them.

Ng is asking similar questions in Asia. There’s a much higher incidence of IBD in China’s major cities than in the countryside. So Ng, along with her research on diets, is probing the rural-urban divide to see how the gut microbes of city and country dwellers differ.

Kaplan says that studies like Ng’s, which elucidate the links among IBD, the microbiome and the immune system, could help people with other immune-mediated diseases.

More than 200 genes are known to increase a person’s chances of getting IBD. Many of those same genes have been linked to an increased risk of other immune-mediated diseases such as multiple sclerosis or rheumatoid arthritis, explains Kaplan.

“Many of those genes relate to how the body’s immune system interacts with microorganisms in the gut,” he says. In other words, it’s possible there are some people with genetic susceptibility to a number of immune-mediated diseases given the right environmental exposures.

Understanding those microbiome-immune system interactions can give us clues about who those susceptible people are, Madsen says. That knowledge, along with knowledge of the most important environmental risk factors, could be used to both prevent disorders and devise treatments for afflicted individuals — helping to stem the rise of these devastating disorders and reduce the growing toll they take on human lives around the world.