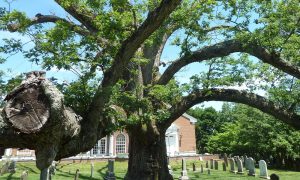 Amid this year’s titanic political and social upheavals, the town of Basking Ridge, New Jersey, found time for quiet mourning. One of the East Coast’s most famous trees, a centuries-old great white oak that spread its serpentine limbs over a cemetery beside the Basking Ridge Presbyterian Church, was dying. In October, the tree was pronounced dead; a month later, distraught residents held a memorial service.

To mourn a tree as if it were human is understandable, even natural. There are ways, after all, that trees really are like us. We appear to share a basic body plan, with thick structures stabilising us on the ground and thinner limbs reaching into space. Inspired by recent research into plant communication and nutrient sharing through underground root networks, the ecologist Peter Wohlleben in The Hidden Life of Trees (2016) even writes about trees as familial and socially networked. Tree-like characters also appear in mythology, from Daphne (whose arboreal transformation helped her escape the amorous Apollo) to the forest-dwelling Ents in The Lord of the Rings.

But when we give trees our own attributes, we should realise that we are misleading ourselves. We are seeing the tree not as a tree but, essentially, as a person. The great naturalist John Muir chastised his contemporaries for assuming that trees would ‘bemoan their imprisonment rooted in the ground’. In the nearly eight decades since those words were written, there has been no shortage of tree anthropomorphising, but it has shed little light on actual trees. Rather, we have blinded ourselves to more profound realities that could help us better appreciate our own place in the natural world.

Trees are indeed like us in some ways: they grow, they respire, they metabolise, they pass on genetic information via DNA. But in just as many ways they are not like us. They cannot move from the place where they take root, and must get everything they need to live under this constraint. They make their own food from sunlight, carbon dioxide and water. They respond to their environment on vastly slower time scales. Most significantly, I would argue, they do not age like us or die like us.

Every old tree sheds parts of itself over the years. The Basking Ridge oak, for example, lost limbs and part of its interior, and eventually had to be held together with cement and cables. Still, year after year, it made sugar in its leaves and drank water from the ground. In his book Wild Trees (2007), the writer Richard Preston describes California redwoods whose tops broke off, perhaps centuries ago. Yet these redwoods live on, too, incubating entire ecosystems in their crowns 300 feet above the ground.

For humans, ageing invariably leads to loss of function and eventual death. When we lose a limb, it’s a major loss. In the terrible event that we lose a head, it’s game over. For trees, it is almost the opposite: the older they get, the better they get at being trees. The rate at which they sequester carbon increases each year, and the amount of life they can sustain increases proportionally. Scientists know of no fundamental reason why trees must inevitably die, and many times one or more genetically identical ‘scions’ grow where a mature tree once stood. There is no equivalent reincarnation in the human world.

Even when a tree dies, it continues to give life. First it nourishes insects that bore into its wood and birds that eat them. Eventually it falls, rots, and becomes a seed bed for new trees and plants, turning into a long, linear mound, whose original identity can be divined only by an astute observer. ‘A tree has half its life as a live tree, and then a second life as a rotting log,’ is how University of Wisconsin-Madison ecologist Don Waller put it to me. In other words, as long as you’re in a forest, there’s no need to mourn a fallen tree.

When a loved one passes, we grieve because we recognise that even among the 7.4 billion living today, or all who will be born in the future, the person we loved is unique. No one else will have the exact same genes and epigenome and, more to the point, none will have the exact same mix of personality quirks, intelligences and talents. Projecting that same individuality onto a tree risks veering into imaginary nonsense, however. Trees become notable precisely when their ecological context has been removed – when they are not fully their natural selves.

What made the Basking Ridge oak a celebrity was its age, its shape, and its intersection with human history. The surrounding land was cleared by colonial settlers, allowing the tree to grow out instead of up, and develop a Medusa-esque arrangement of curving limbs that made it identifiable in a photo, even stripped of locational cues. Sitting beside a church established in 1717, it served as a preaching site during the Great Awakening, sheltered George Washington and Marquis de Lafayette along with their soldiers, and eventually came to define a town.

Yet from an ecological point of view, the Basking Ridge oak led a rather poor life. It surely did some of the common things trees do, such as produce seed and shelter birds and mammals, but it was not able to fully share nutrients with other trees below ground. Since it is surrounded by human structures that need to be protected from falling limbs, it will be deprived of its second life as well. Instead, it will be carved up and removed, never to nurture the next generation.

The human concept of individuality, so strongly associated with the Basking Ridge oak, has far less meaning in a tree’s proper home. Trees in a temperate forest typically live among hundreds or thousands of members of the same species; they might vary slightly genetically but they are identical functionally. A grove of almost 50,000 quaking aspens in Utah appears to share a single root system and is regarded as a single colony, perhaps tens of thousands of years old, possibly much older. The loss of any one of those aspens is trivial, like clipping a fingernail.

As members of a species that hopes to thrive well into the future, we might take a lesson from the ecological success that trees have achieved by choosing the communal, rather than the individual, life. Despite the extensive deforestation of the US by the mid-20th century, very few of its hundreds of native tree species have been lost in the wild. Globally, forests still claim around 30 per cent of Earth’s land area. When a farm or lot is abandoned, except in extremely cold or dry areas, trees are what come back – and fast. If through global warming, nuclear war or other means we ever make Earth uninhabitable for us, trees will still be here.