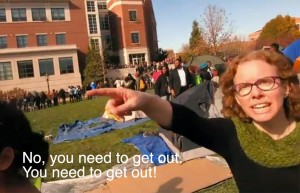 Melissa Click, a University of Missouri professor who teaches communication and journalism, was caught on tape threatening a journalist for covering a campus protest. She was subsequently fired for this and other such incidents she incited.

The French political journalist and supporter of the Royalist cause in the French Revolution, Jacques Mallet du Pan, famously summarized what often happens to extremists: “the Revolution devours its children.” I was thinking about this idiom—and its doppelgänger “what goes around comes around”—while writing a lecture for a talk I was invited to give at my alma mater California State University, Fullerton on the topic: “Is freedom of speech harmful for college students?” The short answer is an unflinching and unequivocal “No.”

Why is this question even being asked? When I was in college free speech was the sine qua non of the academy. It is what tenure was designed to protect! The answer may be found in the recent eruptions of student protests at numerous American colleges and universities, including Amherst, Brandeis, Brown, Claremont McKenna, Oberlin, Occidental, Princeton, Rutgers, University of California, University of Missouri, Williams, Yale, and others. Most of these paroxysms were under the guise of protecting students from allegedly offensive speech and disagreeable ideas—defined differently by different interest groups—with demands for everything from trigger warnings and safe spaces to microaggressions and speaker disinvitations.