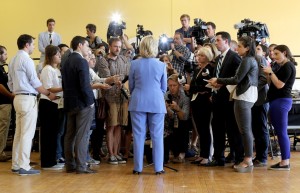 Last week, President Obama criticized journalists covering the election for “the practice of drawing ‘false equivalences’ between competing claims made by politicians.”

“If I say the world is round and someone else says it’s flat, that’s worth reporting,” he said. “But you might also want to report on a bunch of scientific evidence that seems to support the notion that the world is round.”

Unfortunately, it is not so simple.

In an ongoing research project, I have been using game theory to study how, in the right circumstances, a political party can make excessive demands in negotiations, lie brazenly, or otherwise behave in unusual and problematic ways. They’re often able to do this because journalists today are ill-equipped to stop it or bring attention to it.

While I don’t have a solution, I can at least point out a culprit: partisan media outlets, which put objective journalists in an impossible bind that I call “the journalist’s dilemma.”

Unless they want to be accused of bias, journalists must pretend that the objective truth is always the precise midpoint between the Democrats’ and Republicans’ positions based on the premise that the parties are equally extreme, equally dishonest, and equally guilty of all other political sins.

But to quote “Porgy and Bess,” it ain’t necessarily so. And when it’s not, there isn’t much that journalists can do about it.

The problem is opinion-based journalists – not merely their behavior, but their proliferation.

Gone are the days when the public was limited to a few broadcast networks and a few newspapers striving for some form of balance. Today, news consumers can choose from Fox News, MSNBC and Internet news sources of every imaginable persuasion.

Simply by occupying so much space in the media landscape, party-aligned media make it difficult for voters to distinguish between valid criticism of one party and biased reporting from a partisan shill.

In so doing, partisan media make it possible – and worse yet, rational – for voters to dismiss any one-sided criticism as biased, thereby enabling extremism and dishonesty.

Some lies are bipartisan. For example, many politicians will underestimate the cost of their favorite programs, and overestimate their benefits.

Take the architect of modern Republican budgetary policy, Speaker Paul Ryan. While he insists that his goal is to reduce the deficit, his budgets specify large tax cuts but don’t detail how they will be paid for.

On the other side of the aisle, Senator Bernie Sanders has been at odds with liberals like Paul Krugman because his economic plan assumes an absurdly high 5.3 percent rate of economic growth. Part of Krugman’s criticism of Sanders is that he gives critics on the right, as well as those who insist that the parties are equivalent, an opening to argue that Democrats are just as dishonest Republicans.

And then there’s Donald Trump. The man currently leading the Republican presidential contest rose to prominence in the party by promoting the debunked conspiracy theory that President Obama was secretly born in Kenya.

Birtherism is different from conventional, Ryan/Sanders-style dishonesty. It is a lie so absurd that in normal circumstances, journalists can dismiss it. When Trump was pushing the issue in 2011, few journalists in the unaligned press felt the need to grant it plausibility, and they didn’t need to do so because at the time, Trump was little more than a reality TV star.

If he wins the Republican nomination, though, journalists will be unable to dismiss him – no matter how egregiously he lies.

What will Trump say if he gets the nomination? We don’t know, but he has a fondness for peddling absurd conspiracy theories, whether it’s suggesting that Justice Scalia was murdered or advancing anti-vaccination myths.

Then there’s Hillary Clinton. Journalistic fact-checking is not without problems, but it can be useful. PolitiFact currently rates 28 percent of Clinton’s checked statements as “mostly false” or worse. She isn’t a paragon of honesty, but she didn’t achieve her lead in the Democratic contest by peddling anything comparable to birtherism.

Suppose the contest comes down to Clinton and Trump. When covering the race, the unaligned press could obey journalistic norms of balance, and pretend that Clinton’s normal, everyday lies are no different from whatever conspiracy theories Trump might embrace.

The problem is that doing so would not only allow the more egregious liar to escape punishment, but it would actually give candidates incentives to tell even crazier lies. After all, if nobody will call you more dishonest than your opponent, why constrain yourself to the truth?

On the other hand, journalists could point out that one candidate is an ordinary liar, and the other’s dishonesty is world-class.

We know what happens next – the latter complains about media bias. Consider the backlash against Candy Crowley when she intervened on President Obama’s behalf during a 2012 presidential debate.

Both parties must agree on presidential debate moderators, and Republicans will never again agree to let Crowley moderate a debate. Unless journalists want to face that kind of blowback, they must assert that Democrats and Republicans are always equally honest (or dishonest).

Most importantly, what about voters? If a journalist calls one candidate a liar – and that candidate calls the journalist a shill for his opponent – whom should a voter believe?

A voter can think one of two things. Either one candidate is a bigger liar than the other, or the journalist is biased.

But if the media landscape is littered with partisans while the unaligned press continually tells us that both parties are equally dishonest, then the voter’s reasonable conclusion will be that both candidates are equally dishonest, and anyone saying otherwise is just a partisan operative. Distressingly, voters are being rational when they discount one-sided criticism.

And it gets worse. The more often conventional journalists insist that both parties are equally guilty of all sins in order to avoid accusations of bias, the more voters believe it. The more they believe it, the more likely they are to discount any future claims that one party is more dishonest. The whole thing is a vicious cycle.

Notice that the partisan shills create the problem by existing rather than taking any direct action. 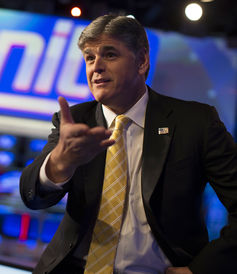 Sean Hannity will always criticize the Democrat and defend the Republican. Al Sharpton will do the reverse. The latter even admitted that he would never speak ill of President Obama in a 2011 interview with “60 Minutes.”

So if a journalist calls Trump a liar, should voters believe it? Or should they conclude that the journalist is a Democratic shill, like Al Sharpton?
Notice, too, that Sean Hannity is not the one who helps a Republican get away with lying. Al Sharpton enables Republican liars by making it credible for Republicans to accuse any journalists criticizing them of being Democratic shills, like Sharpton.

Meanwhile, Hillary Clinton could lie as brazenly as she wants, and accuse anyone who criticizes her of being part of the “vast, right wing conspiracy” (to use the phrase the Clintons popularized in the 1990s). Since Sean Hannity really will call her a liar no matter what, unaligned journalists can only go so far without looking like conspirators. Hannity’s existence merely enables Clinton, if she chooses to go down that path.

Is there a way out? We found one before. In the 19th century, newspapers were party-owned operations who made no pretense to independence or objectivity. The modern concept of journalism didn’t come into being until the muckracking era at the beginning of the 20th century – in particular, the work of Upton Sinclair, Lincoln Steffens and others who became the progenitors of investigative journalism.

We now operate in something closer to the old system, with a media landscape infested with party-aligned outlets. However, many don’t even acknowledge their leanings, complicating voters’ decisions.

It is possible, though, that Trump changes the rules of the game.

As I have written elsewhere, the journalistic challenge of trying to interview Trump, who is as much performer as candidate, makes his relationship with the press uniquely conflicted. If his party fails to unify around him, journalists may have political “cover” to point out his more blatant dishonesty.

However, they do so at risk to themselves – a risk created by the mere existence of partisan journalism.