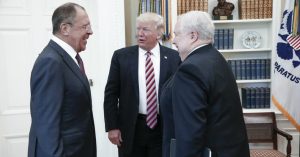 A handout photo made available by the Russian Foreign Ministry on May 10, 2017, shows U.S. President Donald J. Trump (C) speaking with Russian Foreign Minister Sergei Lavrov (L) and Russian Ambassador to the U.S. Sergei Kislyak during a meeting at the White House in Washington, D.C. (HO / AFP/Getty Images)

Among the revelations in Monday evening’s bombshell Washington Post report on President Donald Trump disclosing classified information to Russian diplomats is the fact that one U.S. counterterrorism official “called for the problematic portion of Trump’s discussion to be stricken from internal memos and for the full transcript to be limited to a small circle of recipients, efforts to prevent sensitive details from being disseminated further or leaked.”

Now, amid outrage, calls are growing for that transcript to be released—if not to the public at-large, than at least “to Congress for investigative purposes,” as National Memo editor-in-chief Joe Conason wrote Tuesday.

“[T]he House and Senate intelligence committees should request—or if necessary, subpoena—the transcripts of Trump’s meeting with the Russians, to see who is telling the truth,” Conason insisted. “To paraphrase Trump, that may be the only way to ‘find out what the hell is going on’.”

In turn, he continued, it may be the only way to see if there are grounds for impeachment. (Notably, U.S. press was not allowed into the meeting between Trump and the Russian officials.)

Trump admitted Tuesday morning that he did share “facts” about a threat from the Islamic State (ISIS) during a meeting last week with the Russian foreign minister, Sergei Lavrov, and the Russian ambassador to the U.S., Sergey Kislyak. The president declared in a tweet that he had an “absolute right” to do so.

This goes against denials by top administration officials, and comes on the heels of Trump himself saying last week that it was nigh impossible to expect accuracy from his surrogates.

The cumulative effect, one Republican consultant told Politico, is that the administration’s “credibility is completely shattered.”

“They’ve engaged in serial lying to the American people on issues big and small—beginning with the crowd size photos,” said Steve Schmidt, former campaign manager for John McCain. “It’s unprecedented for an administration, from the top on down, to embrace a strategy of deception and lying.”

Added Stu Loeser, a longtime press secretary to former New York Mayor Michael Bloomberg: “If you’ve blown your credibility on crowd size or semantics, people say: What else are they going to lie about?”

That’s why, as Conason and others now argue, we must turn to the full transcript.

For the purpose of transparency, the White House should share a transcript of the meeting with the House and Senate intelligence committees.

So far, the only explicit calls for releasing the transcript have come from Democrats. But with Republicans increasingly demanding answers from the administration, could it be the nail in Trump’s coffin?

The administration should promptly share with Congress, in a classified setting, the precise details of the president’s meeting. https://t.co/KDthfYbXvK

After all, “[t]his is not a partisan issue,” said Conason. “Only Congress, Republicans and Democrats acting together, can protect the nation from this incompetent, venal, and dangerous executive. They can no longer ignore the threat he poses to our security.”