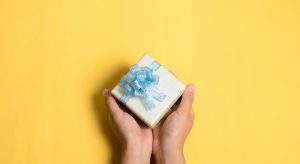 Wrapping paper is a striptease that hides and reveals, transforming otherwise ordinary objects into gifts.

The holiday season is here. That means presents under Christmas trees, next to menorahs, accompanying Kwanzaa candles, traded at white elephant parties. All of these gifts, despite the sweeping breadth of beliefs that surround them, will likely share one thing in common: They will all be wrapped in a veneer of decorated paper.

This practice of cutting, folding, and fastening paper transcends cultural boundaries and religious doctrine. It is millennia old. The wrapping of gifts points to a more essential experience, a way humans have learned to frame objects to designate them as special.

The wrapping you will likely do in the weeks ahead is connected to the way a gilded frame turns a painting into art or the way a jeweled box turns a saint’s toenail into a sacred treasure. Wrapping an ordinary object is what transforms it into something extraordinary.

The size of the wrapping paper industry today is immense: In recent years, gift-wrap manufacturers have stated annual sales of between $3.2 billion and $9.36 billion. People in the U.S. reportedly throw away about 4 million tons of wrapping paper and shopping bags every holiday season—the same weight as nearly 11Empire State Buildings.

Wrapping paper is typically too light and inky for efficient recycling, and if it includes foil or plastic many recyclers won’t accept it anyway. That’s why some gift-givers are turning away from the instant trash of gift wrap to eco-friendly alternatives such as cereal boxes and recycled sweaters. Still, despite the persuasive environmental arguments against wrapping paper, it’s hard for most to imagine a gift without its ornate paper veil.

The Western emphasis on gift-wrapping emerged in Europe and the United States during the Victorian age, when it became fashionable to enclose presents in tissue and pretty bows. Then, in 1917, during the holiday season, a store in Kansas City, Missouri, ran out of tissue and turned to patterned paper made for lining envelopes. It quickly sold out. The store eventually became Hallmark, and the modern wrapping paper industry was born.

In 1979, the sociologist Theodore Caplow arrived in Muncie, Indiana, to study American rituals of giftgiving. After interviewing more than 100 adults about their experiences with Christmas, he discerned a series of rules. Among them: “Christmas gifts must be wrapped before they are presented.” Caplow learned that his subjects wrapped essentially every present—except those too large or awkward, like a bicycle—in paper. He concluded that wrapping allowed people to see piles of gifts under a tree “as a glittering monument to the family’s affluence and mutual affection.” It also gave the recipient a sense of gleeful surprise.

In 1990, the anthropologist James Carrier added another vital dimension to the study of gift-wrapping when he noted the parallel rise of modern-day gift-wrapping practices and industrial, mass-produced objects. Carrier argued that gift wrap transforms something impersonal into something personal—ritually turning an anonymous commodity into an idiosyncratic gift. In today’s terms, for example, the iPhone anyone can buy becomes, when wrapped, the iPhone I got for you. Carrier pointed out that this is why homemade gifts, such as a jar of jam, don’t require full wrapping. A simple bow around the top will do.

These studies tell us a lot about gift-wrapping in contemporary Western society. But the practice of wrapping, in a broader sense, has a much deeper history—one that suggests a more fundamental reason that people wrap, frame, and enclose particular objects.

Paper was used for wrapping before it was used for writing. In ancient China, some 2,000 years ago, paper was used to protect precious materials and store tea leaves and medicines. Later, the imperial court used paper envelopes to present gift money to government officials. About a thousand years ago, wrapping became a central tenet of gift giving in Japanese culture. In other words, people wrapped gifts long before the dawn of the industrial age.

The purpose of the wrap is encompassed within a broader human practice of using one object to frame another object as important. The art historian Cynthia Hahn has recently labeled this phenomenon the “reliquary effect.” In a new book, Hahn studies the practices of Catholic churches, Islamic mosques, and Buddhist monasteries to understand how things like a finger bone, a fragment of wood, and even motes of dust are made sacred. Her assumption is that most religious relics do not have an intrinsic worth, but must be “created socially” into an object with power. This is accomplished through the reliquary—the receptacle crafted to hold the relic. “The reliquary makes the relic,” Hahn writes. 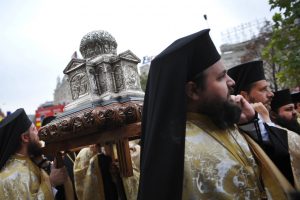 Reliquaries are typically beautiful, but they have a function that is more basic: To make clear that their contents—the relic that is enclosed in their interior space—is of value. Yet they must also fade into the background, suggesting that what is inside is never fully contained—that it “cannot be quarantined by physical confines,” in Hahn’s words. Think of the frame that surrounds an oil painting; it demarcates the image as “art” but is almost never intended to be part of the art it helps create.

The container sets the stage for a kind of striptease that both hides (you don’t know exactly what’s beneath) and reveals (you have a sense of what is within). And like erotica, Hahn observes, “the reliquary finds its purpose in stimulating attention and capturing desire.”

Many have grasped this performative power of the container. Museum curators use glass cases to designate an object as historical or beautiful. Undertakers place the ashes of the cremated in decorated urns to turn human dust into ancestors to be esteemed. Designers at Apple use elegant, pristine, white boxes with clever latches and pockets to make a mass-produced product feel as special as a diamond ring.

That’s how wrapping paper works: It frames an object as a gift. It is what turns, for example, the gift of a book into a gift itself. A book without wrapping paper could just as easily be on a library shelf or a nightstand. After all, even that homemade jam still requires a bow to signify that it is a gift.

So this holiday season, when someone puts a gift in your hands, consider the wrapping that envelops it. Take a moment to reflect on this human tradition—and to ponder the possibility that, were the gift you are holding not wrapped, it might not feel like a gift at all.