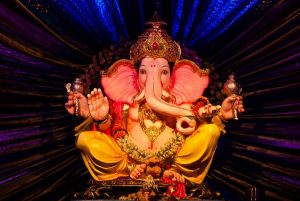 Offering food to deities in Hinduism has deep religious significance. And most Hindu deities are not served meat. 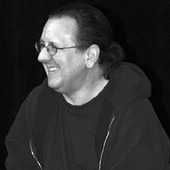 Vegetarianism is an important part of Hindu religious worship. To be sure, not all Hindus practice vegetarianism. According to a 2006 survey, only 31 percent of India’s population, home to the vast majority of the world’s Hindus, are vegetarian.

It is also true that there are some Hindu deities who are offered meat. Most famously, goats are regularly offered to the Hindu goddess Kali. Meat offerings are also not uncommon in Nepal, a majority Hindu nation.

But the vast majority of food offerings to Hindu deities today are vegetarian in nature. This author has witnessed, for example, offerings of gourds, cucumbers and bananas being made to the goddess Kali at worship services in both the U.S. and India, despite the fact that this goddess is considered to be fierce and is widely associated with animal sacrifice.

These food offerings have religious significance. After being reverently presented to the deities, they are distributed to worshipers as “prasad.” Prasad represents the blessing of the deities in return for the worship and devotion they have received.

Vegetarianism through the centuries

Hindu vegetarianism developed gradually. In ancient times there were Hindus who ate meat, including beef, and meat was part of many religious rituals.

Later texts condemn the violence in meat offerings. “Bhagavata Purana,” an ancient Hindu text from the Vaishnava tradition, for example, condemns violence against animals to feed oneself. In this tradition, the popular deity Krishna is also worshipped as the protector of cows.

“Manu Smriti,” considered to be the authoritative book on Hindu codes dating from roughly 300 to 100 B.C., also condemns meat-eating, saying,

“Whoever does violence to harmless creatures out of a wish for his own happiness does not increase his happiness anywhere, neither when he is alive nor when he is dead.”

Indeed, by the eighth century religious rituals had become largely vegetarian. It was at this time that an influential scholar and reformer, Shankara, promoted the replacement of meat offerings to Hindu deities with vegetarian substitutes. Meat, due to its association with death, came to be seen as ritually impure.

Today, roughly 55 percent of Brahmins in India are vegetarian.

Coming back to the ad, what does it mean for Hindus when Ganesha is depicted in an ad serving lamb?

For many Hindus, Ganesha is a beloved deity who is considered to be the “remover of obstacles.” As such, he is invoked at the start of any venture (including worship offered to other deities). Most recognizable for his elephant head, he is the son of Shiva, the supreme being for the Hindus and his consort, Parvati. 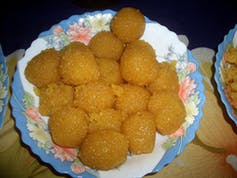 A plate of ladoos, the favorite sweet of Ganesha. v i p e z, CC BY-NC-ND

While at least one ancient text, the “Manava Gṛhyaśāstra,” suggests that at one time, Ganesha may have been offered meat, in contemporary practice this has been replaced with vegetarian food, the most popular of which is the “ladoo” – a delightful Indian ball-shaped sweet made from chickpea flour, usually yellow or orange in color. It is common for Ganesha to be depicted holding a plate of ladoos.

The chief rationale for vegetarianism is the principle of “ahimsa,” or doing no deliberate harm to any living being. This value is promoted not only in Hindu traditions, but among the Jains (a community that is almost exclusively vegetarian) and Buddhists in India.

While vegetarianism may not be universal among Hindus – nor have they always practiced it – the ideal it represents is held in high regard. This makes an image of Ganesha sitting down to eat lamb jarring, to say the least, for many Hindus.