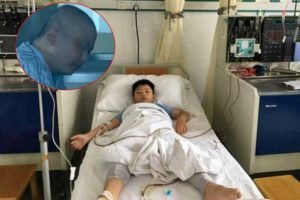 Cao Yinpeng, an 8-year-old from Xuzhou, East China’s Jiangsu province, underwent a rigorous fattening up regiment, in order to qualify for a bone marrow transplant necessary to save his father’s life.

Earlier this year, Cao’s father was diagnosed with leukemia and doctors told the family that he needed a hematopoietic stem cell transplant to survive. Unfortunately, there were no compatible donors within the China Marrow Donor Program, the Asian country’s marrow bank. The man’s parents were a match, but had to be ruled out due to their advanced age, which only left 8-year-old Cao Yinpeng. China’s marrow donor program website states that donors should be between the ages of 18 and 45, but doctors do make exceptions in desperate situations such as this. But while they agreed to operate on the boy to harvest the life-saving stem cells, they did make it clear that he had to reach the minimum donor weight requirement of 45kg to qualify for the procedure.

Asked if he was willing to go through the transplant procedure, the young boy immediately agreed, reportedly saying that he wanted to give his father a life, just as he had done for him. The only problem now was gaining another 11 kilograms of body weight in just a couple of months. For most adults, gaining weight fat is a lot easier than losing it, but for a growing boy fond of sports, putting on so much weight in such a short time span, without any adverse effects, is much more difficult than you might think.

First of all, Cao had to adhere to a very strict diet that allowed him to gain weight and generate enough blood, as doctors collected 700ml of his blood each week in preparation for the operation. His grandma cooked all his favorite dishes during the two month period, most of which contained lots of meat. 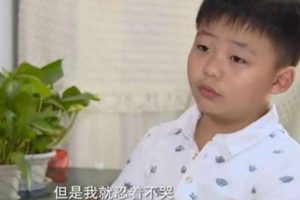 To make sure the extra weight stayed on, Cao Yinpeng also withdrew from various sporting events he had signed up for, and replaced all physical activities with a daily brisk walk. To make sure he didn’t catch any illness that might affect his fattening regime, Cao was isolated from his friends and schoolmates whenever any of them shown signs of sickness.

It was a trying time for the young boy, but he was determined to do whatever it took to save his father’s life, and in two months he managed to surpass the 45 kilogram threshold. He donated bone marrow on July 6, with doctors at Xuzhou Medical College Hospital telling local media the operation went smoothly. His father is currently still recuperating after the procedure, and the boy is struggling to lose the extra weight. 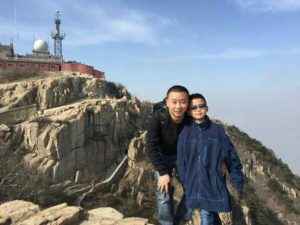 Unfortunately, the Chinese family’s worries are not yet over, as the transplant ended up costing them over 400,000 yuan ($59,879), which they paid by selling their apartment, but now the post operation treatment is stimated at another 400,000 yuan, which they cannot afford. It’s a big problem, but thanks to this remarkable little boy, at least they’ll be able to deal with it together.