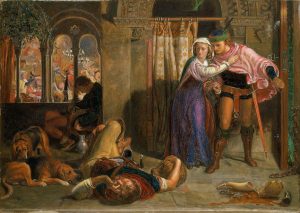 William Holman Hunt, The flight of Madeline and Porphyro during the drunkenness attending the revelry (The Eve of St. Agnes), smaller version of the painting exhibited at the Royal Academy, begun as a sketch, 1847-57, oil on panel, 355 x 252 cm (Walker Art Gallery, Liverpool)

At first they were three

During a visit to the Royal Academy exhibition of 1848, the young artist and poet Dante Gabriel Rossetti was drawn to a painting entitled The Eve of Saint Agnes by William Holman Hunt. As a subject taken from the poetry of John Keats was a rarity at the time, Rossetti sought out Hunt, and the two quickly became friends. Hunt then introduced Rossetti to his friend John Everett Millais, and the rest, as they say, is history. The trio went on to form the Pre-Raphaelite Brotherhood, a group determined to reform the artistic establishment of Victorian England.

Looking back to look forward

The name “Pre-Raphaelite Brotherhood” (PRB) hints at the vaguely medieval subject matter for which the group is known. The young artists appreciated the simplicity of line and large flat areas of brilliant color found in the early Italian painters before Raphael, as well as in 15th century Flemish art. These were not qualities favored by the more academic approach taught at the Royal Academy during the mid 19th century, which stressed the strong light and dark shading of the Old Masters. Another source of inspiration for the young artists was the writing of art critic John Ruskin, particularly the famous passage from Modern Painters telling artists “to go to nature in all singleness of heart . . . rejecting nothing, selecting nothing and scorning nothing.” This combination of influences contributed to the group’s extreme attention to detail, and the development of the wet white ground technique that produced the brilliant color for which they are known. The artists even became some of the first to complete sections of their canvases outdoors in an effort to capture the minute detail of every leaf and blade of grass.

And then they were seven

It was decided that seven was the appropriate number for a rebellious group and four others were added to form the initial Brotherhood. The selection of additional members has long mystified art historians. James Collinson, a painter, seems to have been added due to his short-lived engagement to Rossetti’s sister Christina rather than his sympathy with the cause. Another member, Thomas Woolner, was a sculptor rather than a painter. The final two members, William Michael Rossetti and Frederic George Stephens, both of whom went on to become art critics, were not practicing artists. However, other young artists such as Walter Howell Deverell and Charles Collins embraced the ideals of the PRB even though they were never formally elected as members. 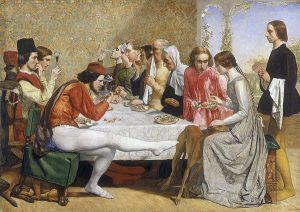 The Pre-Raphaelites decided to make their debut by sending a group of paintings, all bearing the initials “PRB”, to the Royal Academy in 1849. However, Rossetti, who was nervous about the reception of his painting The Girlhood of Mary Virgin, changed his mind and instead sent his painting to the earlier Free Exhibition (meaning there was no jury as there was at the Royal Academy). At the Royal Academy, Hunt exhibited Rienzi, the Last of the Tribunes, a scene from an historical novel of the same name by Edward Bulwer-Lytton. Millais exhibited Isabella, another subject from Keats, created with such attention to detail that one can actually see the beheading scene on the plate nearest the edge of the table, which echoes the ultimate fate of the young lover Lorenzo in the story. In both paintings, the accurately designed medieval costumes, bright colors and attention to detail produced criticism that the paintings mimicked a “mediaeval illumination of the chronicle or the romance” (Athenaeum, 2 June 1849, p. 575). Interestingly, no mention was made of the mysterious “PRB” inscription.

In 1850, however, the reaction to the PRB was very different. By this time, many people knew about the existence of the supposedly secret society, in part because the group had published many of their ideas in a short-lived literary magazine entitled The Germ. Rossetti’s Ecce Ancilla Domini appeared at the Free Exhibition along with a painting by his friend Deverell entitled Twelfth Night. At the Royal Academy, Hunt’s A Converted British Family Sheltering a Christian Priest from the Persecution of the Druids and Millais’s Christ in the House of his Parents, famously abused by Charles Dickens, received the brunt of the criticism.  In the aftermath of the humiliating reception of their work, Collinson resigned from the group and Rossetti decided never again to exhibit publicly.

Ruskin to the rescue 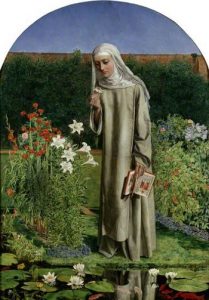 Undeterred, Millais and Hunt again continued to exhibit paintings demonstrating the beautiful colors and detail orientation of the mature style of the PRB. The Royal Academy of 1851 included Hunt’s Valentine Rescuing Sylvia, and three pictures by Millais, Mariana, The Woodman’s Daughter, and The Return of the Dove to the Ark as well as Convent Thoughts by Millais’s friend Charles Collins. Although many were still dubious about the new style, the critic John Ruskin came to the rescue of the group, publishing two letters in The Times newspaper in which he praised the relationship of the PRB to early Italian art. Although Ruskin was suspicious of what he termed the group’s “Catholic tendencies,” he liked the attention to detail and the color of the PRB paintings. Ruskin’s praise helped catapult the young artists to a new level.

The dissolution of the PRB

The Brotherhood, however, was slowly dissolving. Woolner emigrated to Australia in 1852. Hunt decided in January 1854 to visit the Holy Land in order to better paint religious pictures. And, in an event Rossetti described as the formal end of the PRB, Millais was elected as an Associate of the Royal Academy in 1853, joining the art establishment he had fought hard to change. 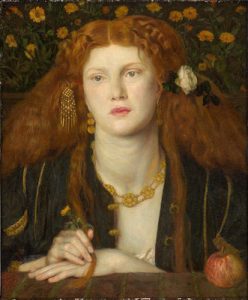 Despite the fact that the Brotherhood lasted only a few short years, its impact was immense. Millais and Hunt both went on to establish important places for themselves in the Victorian art world. Millais was to go on to become an extremely popular artist, selling his art works for vast sums of money, and ultimately being elected as the President of the Royal Academy. Hunt, who perhaps stayed most true to the Pre-Raphaelite aesthetic, became a well-known artist and wrote many articles and books on the formation of the Brotherhood.

Rossetti became a mentor to a group of younger artists including Edward Burne-Jones and William Morris, founder of the Arts and Crafts Movement. Rossetti’s paintings of beautiful women also helped inaugurate the new Aesthetic Movement, or the taste for Art for Art’s Sake, in the later Victorian era. 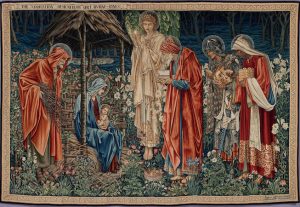 To a contemporary audience, the Pre-Raphaelites may appear less than modern. However, in their own time the Pre-Raphaelite Brotherhood accomplished something revolutionary. They were one of the first groups to value painting out-of-doors for its “truth to nature,” and their concept of banding together to take on the art establishment helped to pave the way for later groups. The distinctive elements of their paintings, such as the extreme attention to detail, the brilliant colors and the beautiful rendition of literary subjects set them apart from other Victorian painters.