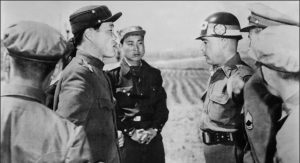 The two Korean states both claim to be the legitimate government of the divided Korean Peninsula.

The two Korean states, which both claim to be the legitimate government of a divided Korean Peninsula, are in the news again. North Korea is testing missiles that could potentially carry nuclear warheads. South Korea is getting a new anti-missile system from the U.S. It is the latest in a long and tormented relationship between the neighboring states.

The Koreas were split at the end of WWII. That was when the Japanese, who annexed the peninsula in 1910, were replaced by occupying forces from the Soviet Union in the north and the United States in the south. The partition line at the 38th parallel would eventually mark the border of what have become vastly different countries. 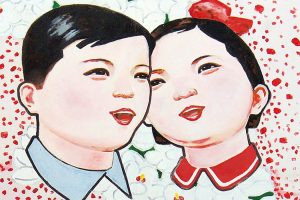 A mural at the Demilitarized Zone / Wikimedia Commons

The war of 1950-53, which involved more than a dozen countries under the aegis of the U.N. aiding the South, and China and the U.S.S.R. aiding the North, ended in an armistice that never evolved into an actual peace treaty. Since then tensions have simmered along the DMZ (demilitarized zone). The U.S., which provided the bulk of the U.N. force during the war, continues to station some 28,500 military personal in South Korea.

American involvement goes back further than WWII. For many Koreans, the Taft-Katsura memorandum of 1905 remains a contentious piece of their history and the U.S.’s role in it. Kirk W. Larsen and Joseph Seeley examine how popular depictions of this “secret treaty” reinforce North Korean suspicion of the U.S. and South Korean disappointment with the U.S.

The memorandum itself documented a conversation between U.S. Secretary of State William Howard Taft and Japanese Prime Minister Katsura Taro. It has been interpreted in the Koreas as an agreement about spheres of influence, with Japanese getting control of Korea and the U.S. control over of Philippines. Few historians in the U.S. or South Korea subscribe to this reading, but, as the authors note, popular memory and perception “prefers clean, simple narratives that ostensibly speak to deeper truths” to the research and writing of scholars.

Another area of great debate is how the North, the Democratic People’s Republic of Korea, actually came about. North Korea, where independent scholarship is not allowed, presents it all as guided by Kim Il Sung, the “Great Leader” (and grandfather of current leader Kim Jong-un). In South Korea and the U.S., the North was seen as a puppet state of the Soviet Union. Gwang-Oon Kim argues that it was a combination of, and contest between, both native and foreign influences.

The DPRK broke with the Soviet Union in the mid-1950s. Since then, the country’s juche(self-reliance) ideology, essentially born in the cauldron of Japanese and then Soviet interference, has been one of hermetic self-sufficiency. This is why, Kim thinks, the isolated North Korean state handily survived the breakup of the U.S.S.R and the Warsaw Pact, as well as China’s turn towards state-sponsored capitalism, and in fact, why it still exists today.

Originally published by JSTOR under an open-access license.