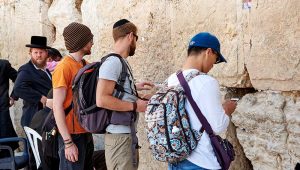 Young Jews praying at the Kotel, the Western Wall, in Jerusalem (Image © Bigstock/kirill4mula)

Messianic Jews consider themselves Jewish Christians. Specifically they believe, as do all Christians, that Jesus is the son of God, as well as the Messiah, and that he died in atonement for the sins of mankind.

There are approximately 175,000 to 250,000 messianic Jews in the U.S, and 350,000 worldwide. About 10,000 to 20,000 live in Israel. According to Dan Juster, a theologian who founded a major messianic Jewish congregation, there are currently about 300 congregations in the United States, and about half of the attendants are Gentiles, or ethnically non-Jewish.

And most of these groups consider the conversion of ethnic Jews specifically – that is, people with at least one Jewish parent – to messianic Judaism a central part of their mission.

Belief in a Messiah who will redeem the Jewish people and thereby usher in a new, more humane era is very much a Jewish concept. However, there are deep theological differences between Jews and Christians regarding exactly who is a Messiah, what a Messiah should do and even how central a Messiah should be to their traditions.

According to both the Hebrew Bible and Jewish oral tradition, a Messiah is a king, a warrior, a political figure or a revolutionary whose mission is divine and specific to the Jews. But the leader is neither divine nor a savior concerned with the afterlife of humanity. Neither is a Messiah worshiped as a deity. 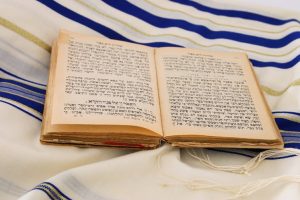 According to the Hebrew Bible and Jewish oral tradition, a Messiah could be a king, a warrior, a political figure or a revolutionary. tomertu/Shutterstock.com

This leader’s job is to facilitate the return of the Jews to the land of Israel, not in the afterlife but in the temporal world. Therefore, redemption does not entail atonement for sins, but is a liberation from exile and a return to self-rule in Israel.

One doesn’t need to be Jewish to be a Messiah. The Persian King Cyrus is referred to as a “Messiah” in the Hebrew Bible because he allowed the Jews to return to the land of Israel, signaling the end of what is known as the Babylonian Exile in the sixth century B.C.

And Cyrus is not the only figure to be called a Messiah. Bar Kohkbah, the warrior and revolutionary who led the Jewish revolt against Rome from A.D. 132 to 135, was also believed to be a possible Messiah because he sought to eject Roman rule from Israel and return the Jews to Jerusalem. The fact that Bar Kohkbah did not successfully defeat Rome ultimately meant he did not turn out to be a Messiah – but he certainly took on the job of a Jewish Messiah.

There are multiple forms of Jewish messianism, but none of them believe that a messianic figure – if such a person exists – will be divine.

Contemporary Judaism’s many branches do not agree on when or if a Messiah will appear at all, especially since the creation of the Israeli state in 1948. This is in large part because the traditional job of a Messiah – the restoration of the Jewish state – has already been accomplished. Some Jews do believe that a Messiah will come, but the signs that would foretell have not appeared yet.

Also, many Jews have rejected the idea of an individual Messiah in favor of the idea that humans themselves, through acts of social justice or tikkun olam, will mend the world and bring about a “messianic age” wherein life for Jews and in fact humanity improves for the better.

Christianity’s redefinition of the nature and role of a Messiah is its most important point of departure from Judaism, and has accounted for much of the tension between Jews and Christians historically.

Jews do not share the Christian belief that Jesus was divine. This difference in belief is grounded in the Jewish assertion that there is only one God, who can never be human, even though God may reveal himself in multiple ways. Historically, this created an insurmountable theological barrier between Jews and Christians.

Although Jewish Christians have technically been around since the death of Jesus, the more modern form of the movement has its roots in late 19th-century Europe, when anti-Semitic persecution was on the rise in Russia and large numbers of Jews immigrated to the United States.

The sole focus of some missions based in England and the U.S. was the conversion of the Jews to Christianity. One such mission, the London Society for Promoting Christianity Amongst the Jews, writes scholar Patricia A. Power, met in Boston in 1816. Its objective, as she says, “was to encourage Gentiles to take the task of Jewish evangelism seriously.”

Jews for Jesus is an inheritor of this objective. It began, as Power explains, as a small group with dedicated followers and became “a multimillion dollar evangelistic machine that aggressively, and with savvy, marketed Jesus as the Jewish Messiah to an astonished and often hostile Jewish community.”

Jews for Jesus’s controversial founder, Moishe Rosen, who died in 2010, adopted some of the practices of the “Jesus People” movement – a religious movement of the 1960s that sought to return to the original life of early Christians – for the conversion of Jews. While appearing to reject anti-Semitism, he portrayed Judaism as an incomplete tradition practiced by people who misunderstand their own scriptures and needed to be saved through conversion to Christianity.

According to Jews for Judaism, an organization that provides support and education for Jews who have been targeted for conversion, missionaries like Jews for Jesus are often aggressive and manipulative in their pursuit of Jewish conversions to Christianity. 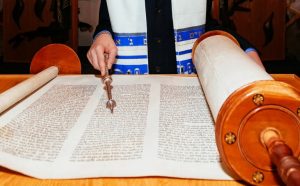 Jews for Judaism alerts Jews to misinformation that might take scriptures out of context. ungvar/Shutterstock.com

On its website, Jews for Judaism alerts Jews to the most common form of misinformation that involves taking the Jewish scriptures out of context – tactics that have been denounced by Jews and Christians alike. Loren Jacobs was defrocked by the Union of Messianic Jewish Congregations for accusations of libel 15 years ago “after becoming involved in a bitter theological debate with other members of the group.”

What makes the targeting of Jews for conversion to Christianity particularly painful and damaging is that for over a thousand years, Jews were persecuted, first at the hands of a Christian Roman Empire and then the Church, because Christians did not believe that Jewish scriptures contained truths claimed by another religion.