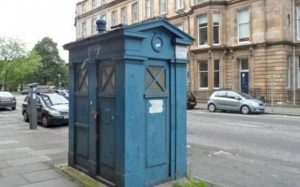 In attempting to stay one step ahead of the criminal, the Police began to exploit the newly invented telephone technology by setting up a pioneering network in Glasgow in the early 1890s, which allowed policemen to stay in touch via signal posts.

The same technologies that allowed the general public to make telephone calls from street kiosks also allowed police officers to keep in touch with their station. 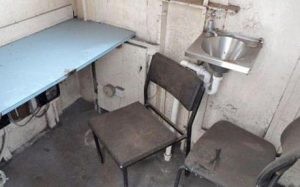 The ‘cosy’ inside of the police box / Photo by Rightmove

The history of the police box really starts in America where the telephone was patented by Alexander Graham Bell in 1876.  His invention  was soon adopted by the police as a communications device. The earliest form of police signal box obviously didn’t employ telephony but used morse code to send the messages. 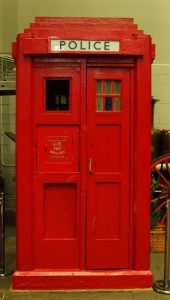 Police box by Thomas Nugent, via Geograph Scottish boxes were red until the 1960’s / Pinterest

Some of the first boxes were eight-sided, pillar like and made from cast iron. These boxes employed a signalling line, which allowed a trigger from the police station to remotely operate an electromagnetic lever system that lit a red lamp on the roof designed to attract the attention of the officer on the beat. Sometimes the lamp was actually located away from the box itself, in a high visibility position to improve the chances of an officer being alerted from further away. 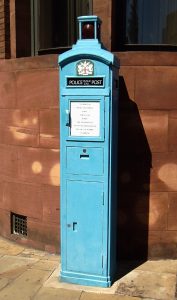 Police boxes and posts were important tools for the Metropolitan Police from the late 1920s until the late 1960s. They allowed officers on the beat and the public to contact the police or make 999 calls in a time before people had access to their own telephones or mobiles.

Although the earliest police boxes in Britain were introduced in Glasgow and large, square boxes with sloping roofs were introduced into the north east by the late 1920s, it was the Metropolitan Police Service boxes, designed by the service’s surveyor Gilbert Mackenzie Trench, in 1929 that caught the public’s imagination and became universally recognisable.

Of course not all police boxes were blue, some were red and a few even green. And they were not all boxes either. Some were long huts and some were made of concrete. 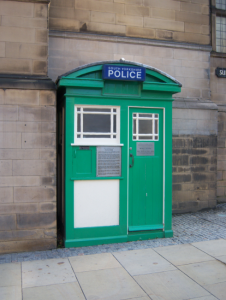 A 1929 police box that stands on Surrey Street, outside Sheffield Town Hall. It is still used as a post for city ambassadors, providing tourist information. / Wikimedia Commons

Chief Constable Frederick James Crawley of Newcastle-upon-Tyne introduced police boxes in Sunderland, starting in April 1923, to increase the efficiency of constables on the beat. He had realised that much of a constable’s time was wasted travelling to and from his police station – for example, a half-hour refreshment break called for a visit to the police station (or any other suitable place), and then a return to beat duty. This meant that up to a quarter of a constable’s beat time could be wasted. The police box system was therefore introduced as a means of decentralising the police force. Placing police boxes on the street effectively provided each constable with a mini police station, and it was later found that beat constables did not actually have to make any physical contact with a police station proper. One consequence of this was that some police stations were closed, thereby providing a cost saving.

In many cities, a PC didn’t have to report for duty in a station, but could go straight to the box and ‘ring in’ to his control centre at regular intervals. This saved time at the cost of making the constable’s life far more isolated. In nearly all boxes the telephone could also be operated by the public through a cubby-hole door, and would connect them with the police switchboard. 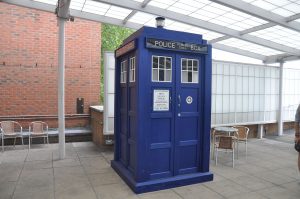 From a social perspective, the introduction of these little police outposts saw an important change in their function. The main difference between the old signal posts and the new boxes was that they could be used by the public. There was no lock on the telephone panel and and the new loudspeaker-telephone system (what we’d refer to simply as a ‘speakerphone’), something which was unfamiliar to the public, had an explanatory notice. Due to their modernity, the public were very cautious about making use of these telephonic systems and despite their great number in London, in 1933 a Police Box was used by the public on average less than once per month. This situation led to special exhibits being set up to educate the public and encourage them to use the boxes, and statistics in Glasgow report that total calls nearly doubled between 1935 and 1936. By the 1940s, the Police Box had an extremely important position in society, since most homes did not have telephones and the boxes could be used to report fire, or to summon an ambulance as well as their primary purpose of combatting crime. – themindrobber.co.uk 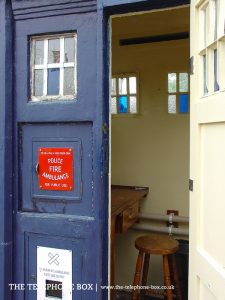 Police boxes continued to play an important role in police work until the late 1960s to early 1970s, when they were phased out following the introduction of personal radios. With the growth of portable telecommunications devices and the near universal access by the public to telephones, there was little or no need for the little blue box.

In 1969, it was decided to start decommissioning the boxes with the majority being removed, or simply ignominiously demolished where they stood.