The Mongol Empire expanded through brutal raids and invasions, but also established routes of trade and technology between East and West.

Rise of the Mongol Empire

The Mongol Empire: Expansion of the Mongol empire from 1206 CE-1294 CE

During Europe’s High Middle Ages the Mongol Empire, the largest contiguous land empire in history, began to emerge. The Mongol Empire began in the Central Asian steppes and lasted throughout the 13th and 14th centuries. At its greatest extent it included all of modern-day Mongolia, China, parts of Burma, Romania, Pakistan, Siberia, Ukraine, Belarus, Cilicia, Anatolia, Georgia, Armenia, Persia, Iraq, Central Asia, and much or all of Russia. Many additional countries became tributary states of the Mongol Empire.

The empire unified the nomadic Mongol and Turkic tribes of historical Mongolia under the leadership of Genghis Khan, who was proclaimed ruler of all Mongols in 1206. The empire grew rapidly under his rule and then under his descendants, who sent invasions in every direction. The vast transcontinental empire connected the east with the west with an enforced Pax Mongolica, or Mongol Peace, allowing trade, technologies, commodities, and ideologies to be disseminated and exchanged across Eurasia.

Mongol invasions and conquests progressed over the next century, until 1300, by which time the vast empire covered much of Asia and Eastern Europe. Historians regard the Mongol raids and invasions as some of the deadliest and most terrifying conflicts in human history. The Mongols spread panic ahead of them and induced population displacement on an unprecedented scale.

Impact of the Pax Mongolica

The Pax Mongolica refers to the relative stabilization of the regions under Mongol control during the height of the empire in the 13th and 14th centuries. The Mongol rulers maintained peace and relative stability in such varied regions because they did not force subjects to adopt religious or cultural traditions. However, they still enforced a legal code known as the Yassa (Great Law), which stopped feudal disagreements at local levels and made outright disobedience a dubious prospect. It also ensured that it was easy to create an army in short time and gave the khans access to the daughters of local leaders. 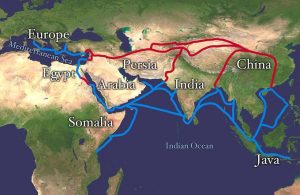 The Silk Road: At its height these trade routes stretched between Europe, Persia, and China. They connected ideas, materials, and people in new and exciting ways that allowed for innovations.

The constant presence of troops across the empire also ensured that people followed Yassa edicts and maintained enough stability for goods and for people to travel long distances along these routes. In this environment the largest empire to ever exist helped one of the most influential trade routes in the world, known as the Silk Road, to flourish. This route allowed commodities such as silk, pepper, cinnamon, precious stones, linen, and leather goods to travel between Europe, the Steppe, India, and China. 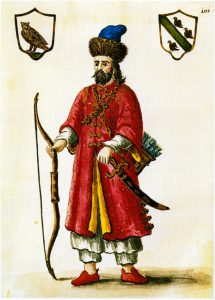 Marco Polo in a Tatar costume: This style of dress, with the fur hat, long coat, and saber, would have been popular in regions in and around Russian, Eurasia, and Turkey.

Ideas also traveled along the trade route, including major discoveries and innovations in mathematics, astronomy, paper-making, and banking systems from various parts of the world. Famous explorers, such as Marco Polo, also enjoyed the freedom and stability the Pax Mongolica provided, and were able to bring back valuable information about the East and the Mongol Empire to Europe.

The Empire Starts to Fragment

However, the Battle of Ain Jalut in 1260 was a turning point. It was the first time a Mongol advance had ever been beaten back in direct combat on the battlefield, and it marked the beginning of the fragmentation of the empire due to wars over succession. The grandchildren of Genghis Khan disputed whether the royal line should follow from his son and initial heir Ögedei or one of his other sons. After long rivalries and civil war, Kublai Khan took power in 1271 when he established the Yuan Dynasty, but civil war ensued again as he sought unsuccessfully to regain control of the followers of Genghis Khan’s other descendants.

By the time of Kublai’s death in 1294, the Mongol Empire had fractured into four separate empires, or khanates. This weakness allowed the Han Chinese Ming Dynasty to take control in 1368, while Russian princes also slowly developed independence over the 14th and 15th centuries, and the Mongol Empire finally dissolved.