Between the paws of the six-story Great Sphinx in Giza, a slab of hieroglyphs tells the story of how King Thutmose IV dreamed his destiny.

The eight-foot Dream Stela was erected in 1401 B.C., 1,000 years after the Great Sphinx. Age has left the bottom third of the text unreadable.

Under the leadership of Harvard Semitic Museum curator Adam Aja, students created a reproduction of the monument, following a cast that dates to the 1840s. The work is now on display on the museum’s second floor. As an accompaniment, visitors can access an augmented-reality app that sheds light on the Sphinx throughout history.

Extension School student Caitlin Stone was one of 12 students who spent hours last fall poring over two molds Aja brought back from KU Leuven, a university in Brussels, which owns one of a group of mid-19th-century replicas.

“I just love casting,” said Stone, who is working on a master’s in museum studies. “It’s what got me interested in working with Adam. And the added element of the app is amazing in action.”

Aja concocted a blue urethane resin for his team to use in the project. The process demanded intense focus. Students from the College, the Graduate School of Arts and Sciences, and the Division of Continuing Education had between seven and 10 minutes to “paint” the poured resin into the molds’ tiny crevices.

Aja reminded students to “even out.”

“We don’t want clear brushstrokes,” he said. “Curing time is 10 minutes from mixing time to application. After that, the veneer will layer thicker.” 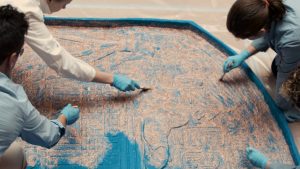 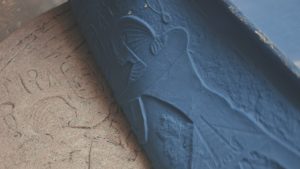 Students work quickly to paint resin into molds made from a cast of the ancient Egyptian monument. 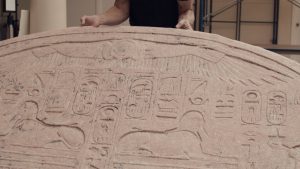 Idabelle Paterson, a gap-year student who will start at Harvard in the fall, worked on the project as part of a three-month internship with the museum.

“It’s a great opportunity to learn how the cast process works and it’s an interesting glimpse into what museum life is like. The fact that we are able to re-create what the stela really looks like is incredible. It’s an invaluable experience.”

Peter Der Manuelian, Philip J. King Professor of Egyptology and director of the museum, said that the sunk relief was a first for the exhibit spaces.

“We don’t have anything like this,” he said. “It grew out of Adam’s expertise in developing Mesopotamian resin relief casts. His thinking as both archaeologist and museum curator gave it the right balance. It has to catch the light to really show how impressive it was intended to look.”

The reproduction was installed in March. More than 300 students from Der Manuelian’s course “Pyramid Schemes: The Archaeological History of Ancient Egypt” tested the augmented reality app, which displays an overlay of clear hieroglyphs on the slab as well as translations of several sections.

“The Dream Stela and the augmented reality made me feel like I was actually traveling back thousands of years,” said Mallikarjun. “The fact that I could move the phone and see different parts of Giza made me feel present at the site. The augmented reality also provided a translation of the entire stela, which was really cool since normally I would have very little clue as to what it says. It was a great learning experience and makes the younger generation more interested in archaeology and ancient civilizations.”