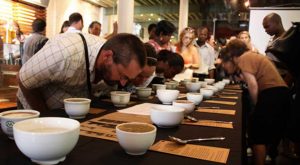 Cupping takes place at many steps along the journey from crop to cup, in both the producing and consuming countries. To standardise the findings from these cupping sessions the following terms are used to describe the characteristics of the coffee.

However you do not have to be a professional coffee taster to try and identify the various flavours that are in your own home brewed coffee. Scroll through the glossary below and see what you find to help you describe your coffee like a coffee expert… 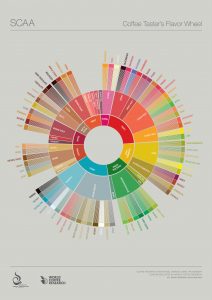 Acidity, used as a coffee term, refers to bright, tangy, fruity, or wine-like flavor characteristics found in many high grown Arabica coffees. Coffee with high acidity is described as acidy, which has nothing to do with amount of acid, or pH. Coffee actually has a relatively neutral pH of between 5 and 6. When green coffee is stored for more than a year it will have a perceptible loss of flavor and acidity. Acidity is reduced as coffee is roasted darker

A harsh sour taste. An acrid coffee can be described as tart, sharp, or acerbic.

The taste term “alkaline” describes a dry taste sensation mostly at the back of the tongue. While somewhat bitter, an alkaline taste is not necessarily disagreeable and is characteristic of many dark roasts.

Coffee aroma is the fragrance of brewed coffee and is closely related to coffee flavour.  Without our sense of smell, flavour w0uld be limited to the tongue senses of sweet, sour, salty and bitter.  May nuances of coffee are reflected in the small, or the “the nose”.

Typical coffee aromas include floral, winey, chocolaty, spicy, tobacco-like, earthy, and fruity and are  also experienced after drinking the coffee when vapours drift upward into the nasal passage.   This “retro nasal” aroma is responsible for much of a coffees aftertaste.

Coffee odour similar to that of an ashtray or fireplace. An “Ashy” aroma indicates a dark roast, and is not necessarily a negative attribute. Ashy coffees generally have a carbon like flavour.

Drawing coffee brew into the mouth by vigorous suction to spray it evenly across the tongue releasing vapours. Aspiration helps cuppers (tasters) attain a better sensory evaluation of a coffees nuances.

A dry, sour, salty, and generally disagreeable sensation detected mostly at the sides of the tongue.

Flat, dull, and uninteresting coffee. A baked flavour may be caused by roasting too slowly and for too long.

A balanced coffee may be complex, but does not have any overwhelming flavour or aroma characteristics.. A well balanced coffee has flavours that can be sensed evenly across the tongue. Blending several different coffees together, if done correctly, can create a flavourful and balanced coffee. Balance, however, is personal, since some people prefer coffees with particularly strong flavour distinction or profile.

A harsh, generally unpleasant taste detected mostly in the back of the tongue. Bitterness is characteristic of over-extracted, defective, burnt or extra dark roasted coffees.

The physical mouth feel and texture of a coffee. Full bodied coffees have a strong, creamy, and pleasant, mouth feel. A coffees body (light, medium, or full) is its thickness due to the amount of dissolved and suspended solids and oils extracted from the coffee grounds, and may range from thin and watery to thick and creamy.

The aroma of freshly ground coffee.

A bread-like, or grain-like, aroma. Insufficiently roasted, sour tasting, coffee will often have a bready aroma. Bready coffees may also be described as “green” or “bean- like”.

Coffees with a pleasant, almost tangy, flavour. Bright coffees may also be described as having a wine like acidity.

A salty taste often caused by continuously heating coffee after brewing is complete. Brewed coffee that sits on a burner overnight is likely to taste briny.

A flavour and aroma characteristic of candy or syrup in which sugars have oxidised and become caramelised. Coffee beans contain sugars which caramelised during roasting and, if not burned, may be detected as caramels notes in the cup.

The flavor and aroma characteristic of burnt food, or burnt wood. Carbon flavours and aromas are often used as an indication of roast degree when cupping or tasting darker roasted coffees. Also called “burnt” or “smokey”.

An herb used as a coffee substitute and to flavor coffee. One such example is Chicory, or which has been used as a coffee additive for centuries, both to enhance flavour of coffee and to stretch coffee supplies.

The taste or aroma of chocolate. Coffees rarely have a very strong chocolaty flavour or aroma, but some Central American and Yemeni coffees have a distinct chocolaty aroma and a slightly bitter-sweet chocolaty taste.

The aroma and taste of ripe citrus fruit. Citrus notes are often found in coffee, which is not surprising considering the fact that coffee beans are the seeds of coffee cherries. Coffees with flavour characteristics of unripe citrus are described as “sour”.

Flavourful, but without any pungent or unusual flavours.

The array of flavours and flavour shifts experienced when smelling and tasting a coffee.  While not necessarily a positive attribute, complexity can sometimes be gained by blending one coffee with another or by blending a dark with a light roast.

The layer of saturated coffee grounds that floats to the surface when cupping (tasting) coffee. As part of the traditional coffee cupping method, called “breaking the crust”, the grounds are agitated to release trapped vapors allowing the cupper note the coffees unique characteristics. The crust is then scooped out with a spoon before tasting the brewed coffee.

The aroma characteristic of fresh earth, wet soil, or raw potatoes. While not necessarily negative characteristic, earthiness may be caused by molds during the processing of harvested coffee cherries.

A sour and oniony taste characteristic of over-fermented coffee. After de-pulping coffee cherries, which removes the skin and some attached mucilage (pulp), the separated beans will still have a significant amount of pulp attached. The remaining pulp is often loosened by fermentation, allowing it to be washed away prior to drying. If fermentation is not stopped as soon as the remaining parchment (husk) is no longer slimy, and has a rough texture, the coffee may acquire a ferment flavour.

The scent of flowers including honeysuckle, jasmine, dandelion and nettles. Mildly floral aromas are found in some coffees and are generally perceived along with fruity or herbal notes.

The aroma and taste of fruit. Many coffees have fruity notes, which is not surprising considering that coffee beans are seeds of a fruit (coffee cherries). A coffees acidity, or wine-like brightness, is often related to fruit, or citrus. Professional cuppers are careful to not use the term “fruity” when describing the aroma of unripe, or over-ripe, fruit.

Pungent and disagreeable, such as a low quality bitter Robusta.

The smell or taste of hide (leather). Hidey notes, for example, may be found in some east African coffees.

The aroma of malt. Often used together with Cereal and Toast-like to include the aroma of cereal, malt, and toast. “Cereal”, “Malty”, and “Toast-like” describe grain-like aromas and flavours of roasted grain (including roasted corn, barley, or wheat), malt extract, freshly baked bread, or toast.

The smell of medicine, or iodine. A medicinal flavour with notes of iodine which can result from cherries drying while still on the coffee plant. Medicinal flavours cannot be hidden well by blending.

Balanced and mild, without strong tastes or aftertaste. Medium roasted, low grown (less than 4000 feet) Arabica, for example, generally have a mellow flavor.

Neutral coffees do not have a predominant taste sensation, but may still have a pungency felt by the tongue and are often used in blending. Coffees from Brazil and Colombia, for example, commonly have a neutral flavour and good as the base ingredient for a blend .

The aroma and taste characteristic of a coffee sensed by the nose, especially when exhaling coffee vapors after swallowing.

The aroma and flavour characteristic of fresh nuts. Coffee cuppers are careful to avoid using the term “nutty” when describing coffee with taste or aroma characteristics of rancid nuts or bitter almonds. Coffees from South America commonly have a nutty flavor.

Flavour characteristic of onions, and often associated with the use of stagnant water when processing coffee by the wet method. Oniony characteristics are often avoided by recycling the pulping water during processing.

Coffee from a previous year’s harvest. Past crop, old crop, or old are also used as a taste terms to describe coffees stored for more than a year. Past crop coffees tend to have a woody, straw-like, or hay-like flavour and less acidity.

Can be an unpleasant bitter taste similar to fresh green peas.

Professional coffee cuppers may describe flavors detected by the tongue (primary tastes), and flavors detected through the nose (secondary tastes). Primary tastes are salty, sweet, sour, and bitter. Taste buds are located on our tongues, and while many subtle tastes can be recognised, there are only four distinct tastes (salty, sweet, sour, and bitter). Each taste bud contains between 50 and 100 taste cells, and each taste cell has receptors. While receptors are capable of recognizing all tastes, some tend to recognize sour foods and are usually located around the sides of the tongue. Sweet and salty foods are usually tasted best near the end of the tongue. Bitter foods are usually tasted at the back of the tongue. The middle of the tongue usually has no taste buds.

A peanut-like flavor that results from processing unripe or underdeveloped coffee beans.

The terms “rancid” and “rotten” are used to describe characteristics of decomposing coffee. Professional coffee cuppers are careful to not describe a strong and unpleasant aroma as “rancid”, if there are no other signs of deterioration.

The aroma and flavor characteristic of hot tires or rubber bands. A rubbery characteristic, while not always negative, is highly recognizable in some coffees, especially fresh Robusta.

Roasted coffee with burn marks caused by inadequate tumbling or by roasting too hot. Also called “tipped” or “charred”. Scorched beans may look completely roasted, but are likely to have sour and bready flavors.

A taste characteristic of balanced coffee without any pronounced tastes or aftertastes. Also called round, rounded or soft.

An excessively sharp, biting and unpleasant flavor (such as vinegar or acetic acid). Sour or sour flavors are sometimes associated with the aroma of fermented coffee. A sour taste can be caused by overripe or already fermenting cherries, or by improper fermentation where yeasts and alcohol form vinegar-like acids To avoid this defect, coffee still in its parchment (husk) is washed immediately after fermentation when the parchment coffee is no longer slimy and has a rough texture. Sourly flavors are often confused with acidity, which is the slightly tangy sensation associated with bright coffee flavors.

An unexpected off-flavor not clearly defined by usual taste categories. Too much pulp in fermenting parchment, for example, will produce tainted coffee.

The aroma and flavor of fresh tobacco in brewed coffee. A tobacco-like taste is not necessarily disagreeable and is found in various specialty coffees throughout the world. A tobacco taste or aroma should not be confused with characteristics of burnt tobacco (ash).

The combined sensation of smell, taste ,and mouth feel experienced when drinking wine. A winey taste is generally perceived along with acidy and fruity notes. Often used incorrectly to describe a sour or over-fermented flavor.

A taste characteristic of old coffee. Woody coffee has a smell of dry wood, an oak barrel, dead wood, or cardboard. This defect results when beans are improperly stored for an extended period of time. Coffees stored at low altitudes in high temperatures and humidity (as in many ports of shipment) tend to deteriorate quickly and become woody. All coffees can become woody if stored long enough.