It seems as though no other substance occupies so much of the world’s land, for so little benefit to humanity, as sugar. According to the latest data, sugarcane is the world’s third most valuable crop after cereals and rice, and occupies 26,942,686 hectares of land across the globe. Its main output – apart from commercial profits – is a global public health crisis, which has been centuries in the making.

The obesity epidemic – along with related diseases including cancer, dementia, heart disease and diabetes – has spread across every nation where sugar-based carbohydrates have come to dominate to the food economy.

So at this time, it pays to step back and consider the ancient origins of sugar, to understand how it has grown to present an imminent threat to our landscapes, our societies and our health.

Human physiology evolved on a diet containing very little sugar and virtually no refined carbohydrate. In fact, sugar probably entered into our diets by accident. It is likely that sugarcane was primarily a “fodder” crop, used to fatten pigs, though humans may have chewed on the stalks from time to time. 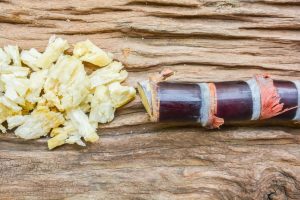 Evidence from plant remnants and DNA suggests that sugarcane evolved in South East Asia. Researchers are currently hunting for early evidence of sugarcane cultivation at the Kuk Swamp in Papua New Guinea, where the domestication of related crops such as taro and banana dates back to approximately 8,000BC. The crop spread around the Eastern Pacific and Indian Oceans around 3,500 years ago, carried by Austronesian and Polynesian seafarers.

The first chemically refined sugar appeared on the scene in India about 2,500 years ago. From there, the technique spread east towards China, and west towards Persia and the early Islamic worlds, eventually reaching the Mediterranean in the 13th century. Cyprus and Sicily became important centres for sugar production. Throughout the Middle Ages, it was considered a rare and expensive spice, rather than an everyday condiment.

The first place to cultivate sugarcane explicitly for large-scale refinement and trade was the Atlantic island of Madeira, during the late 15th century. Then, it was the Portuguese who realised that new and favourable conditions for sugar plantations existed in Brazil, where a slave-based plantation economy was established. When Brazilian sugarcane was introduced in the Caribbean, shortly before 1647, it led to the growth of the industry which came to feed the sugar craze of Western Europe.

This food – which nobody needed, but everyone craved – drove the formation of the modern of the world. There was a huge demand for labour to cultivate the massive sugar plantations in Brazil and the Caribbean. This need was met by a transatlantic slave trade, which resulted in around 12,570,000 human beings being shipped from Africa to the Americas between 1501 and 1867. Mortality rates could reach as high as up to 25% on each voyage, and between 1m and 2m dead must have been thrown overboard.

And of course, goods such as copper and brass, rum, cloth, tobacco and guns were needed to purchase slaves from the African elites. These were secured through the expansion of industrial production, particularly in the English Midlands and South West. Modern-day banking and insurance can trace its origins to the 18th century Atlantic economy. 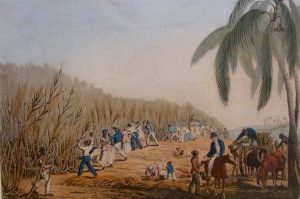 Meanwhile, the slaves working the plantations suffered miserable lives. When they were finally emancipated in 1834 in the British Empire, it was the slave owners who were fully compensated – not the slaves. Much of this money was used to build Victorian infrastructure, such as railways and factories.

In many ways, the story of sugar and tobacco are closely aligned. Both products were initially produced through slave labour, and were originally seen to be beneficial to health. And although both sugar and tobacco have ancient origins, it was their sudden, mass consumption from the mid-17th century onwards that created the health risks we associate with them today.

The idea of “industrial epidemics” of non-communicable diseases, being driven by the profit motives of major corporations, rings true for both. And while tobacco is widely acknowledged to be addictive, sugar can also drive behavioural responses that are indistinguishable from addiction.

But in the 21st century, the grip of sugar is stronger than comparable scourges like tobacco, or even alcohol. Sugar is not only ubiquitous – it is potentially responsible for approximately 20% of the caloric content of modern diets – but also central to the world’s economy and cultural heritage. 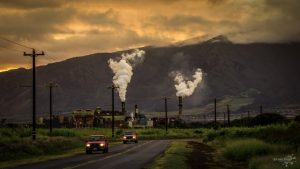 Perhaps a better comparison is our reliance on fossil fuels. Fossil fuels are not just a vice or bad habit, but central to the way we live, and to the geography and politics of the territories where it is sourced. Likewise, the rise of sugar has been key to global trade and socioeconomic development, slavery and the African Diaspora and modern cultural norms.

The evolutionary and historical origins of sugarcane may hold insights into why sugar dominates modern culture, and what we can do to mitigate its malign influence. Like many great challenges of the 21st century, such as climate change, the science identifying the problem seems clear.

What’s lacking is the public and political will to address it, in ways such as the proposed sugar tax and prominently displayed health warnings. With sugar still deeply part of our food system – in 2013, sugar crops made up 6.2% of world’s agricultural yield and 9.4% of its total monetary value – such bold socio-economic measures are needed to make the necessary changes possible.