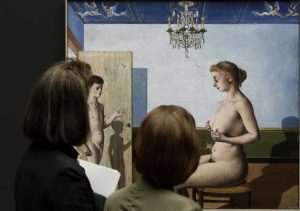 Visitors look at the painting The Visit from 1939 by Paul Delvaux during the 2011 exhibition Surrealism in Paris. REUTERS/Arnd Wiegmann 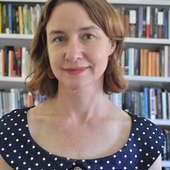 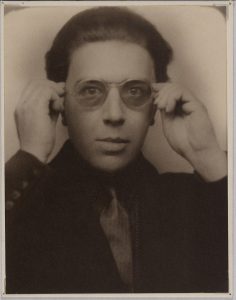 The movement officially began in 1924 with the publication of the first Manifesto of Surrealism, penned by poet and writer André Breton, who became the movement’s titular leader until his death in 1966.

Influenced by Sigmund Freud’s theory of the unconscious, the manifesto defined Surrealism as “psychic automatism”, a process that encouraged a freeing of the mind from rational and utilitarian values and constraints as well as moral and aesthetic judgement.

Throughout the 1930s Surrealism became an incredibly diverse international movement, and included the dissident Surrealist faction grouped around George Bataille.

Revolution of the mind

Breton conceived of Surrealism as a revolution of the mind that would fundamentally transform everyday experience. Surrealism was less interested in the irrational for its own sake, than in reconciling the contradictory states of dream and reality into a more potent form of reality – a kind of surrealist consciousness.

The emergence of psychoanalysis and Freud’s theories of the mind offered Surrealism a way to move beyond an empirical, surface apprehension of the world. While Freud was interested in how everyday life informs dreams, the Surrealists experimented with the ways in which our dream world informs everyday experience, including creative practice.

The Surrealists’ exploration of dreams, sexuality and desire through involuntary actions and processes, such as spontaneous or automatic writing and drawing, redirected the significance of the unconscious away from its traditional therapeutic function. 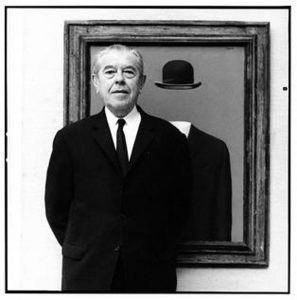 Portrait of René Magritte in front of his painting The Pilgrim, taken by Lothar Wolleh in 1967. Wikimedia Commons

Ernst also experimented with techniques such as frottage (a form of rubbing) and decalcomania (transferring paint from one surface to another) to reveal hidden textures and forms in fantastic landscapes that impart a primordial vision of the natural world.

Surrealist objects such as Dalí’s Lobster Telephone (1936) and Meret Oppenheim’s Object (1936), a fur-covered tea-cup and spoon, worked to de-familiarise everyday experience, emphasising desire and fetishism as an intrinsic part of our relationship with ordinary objects.

Invariably playful and disturbing at the same time, the Surrealist object insists on the rich poetic and emotional resonances that inform our relationship to the everyday material world. 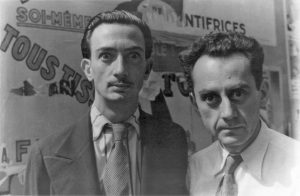 Essayist and cultural analyst Susan Sontag showed that surrealism excelled in the domain of photography through its creation of a second-degree reality that accentuated the drama and visceral undercurrent of the world perceived through natural vision.

Man Ray’s photographs exemplify the Surrealist’s reconciliation of art and life, dream and reality. Through the incorporation of shadows, distortions and reflections they reveal a new awareness of the everyday visual world.

Working across avant-garde and commercial domains, Man Ray incorporated experimental techniques such as solarisation, montage and collage, instilling a palpable sense of drama and desire into his iconic portraits and fashion photography.

Other Surrealist photographers such as Claude Cahun explored the metamorphosis of the self through a series of startling self-portraits that capture the fluid boundaries of gendered and sexual identity.

Immersed in the errant logic of dreaming, Luis Bunuel and Salvador Dali’s 1929 film Un Chien Andalou  (An Andalusian Dog) encapsulated the inherently surreal possibilities of cinema – a legacy that was taken up in Alfred Hitchcock’s psychological thriller Spellbound (1945) and in the cinema of David Lynch and David Cronenberg.

Rejecting a conventional narrative plot in favour of a series of disjointed scenes and images that visually capture the Freudian process of free-association, Un Chien Andalou explores the power of montage (the editing together of film shots to create a condensed sequence) to create shocking and emotionally disturbing cinematic images.

Surrealism’s legacy is indisputable, informing all manner of cultural forms from film, photography, fashion and advertising culture to literature and philosophy. Lurid Beauty: Australian Surrealism and its Echoes – recently on show at the Ian Potter Centre, NGV Australia – documented the influence of the movement on Australian artists from the 1930s to the present day.

In literature, Surrealism influenced the Beat Generation writers, most notably William S Burroughs, as well as the Latin American school of Magical Realism, postmodern writers such as Thomas Pynchon and Paul Auster, and the poet and singer-songwriter Patti Smith. 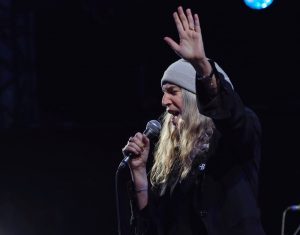 Surrealism’s disruption of the hierarchical relationship between high and popular culture and emphasis on the transformation of everyday life within the urban locale, has left an important imprint on the newer academic fields of everyday life studies, urban theory, and cultural studies.

According to Michel Foucault, Surrealism not only completely transformed literary and artistic culture: through its devaluation of the rational and in its tireless belief in the transformative possibilities of the imagination, it made possible a new kind of intellectual thought.