A science fiction novel by the incredibly wealthy businessman and member of the prominent Astor family, John Jacob Astor IV, in which he offers an imagining of life in the year 2000. Astor, an amateur inventor himself (patents included a bicycle brake and turbine engine) makes a number of speculations about future technologies (some more accurate than others), including descriptions of a worldwide telephone network, solar power, air travel, space travel to the planets Saturn and Jupiter, and terraforming engineering projects — damming the Arctic Ocean, and adjusting the Earth’s axial tilt (by the Terrestrial Axis Straightening Company).

The ability to travel through space is made possible by “apergy”, an anti-gravitational energy force first described by Percy Greg in his 1880 novel Across the Zodiac – (In 1895, Astor would make a substantial investment in the company of John Keeley who claimed to have invented an “etheric” power similar in many ways to “apergy”). Astor describes Jupiter as a jungle world teeming with flesh-eating plants, blood-sucking bats, giant snakes and flying lizards. It’s also rich in resources – iron, silver, gold, lead, copper, coal, and oil – which the Americans (now a multi-continent superpower) are quick to exploit. In contrast to Jupiter’s visceral environment of dangerous creatures and money-making minerals, Saturn is an ancient world of silent spirits which provide Astor’s explorers with foresight into their own deaths.

Astor himself was to meet an untimely end, being one of the 1,514 people who perished in the sinking of the RMS Titanic on April 15th 1912. The richest passenger aboard the doomed vessel, he was thought to be among the richest people in the world at the time, with a net worth of $85,000,000 when he died. Astor’s prominence led to the creation of many exaggerated and unsubstantiated accounts about his actions during the sinking of the Titanic, one of the most famous being that, as the ship hit he iceberg, he quipped, “I asked for ice, but this is ridiculous.” One of his major legacies was the Walforf Astoria hotel in New York, formed when his Astoria hotel was merged with the adjacent Waldorf owned by his cousin in 1897. The hotel coincidentally became the host location for the U.S. inquiries into the sinking of the Titanic. 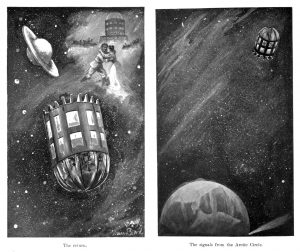