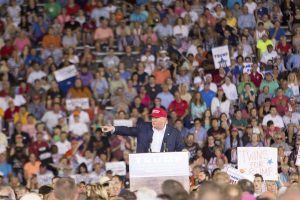 In a previous essay I highlighted some of the similarities between Trump voters in the 2016 presidential election and German voters who made the Nazi Party the largest in the German Reichstag in 1932. But when Hitler became German chancellor in January 1933, he still had many constraints upon him. Nevertheless, he quickly freed himself from them, en route to becoming the dictator he was, one who led the Germans into a devastating war and perpetrated such horrors as the Holocaust.

As the inauguration of Donald Trump approaches, many who voted against him are asking themselves how to prevent him from leading the United States down paths that might also be harmful, how to prevent him from subverting the common good. Hitler’s dealings with others and his consolidation of power from 1933 forward can teach us much about the dangers awaiting us during a Trump presidency.

But before we examine these lessons, a word of caution: Trump is no Nazi or fascist, and history never exactly repeats itself. Our president-elect has some resemblances to Hitler and Mussolini, and the conditions that elevated him to power have some parallels to theirs, but he is a unique phenomenon. As the political philosopher Isaiah Berlin once wrote, “What matters is to understand a particular situation in its full uniqueness, the particular men and events and dangers, the particular hopes and fears which are actively at work in a particular place at a particular time.”

To take just one example of differences, in the 1920s and 1930s fear of communism helped the rise of both Mussolini and Hitler. Today, fears of illegal immigrants, terrorism, and globalization are more significant in aiding the appeal of Trumpism and similar movements in Europe.

Keeping these caveats in mind, let’s look at some of the lessons we can learn from the Hitler experience, including his consolidation of power.

A central mistake made by many dealing with Hitler, both before and after he became chancellor, was to underestimate him. In 1930 a magazine editor described him as a “half-insane rascal,” a “pathetic dunderhead,” a “nowhere fool,” and a “big mouth.” Certainly, when Trump first announced he was running for the presidency, many thought he had no chance. All the way through the Republican primaries and then into his campaign against Hillary Clinton, he was underestimated. I, myself, wrote an article entitled “The Main Problem with Donald Trump: He’s a Fool.”  (Calling him such, however, was not an underestimation of him or a denial of his “considerable talents . . . intelligence, or ‘street-smarts,’” but rather a comment on his lack of wisdom.)

Liberals and intellectuals who have underrated Trump’s political skills have often done so for the same reason Hitler was often dismissed by cultured people. As Lionel Trilling indicated in his Liberal Imagination (1950), liberalism “drifts toward a denial of the emotions and the imagination.” Martha Nussbaum’s Political Emotions: Why Love Matters for Justice, Jonathan Haidt’s The Righteous Mind: Why Good People Are Divided by Politics and Religion, and Rick Shenkman’s Political Animals: How Our Stone Age Brain Gets in the Way of Smart Politics are some recent books that have also indicated that voters often act more on emotions than on any rational considerations.

Shenkman’s earlier book, Just How Stupid Are We?: Facing the Truth About the American Voter, and the fact that Trump did much better among voters without a college degree, may tempt educated liberals to just blame Trump’s election on ignorance. But that would be a simplistic mistake, a failure to employ what Zachary Shore calls “strategic empathy,” which he describes as “the skill of stepping out of our own heads and into the minds of others. It is what allows us to pinpoint what truly drives and constrains the other side. Unlike stereotypes, which lump people into simplistic categories, strategic empathy distinguishes what is unique about individuals and their situation.” Such empathy does not imply agreement or that we should not eventually criticize positions we find faulty or abhorrent. But first we should try to understand them as fully as we can.

In underestimating Hitler, one common belief was that the responsibilities of leading a major nation like Germany would make him more sober and pragmatic, less the ideologue, than he was when in the 1920s he wrote the anti-Semitic, extremely nationalistic Mein Kampf. After meeting with President-elect Trump, President Obama stated “I don’t think he is ideological . . . . he is pragmatic.” Nevertheless, U. S. citizens would be foolish to ignore all the statements Trump made while campaigning. They reveal something important about him, and should not be dismissed or minimized as just meaningless campaign rhetoric. He may not be an ideologue, but more an opportunistic and erratic narcissist who can be just as dangerous.

An important lesson we can learn from Hitler’s consolation of power is that it is possible to dismantle constitutional protections from within a political system itself. After he had blamed a February 1933 fire that destroyed the Reichstag building on the German communists, he convinced President Hindenburg to sign an emergency decree that indefinitely suspended basic liberties and the due process of law. In March 1933 he convinced the Reichstag, where Nazis held 44 percent of the seats, to agree to the Enabling Act, which transferred legislative power to him and his cabinet and allowed him to suspend parts of the Weimar constitution. By the summer of 1933, all political parties except the Nazis were outlawed. After President von Hindenburg died in August 1934, Hitler merged the positions of president and chancellor and began referring to himself as Führer und Reichskanzler (Leader and Chancellor).

But, one may object, our political system is much stronger than the Weimer one and has been around for centuries. Certainly, that is true. But let’s not forget that the Republicans will control not only the Congress and most state governments, but also Supreme Court appointments. The Court will undoubtedly become more conservative, and it and our national amendment process enable us to interpret the Constitution in very different ways and to amend it. Remember, for example, that there was a time when women and most blacks could not vote and abortions were illegal. Also there was a time when Prohibition was the law of the land.

During his campaign Trump said of the children of families living illegally inside the USA, “They have to go,” adding “What they’re doing, they’re having a baby. And then all of a sudden, nobody knows . . . the baby’s here.” One source quoting these words stated that getting rid of these children would require repealing the 14th amendment’s citizenship clause and that would be unlikely since it would require “the votes of two-thirds of both houses of Congress and support from three-fourths of the nation’s state legislatures.”

But at least one important source of Trump support, Breitbart News, does not agree that such birthright citizenship is granted by the 14th amendment. An article on its website argues that “the Constitution’s Fourteenth Amendment does not confer citizenship on the children of foreigners, whether legal or illegal.” (The former executive chairman of Breitbart News is Steve Bannon, former Trump campaign manager and now appointed as Trump’s chief White House strategist and senior counselor. Former Fox conservative commentator Glenn Beck and many others have linked him to white nationalism and hostility toward minorities, including Jews.)

Besides birthright citizenship for illegal immigrants, all sorts of other “rights,” including those connected with free speech (like flag burning), could be changed by new Supreme Court interpretations, new laws, or new amendments or changes to already existing ones.

One more important lesson to learn from Hitler’s Germany is to be wary of the power of nationalism and the likelihood it can lead to the tragedy of war. Hitler’s successes before WWII in making Germany “strong” again contributed greatly to his popularity. Among others, Hillary Clinton disputed Trump’s claim that he would make America great again. It was already great said she. But as Joyce Carol Oates and others have indicated the idea of “American exceptionalism” is a powerful force. The danger is serious that Trump may attempt to increase his powers by demonstrating and trying to embody such exceptionalism, and that many Americans may allow him to do so, achieving the psychological satisfaction of raising an index finger and chanting “we’re number one.”

In 1939, on the eve of Germany’s attack on Poland, many Germans, although certainly not Jews and other unfortunates, might have believed that Hitler’s actions since 1933 had furthered the German common good by making Germany great again. But by 1945, they saw more clearly what evil and suffering his policies had imposed, not just on foreign nations but on Germans themselves.

If Donald Trump attempts to trumpet American exceptionalism and pursues aggressive foreign policies, many U. S. citizens may for a while believe he has made our country “great again.” But pursuing such exceptionalism, whether in Germany in the 1930s or in the USA under a Trump presidency, is not the way to national greatness or heightening the common good.

Despite all the dangers that Trumpism presents, perhaps I overestimate them. I hope so. But wary we must be.