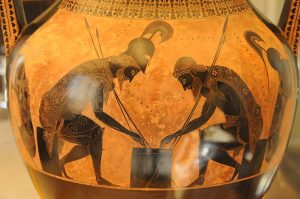 In the Homeric Iliad, the hero Ajax is second best in comparison with Achilles; in the Homeric Odyssey, he is second best in comparison with Odysseus. In the Iliad, it is made explicit that Achilles is ‘the best of the Achaeans’, while Ajax is only the second best. In Chapter 2 of my book The Best of the Achaeans (1979; 2nd ed. 1989), I offer a full argumentation. As for the Odyssey, the status of Ajax as the second best is more problematic. After the death of Achilles, the possession of his armor had been contested by both Ajax and Odysseus, and the contest had been won, unfairly, by Odysseus. The cheating of Ajax by Odysseus had brought about the most tragic consequences. His intense feelings of anger had caused Ajax, in a fit of madness, to slaughter herds sacred to Athena, and this wanton slaughter led ultimately to his suicide. The story of the anger, the madness, and the suicide was a major theme in the verbal art of ancient Greek poetry (as we see most clearly in Pindar’s Nemean 8 and Sophocles’s Ajax)[1] and in the visual art of ancient Greek vase paintings (the images are collected and analyzed by Williams 1980 and others).[2] In fact, this story was a subtext already in the Homeric Odyssey.

In H24H 5§11, I refer to the behavior of Ajax as a dangerous cult-hero in his afterlife. This behavior is linked, I argue there, with his everlasting frustration and anger, even after death. And why the anger? It was because he had been cheated out of becoming the best of the Achaeans. The visible proof for being the best would have been the awarding of the armor of Achilles, after that hero had been killed, to Ajax. Instead, the award went to Odysseus—and unfairly so, according to the tradition.

I quote here from what I say in H24H 15§50 about the abiding anger of Ajax even in death:

[W]hen a herd animal on the Trojan Plain dies unexpectedly, the herdsmen believe that the cause is surely the angry hero Ajax (Philostratus Hērōikos 18.3), whose anger is linked to the myth about his ritually incorrect slaughtering of herd animals (again, 18.3); this myth, in its classical form, is brought to life in the tragedy Ajax by Sophocles. By implication, the disastrous incorrectness of the hero’s slaughtering of the sacred herds in myth must be compensated for all time to come in ritual, and that compensation takes the form of ritually correct sacrificial procedures in the slaughtering of herd animals by herdsmen who tend their herds on the Trojan Plain.

Cult heroes, when they feel benevolent, will cure illnesses afflicting humans, animals, and plants—just as they will inflict these same illnesses when they feel malevolent. And the presence of the hero in such situations is signaled by feelings of a certain kind of sacred “frisson,” conveyed by the evocative word phrikē, ‘shudder’—as when the angry phantom of Ajax makes an epiphany by shouting at shepherds who have been foolishly taunting his restless spirit (18.4).

In H24H 22§9, I quote from Plato’s Apology of Socrates 40e–41c the words of Socrates concerning the unjust death of Ajax (41b), and, at 22§10, I highlight the fact that Plato’s Socrates blames the death of Ajax not only on the unjust treatment he received from his fellow Achaeans but also, more importantly, on the machinations of an unjust Odysseus.

A Game of Dice for Ajax and Achilles

In the Boston Museum of Fine Arts (Krupp Gallery, 215A), we find a most relevant picture painted on an oil flask (lekythos) dated to 500 BCE or so and originating from Athens (Accession Number 95.15). The black-figure painting on this vessel shows the hero Ajax engaged in a board game involving the throwing of dice. He is playing against the hero Achilles, and the goddess Athena stands in the center of the picture, presiding over the dice throws that the two heroes make. 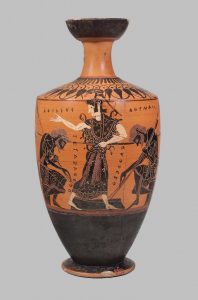 The Greek lettering on the vase shows ΑΧΙΛΛΥΣ over the head of Achilles and ΑΙΑΣ over the head of Ajax. In front of Achilles is a vertical inscription ΤΕΤΑΡΑΦΕΡΟ, meaning ‘I have four’, while the inscription in front of Ajax shows ΔΥΟΦΕΡΟ, meaning ‘I have two’. The goddess Athena, indicated by the lettering ΑΘΕΝΑΑΣ to the right of her head, gestures toward Achilles. Achilles is evidently the winner, since he has the higher number for his throw of the dice.

There is a comparable scene painted on Vatican amphora 344, dated around 540 or 530 BCE. The painter is Exekias, and his black-figure painting shows Ajax and Achilles engaged once again in a board game that involves the throwing of dice, and this time the lettering indicates that the number of the throw made by Achilles is four while the number of the throw made by Ajax is three.

This theme of dice playing, not attested in the Greek verbal arts, must be very old. In the cognate epic traditions of the Mahābhārata, which is the oldest and largest epic of India (the canonical version contains about 100,000 lines of Sanskrit poetry), the playing of dice is at the core of the overall plot of the whole story. The hero Yudhiṣṭhira gambles away his kingship, all his possessions, and even his own self in a series of catastrophic dice games.

In the visual art of Greek civilization, as exemplified by the vase that I have highlighted from the collection housed in the Boston Museum of Fine Arts, a comparable epic scene comes to life.[3] This epic version, attested in the visual arts, is nowhere to be found in the attested textual evidence of the corresponding verbal arts. But this version is nevertheless a truly epic scene. With a throw of the dice, Ajax dooms himself to an eternity of angry frustration over losing a chance to become the best of the Achaeans.

[3] Of equal importance is another vessel housed in the Boston Museum of Fine Arts (Krupp Gallery 215A): it is a two-handled jar (amphora), originating from Athens and dated around 525–520 BCE (Accession Number 01.8037), featuring on its two sides a black-figure and a red-figure painting of the same scene, as it were. Once again, it seems, Achilles and Ajax are engaged in a board game involving a throw of the dice. 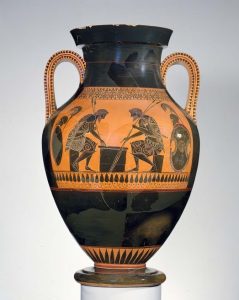 Two-handled jar (amphora) with Achilles and Ajax, by the Andokides and Lysippides painters, c.525-520 BCE / Museum of Fine Arts, Boston