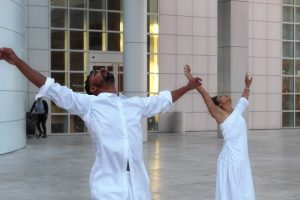 An is not exclusive to sound. It can also pertain to flesh.

For choreographer Samantha Blake, an echo is not exclusive to sound. It can also pertain to flesh. Her site-specific dance Sky Echo, which recently premiered at the Getty Center as part of the experimental performance series Friday Flights, was an exercise in multiplicities. One body was represented by three—each blurring into the next—as performed by dancers Diana Medina, Christopher Bordenave, and Sasha Rivero in collaboration with the dance collective No)one. Art House. Staged across the grid of the Getty’s travertine-clad courtyard and fountains, Sky Echo showcased flesh’s potential to echo and blur.

The performance began near the Museum Entrance Hall. Trumpeter Anthony Calonico, perched on a balcony, called upon the dancers. They emerged in unison, with Bordenave and Rivero dressed in long, flowy white cotton garments, and Medina clad in a purple dress designed by Mara Hoffman.

Their initial movements were supple and grand; their bodies moved in concert and then broke into solos creating a pathway across the courtyard. Their movement was oriented skyward. Craned necks ran alongside elongated arms, transitioning into the following movement, a turn. Blake’s choreography, however graceful, is not stagnant; it is slow and pensive, prompting patience and attentiveness from the audience. 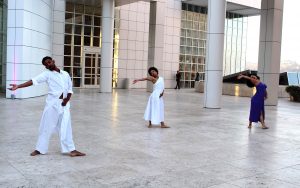 Bordenave, Rivero, and Medina’s initial movements at the entrance to the courtyard

The nomadic performance formed a series of shared pas de deux, joining audience to dancer, dancer to dancer, and all to place, bringing everyone into an immersive, sensorial experience. The audience followed the dancers as they travelled across the courtyard. By crouching down or lifting up on tippy-toes, audience members caught glimpses of different scenes as the crowd shifted and grew thick or thin. Each person watched the performance in vignettes, capturing views from various vantage points and through cracks in the crowd, patching together their own rendition of Sky Echo. 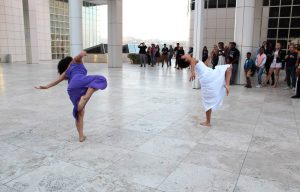 The audience wrapped around Rivero and Medina’s preliminary movements

I watched the dance in rehearsal, with a few people, the courtyard’s vacancy assisting the dance’s contemplative fervency, something I feared would be lost with the trailing audience. But the intimate potency of the dance that I saw then remained during the actual performance. The only difference in Sky Echo’s emotional authenticity was scale. Blake’s choreography conjured a tight, meditative vortex that gravitated and captivated the audience. Vocalist Akua’s breathy dulcet and ambient electronic sounds rendered the space atmospheric and solemn, softening the audience’s raucousness. 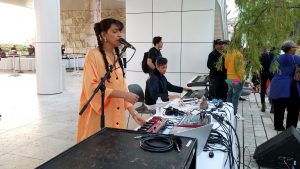 Blake prioritizes the sensorial. It’s a principle she shares and practices with No)One. Art House, a Los Angeles–based collective founded in 2014 by Christopher Bordenave, Nia-Amina Minor, and Jeffrey Ware, who are committed to the visceral, immersive potential of dance. Often performing in DIY venues, museums, and galleries, they are uninterested in the traditional isolationist model of presenting dance in a black-box theater. Rather, they build on the growing call for dance to enter the fine arts space—in part in pursuit of American institutional support, and in part in order to elucidate dance’s long, intertwined history with the fine arts. It is a conviction that has attracted the artist Solange and her collective Saint Heron’s to collaborate on Orion’s Rise, Solange’s performance series of the 2016 album A Seat at the Table.

Halfway through the performance, the trio moved into the long rectangular fountain in the courtyard. One by one, they cupped water into their hands and let it wash down their heads. They repeated this gesture until each dancer was completely immersed in the fountain. It was at this point that the dance started to complicate and then blur.

Their movements accelerated as they jetted and pushed from the narrow fountain walls. Water flew into the air, splashing the audience. It read as a negotiation between the dancers, as well as the silent onlookers, asking how to be together and dance. For the climax, they folded and unfolded into one another in a diagonal line. The repeated gesture made it appear as if their fleshy entanglement could breathe. It was an embodiment of Blake’s interest in the porousness of things: water, air, and flesh. 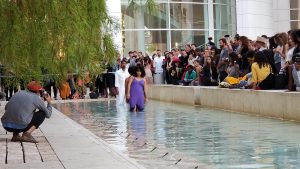 The trio descending into the courtyard fountain 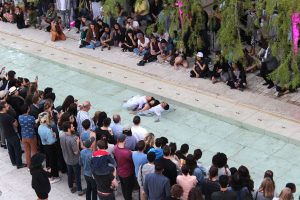 Water contextualizes and accentuates Sky Echo. It’s a material that speaks to Blake’s commitment to the confluence of things, places, and people. Blake is a student of the Orishas—black Caribbean-centric goddesses symbolizing different bodies of water—and they permeate her choreography and her music practice as Muñeka, which centers on the dexterous, lurid rhythms, and sounds from Latin America and the Caribbean. For Blake, water’s essential qualities are not just metaphors for describing the multiplicity of things, experiences, or people but are portals into different modes of being and feeling in the world.

Blake describes water as a lifeline to ancestors—a line connecting the Afro-Latinx and Caribbean diaspora in Los Angeles. She said the initial idea for the performance sprouted from a poem; “a whisper to the universe,” reads one line. It’s a guiding prayer potent enough to reverberate throughout the Getty Center with motion and sound. Blake used the reflectiveness and malleability of water to accentuate the blurring of the dancers like droplets of water, merging and diverging from one another.

Sky Echo is a deviant dance. Often I would find myself where a walls bodies would block my line of sight. Uneasy and a bit irritated, I surrendered into another ways of seeing. I relied on a different ensemble: Calocino, Akwua, and the audience to illustrate the dance. The swelling of a particular note, water splashing, or how the crowd framed the movement of the dancers. Blake’s choreography implicates the audience in the dance through the sensorial rather than through one-dimensional sight. It charges away from the pedestal of individualism and forges a question about worldly possibilities spanning difference and collectivity. Sky Echo’s ambitions are haptic and phenomenological rather than exclusively cerebral. The piece illustrates philosophical principles such as Hortense Spillers’s formulations on the flesh and body and Fred Moten’s poetics of blurring, seeking to conjure a different world through hybrid modes of feeling.

Sky Echo’s final scene—Medina like a mermaid, reclined on a rock, situated in an architectural niche of three travertine walls surrounding a pool dotted with boulders and hidden behind a pavilion on the eastern side of Getty—surrendered the endless duel or dance of three, waiting for them to follow her lead, watching Bordenave and Rivero’s duet. The two moved in concert while swirling through the walled-in lagoon, which felt expansive yet enclosed. The two seemed to endlessly oscillate between dueling and dancing. And then, again in unison, all was resolved, and the three lay floating on the surface like boulders.