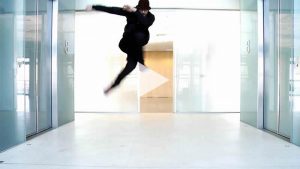 Are you normal? What does it mean to be normal? Is it a good thing, or does it mean you’re just plain dull? Is being abnormal more fun, does it make us seem more kooky, quirky, individual – or could it mean we’re cut off from society, perceived as odd or even mentally ill?

abNormal is a 30-minute documentary from Mosaic, exploring and celebrating what it means to be normal. Looking through the eyes of several very different minds, with their own unique talents and perspectives, the film points a microscope at human behaviour, asking viewers to question their perceptions of others and even of themselves. And, as society grows ever more into a disconnected suburban sprawl, abNormal asks whether the way we live our lives threatens our mental health.

Barry J Gibb’s odd career began as a molecular biologist and neuroscientist but he succumbed to creative urges and started freelancing as a hybrid film maker and writer. After several documentaries for Channel 4 (Life After Coma) and the BIMA Award-winning Routes, he became the Wellcome Trust’s Science Multimedia Producer. In 2011, his 30-minute film Until won the Imagine Science Film Festival’s Nature People’s Choice Award. His book, The Rough Guide to the Brain, is now in its second edition.