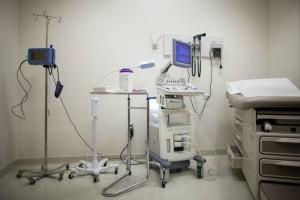 Twenty weeks. It’s a seemingly arbitrary measure that recently shattered the lives of Daniel and Taylor Mahaffey as the Austin couple was happily preparing for the birth of a son.

Late on a Wednesday, Taylor Mahaffey, 23 — who had been previously diagnosed with a condition known as incompetent cervix — felt something was off. Having suffered through a miscarriage during a previous pregnancy, the couple rushed to St. David’s North Austin Medical Center only to discover that Taylor’s cervix had prematurely dilated and their son’s legs were already emerging.

Hospital doctors attempted several emergency procedures to keep the developing baby inside the womb, said Daniel Mahaffey, 29. But nothing worked.

“We just wanted him out,” Mahaffey said. “We didn’t want him to suffer.”

But the couple ran into the state’s ban on abortions at or after 20 weeks of gestation, included in strict anti-abortion legislation known as House Bill 2 passed by state lawmakers in 2013. Because the baby and mother were technically healthy, doctors told the Mahaffeys they could not induce labor even though their son would not survive out of the womb.

“They said because of the law, they couldn’t induce because it would be considered an abortion,” Daniel Mahaffey said. His wife was just shy of the 20-week mark, Mahaffey said. “I think they were afraid because we were so close,” he added.

The law allows abortions after 20 weeks only when the mother’s life is in danger or when a fetal abnormality has been detected. Neither of those applied in the Mahaffey’s case. The couple was left to wait for “nature to take its course,” Mahaffey said.

“The whole thing was an absolute nightmare,” Mahaffey said of the three days they spent crying and waiting. “She could feel him moving around.”

The couple returned to the hospital after Taylor began bleeding. Last Sunday, she eventually gave birth to a stillborn baby boy.

The tragic ordeal appears to be one of the side effects of House Bill 2, and several doctors say such consequences are not limited to the Mahaffey’s case. The 2013 restrictions — and the larger, intense political climate in Texas surrounding abortion — are overwhelming the physician-patient relationship and holding some doctors back from acting on medical judgment that balances professional protocols and compassionate care, they say.

Other restrictions in the law include a requirement that doctors obtain admitting privileges at a hospital within 30 miles of the abortion clinic from which they work, and a provision requiring abortion facilities to meet the same hospital-like standards of surgical centers. The constitutionality of those provisions is currently being considered by the U.S. Supreme Court.

Protocols for determining when a medically indicated induction of labor is necessary weigh many factors, and some doctors deciding to move forward with the procedure might meet resistance at some institutions, said Dr. Moss Hampton, an OB-GYN in Odessa who chairs the Texas arm of the American Congress of Obstetricians and Gynecologists.

“I think everybody’s tolerance for that is going to be different,” Hampton said. “I think the law has got a lot of people scared, and if they feel they can’t defend [a procedure] 100 percent then I’m sure there are a lot of folks out there that would just back off.”

The 2013 restrictions were passed amid a heated debate over women’s constitutional rights to access abortion and the state’s role in restricting the procedure. Texas Republicans argued the restrictions were designed to protect women’s health and improve the standard of care for abortion services.

Democrats and abortion rights advocates were joined by major players in the medical community in opposing the restrictions, with the American Medical Association and the American College of Obstetricians and Gynecologists wading into the debate to push back against the measure, arguing it interfered with patient care and the patient-physician relationship.

Physicians say they are seeing the hostile climate surrounding abortion come into play in treating patients. This often leaves the type of medical treatment a pregnant woman in a medical emergency receives dependent on each physician and hospital and their standards related to inducing labor. Those standards often vary in more conservative areas of the state and at publicly funded or religiously affiliated institutions.

Citing patient privacy laws, Denise Bradley, vice president for communication and community affairs at St. David’s, said in a statement that the hospital is unable to discuss specific details of the Mahaffey’s situation but did point out that HB 2’s 20-week ban “does not apply in this particular situation.”

St. David’s policy only allows for terminating a pregnancy to avert death or substantial harm to the mother, or if a fetus is incompatible with life.

“St. David’s HealthCare strives to provide exceptional and compassionate care to all patients,” Bradley added. “While we always work within the parameters of the law, our patients’ well being is our top priority.”

But pointing to situations similar to the Mahaffey’s, some in the medical community insist that politicians’ interference in the physician-patient relationship has been felt statewide.

Such interference is the “most serious and far-reaching effect” of so-called TRAP laws, or targeted regulation of abortion providers, on medical care, said Dr. G. Sealy Massingill, a Fort Worth-based OB-GYN and president-elect of the Texas Association of Obstetricians & Gynecologists.

“It’s somewhat surprising to me that the people who believe that government shouldn’t have any interference in our lives think the physician-patient relationship is something politicians should be interfering with,” Massingill said.

It’s something Daniel Mahaffey didn’t expect to be affected by so personally over a child the couple desperately wanted, and have spent the past week grieving over.

The couple named their son Fox after one of the lost boys from Peter Pan — his wife’s favorite childhood story. The mythology behind the story is that Peter Pan guided children close to heaven, Mahaffey said, so “we figured it was appropriate.”