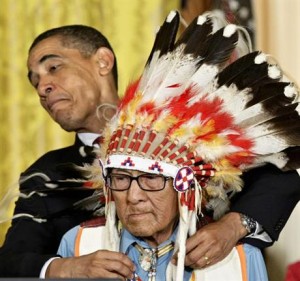 A member of the Crow Tribe’s Whistling Water clan, Medicine Crow was raised by his grandparents in a log house in a rural area of the Crow Reservation near Lodge Grass, Montana.

His Crow name was “High Bird,” and he recalled listening as a child to stories about the Battle of Little Bighorn from those who were there, including his grandmother’s brother, White Man Runs Him, a scout for Lt. Col. George Armstrong Custer.

His grandfather, Yellowtail, raised Medicine Crow to be a warrior. The training began when Medicine Crow was just 6 or 7, with a punishing physical regimen that included running barefoot in the snow to toughen the boy’s feet and spirit.

Medicine Crow in 1939 became the first of his tribe to receive a master’s degree, in anthropology. He served for decades as a Crow historian, cataloging his people’s nomadic history by collecting firsthand accounts of pre-reservation life from fellow tribal members.