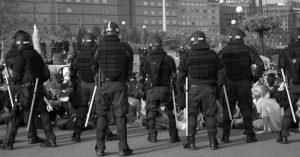 Police in riot gear stand behind a group of protesters at the 2008 RNC in St. Paul, Minnesota.  (Photo:  Brendan Scherer/flickr/cc)

‘The restrictions on speech put in place by the city of Cleveland are arbitrary, unnecessary, and unjustifiable.’

The American Civil Liberties Union of Ohio on Tuesday filed a lawsuit in a federal court against the city of Cleveland charging that the rules for the 2016 Republican National Convention violate free speech and “criminalize everyone.”

The rules for the convention, which takes place July 18-21, cover a 3.3-square mile so-called Event Zone. They include restrictions on the duration and location of protests and marches, and require permits for parades. No proverbial soapbox will be allowed within the Event Zone. The rules have already been the target of sharp criticism by advocacy groups and protest organizers.

According to Christine Link, executive director of the ACLU of Ohio, “The restrictions on speech put in place by the city of Cleveland are arbitrary, unnecessary, and unjustifiable.”

“City officials have refused to make proper accommodations to protect free speech, so we are asking the courts to step in now,” she said.

The rules also include a list of banned items, such as tennis balls and canned food but not guns. The lawsuit decries the “Regulations’ draconian reach,” and explains how the list of prohibited items would affect the city’s homeless population:

Regulations prohibit the possession of items that are essential to and often carried by homeless people every day, items as basic as string, rope, tape, coolers, large backpacks, and tents, among other things. By designating many of their basic, everyday necessities as contraband, and drawing an unreasonably wide zone for enforcement, the City is subjecting its homeless residents to unnecessary encounters with the police, and interfering with their rights to liberty, privacy and movement.

A university, dormitories, homes, and grocery stores are in the zone as well.

The Regulations, however, prohibit shoppers from carrying cans, canned goods, bottles, and aerosol cans out of a store. University tennis courts are located in the Event Zone, but tennis balls are “prohibited” in the zone. The absurd reach of the Regulations over everyday items goes on and on.

The suit also claims that the city is delaying processing applications for permits to engage in free speech activities, such that groups that “are planning marches or rallies involving three to five thousand participants will lack sufficient time to complete critical logistical arrangements. The City’s inaction is a constructive denial of the permits, and a prior restraint of this First Amendment activity.”

“By effectively denying permits through attrition,” Link stated, “Cleveland is removing the people from an event which is supposed to be a celebration of democracy.”

The suit is asking the city to amend its “unjustified restrictions on items and activities,” for the Event Zone size to be reduced or eliminated, for the city to properly process permit applications, and to provide for improved official and alternate parade routes and places for assembly.

The ACLU of Ohio and other civil liberties organizations had already expressed concern in March in an open letter (pdf) to Cleveland Mayor Frank Jackson and City Council president Kevin Kelley over the extent of militarization that could accompany the convention, including the city’s reported purchase riot gear and surveillance equipment.