The world has witnessed enormous advances in autonomous passenger vehicle technologies over the last dozen years. The performance of microprocessors, memory chips and sensors needed for autonomous driving has greatly increased, while the cost of these components has decreased substantially. Software for controlling and navigating these systems has similarly improved. Buoyed by notable milestones and relentless progress in autonomous technologies, a self-reinforcing cycle emerged – optimism by industry, academia and the public leading to more effort to develop autonomous technologies, with consequent successes generating even more optimism.

The successes are real. In 2004, not a single vehicle completed even 10 miles of the Defense Advanced Research Projects Agency (DARPA) Grand Challenge for autonomous navigation across 150 miles of the Mojave Desert. Nineteen months later five vehicles were up to the task. In 2007, six teams completed the far more difficult DARPA Urban Challenge, which involved navigating through a city-type environment with other autonomous and human-driven vehicles obeying California driving laws.

Subsequently, Google recruited several of the technical leads from the Grand Challenge teams to develop autonomous cars. All the major car manufacturers in the United States, Europe and Japan now have serious efforts to develop autonomous passenger vehicles. Most notably, upstart Tesla boldly sells vehicles equipped with sensors and software that allow operators to run the cars in autonomous mode in various situations including highway driving. Cars operating autonomously already have logged millions of miles on U.S. roads.

However, the recent fatal crash of a Tesla Model S operating in “autopilot” mode suggests that some people may be too confident in this new technology in its current state. As we have seen with other innovations, sometimes a user’s death causes development to slow down – but other times, progress speeds up to address the newly uncovered problems.

The effects of tragedies involving new technology vary greatly. The public’s optimism about civilian space tourism increased dramatically with the successful flights of Scaled Composites’ SpaceShipOne in June 2004. But that optimism faded quickly after the crash of the Virgin Galactic SpaceShipTwo in October 2014, in which the copilot was killed.

The response to the Tesla accident differs from the Virgin Galactic fatality at least in part because of the distinct difference in potential societal benefit of the technology. Civilian space tourism promises expensive thrill rides to a very tiny number of wealthy customers. So, when its safety was called into question, it is not surprising that interest declined. (In late July, the company received a license to resume test flights, but does not expect to fly passengers until at least 2017.)

On the other hand, autonomous vehicles have the potential to help hundreds of millions of people and to save tens of thousand of lives per year in the US alone. The National Highway Transportation Safety Administration (NHTSA) estimates that 94 percent of the more than 35,000 U.S. traffic deaths in 2015 were due to the driver. These brutal numbers mean that the recent Tesla autopilot fatality will not slow the push to automate passenger vehicles.

The potential for learning can spark improvement

In fact, the Tesla driver’s death may actually accelerate progress on autonomous vehicles. As NHTSA Administrator Mark Rosekind remarked in July at the Automated Vehicles Symposium 2016,

“When something goes wrong, or a highly automated vehicle encounters an edge case – something it hasn’t been programmed to deal with – that data can be taken, analyzed and then the lessons can be shared with … all automated vehicles. [By contrast,] new drivers must learn on the road and make the same mistakes as thousands before them.”

The initial deployment of airbags in automobiles in the 1990s provides an apt comparison. Airbags saved many lives from the outset. However, there were instances in which the passenger side airbag killed children, especially infants secured in rear-facing child safety seats – the so-called “edge cases” for this technology.

In response, regulators and car manufacturers quickly introduced sensors to detect the weight of any passenger, and systems that deactivated the airbag if the passenger was too light. Public service announcements warned drivers to ensure children rode only in the rear seats, either buckled up or in child safety seats. These actions resulted in an astonishing 96 percent reduction in children killed by airbags at between 1996 and 2001 even though the number of airbag-equipped vehicles increased by a factor of five. 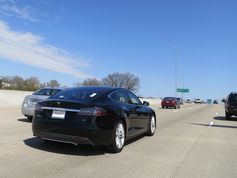 A Tesla Model S, like the one pictured, was involved in the first fatal crash of a vehicle with autonomous-driving technology. Paul Sableman/flickr

The effect of the Tesla crash is likely to be similar. The apparent cause of the accident was the vehicle’s failure to detect a white truck against a bright sky background, and the failure of both car and driver to react in time. Like the injuries caused by some early airbags, the crash was an unintended consequence of a system designed to improve safety.

As additional details about the crash emerge, the manufacturer can redesign the system to essentially eliminate the problems. And users of the technologies will become less complacent and more informed about their capabilities and limitations.

The effect on trust

The most lasting effect of the Tesla crash will be its damage to the trust people put in these systems. Kristin Kolodge, who heads human-machine interface work at market research firm J.D. Power, remarked at the Automated Vehicles Symposium, “It’s extremely unfortunate the Tesla incident that happened. This element of trust is extremely fragile.”

Counting whose specific lives airbags have saved in crashes is relatively easy. But it is much more difficult to measure the benefits of autonomous vehicles replacing reckless, drunk or otherwise impaired drivers and reducing crashes as a result.

Nonetheless, the prospect of greatly reducing accidents, injuries and deaths due to reckless driving, drunk driving, distracted driving, impaired driving, speeding and road rage means that increasingly automated cars will be a fact of life in the years ahead. As U.S. Transportation Secretary Anthony Foxx recently said, “Automated vehicles are coming. Ready or not, they are coming.”