Almost every day, it seems, another historian comes out against the candidacy of Donald Trump.  In the last month alone Ken Burns and David McCullough established a Facebook page, Historians on Trump, that features videos by prominent historians ridiculing Trump’s campaign.  The page features videos by the profession’s heavy hitters:  William Leuchtenburg, Bernard Weisberger, Nell Irvin Painter, Vicki Ruiz, Kai Bird, Robert Caro, and Michael Kazin, among others.  The videos have drawn more than 5 million views.  Shortly after the Facebook page went up another group went public, Historians Against Trump   This group quickly drew the support of more than 600 scholars.  (More historians than that oppose Trump, but many are uncomfortable signing a petition against Trump that suggests their standing as historians gives them special authority to denounce him.)

None of this is surprising.  Historians as a group lean liberal. When Jon Meacham, the presidential biographer, published a tweet disparaging the GOP’s embrace of Trump Annette Gordon-Reed, the scholar who wrote the definitive book on Jefferson’s slave mistress, immediately retweeted it. 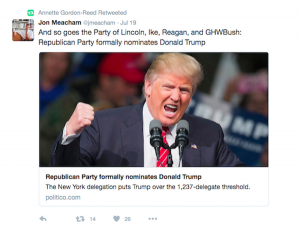 But it’s not just been the well-known liberals in the profession who have put themselves on the record opposing Trump.  So have many well-known conservatives, historians who have long been identified with the GOP.  One of the first to come out against Trump was Ron Radosh, whose next book is a defense of Warren G. Harding.  Radosh has ridiculed Trump on Twitter and congratulated George Will for deciding in the wake of Trump’s triumph to leave the Republican Party. 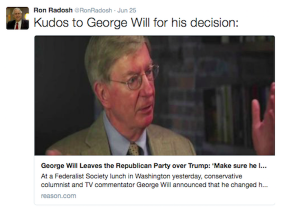 Shockingly, perhaps, British ex-pat, Niall Ferguson, the erstwhile Harvard professor of history who migrated to the Hoover Institution at Stanford, publicly began implying that Trump poses a threat to liberty: 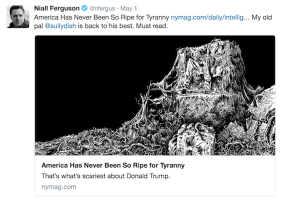 A few weeks later Daniel Pipes, the conservative who backed the Iraq War and supported George W. Bush’s administration,  announced he could not stomach a Trump presidency and decided that he too, like George Will, was leaving the GOP.

So are there any historians who have come out for Trump in one way or another?  We looked.  We found five, two academic historians and three non-academics.

The most high profile academic to come out in favor of Trump is Victor Davis Hanson, the American military historian, former classics professor, and Martin and Illie Anderson Senior Fellow at the Hoover Institution at Stanford University. In an article in the National Review he said that faced with the choice of Trump versus Hillary Clinton the choice is easy.  It’s Trump.  But he devoted most of the article to a recitation of Trump’s shortcomings.

Timothy R. Furnish,  who holds a Ph.D. from Ohio State University in Islamic history, is a former college professor and consultant to the U.S. Army Special Operations Command.  In May he wrote in an article for HNN that he supports a limited ban on Sunni Muslims to the United States (Sunnis, he says, are the ones involved in most of the terrorism incidents involving Muslims).  Faced with a choice between Trump and Hillary Clinton, he’ll vote for Trump he tweeted in August.

The three non-academics, who are frequently described as historians, all have strong ties to the conservative movement.

Derek Boyd Hankers is an African American political operative who wrote a book that claims blacks in large numbers fought for the South during the Civil War, a myth debunked by academic historians.  If this, as some in the media seem to think, makes him a historian, then he can be counted as the only historian in the country who thinks Donald Trump is great.

Then there’s David Barton, who says that Christians, despite their qualms, should accept that Trump is “God’s guy” in this election. But is Barton a historian?  The head of a Ted Cruz PAC, Barton is the author of The Jefferson Lies, which won him a large following among evangelical Christians.  (The book claims America was founded as a Christian country.) In 2012 historians voted in an HNN Poll that Jefferson Lies was the least credible history book in print. Shortly after his publisher withdrew the book. Recently a Christian publisher put it back into print.

What does David Barton, an evangelical Christian, believe? He thinks that women shouldn’t be allowed to vote, denies global warming, and says school children should be armed to prevent mass shootings.

Another evangelical Christian in favor of Trump is the New York Times bestselling author, Eric Metaxas, who’s written well-received biographies of Dietrich Bonhoeffer, the anti-Nazi German pastor, and David Wilberforce, the anti-slavery British politician. Like Barton, whose work Metaxas cites uncritically, Metaxas acknowledges Trump is not an ideal candidate. But as he told the Daily Beast,  “I would put him more in the category of a relative who is basically a good guy, like an uncle, but he says a lot of things you don’t agree with. But in his core he’s not Machiavellian or genuinely xenophobic or bigoted. If I believed he were, I wouldn’t vote for him.”

Those are the Big Five:  Donald Trump’s historians.

But there’s also one more:  Newt Gingrich, the former Speaker of the House of Representatives.  Gingrich is indeed a historian.  He possesses a Ph.D. in history and long ago taught history at the college level.  But he clearly is in a class by himself. Historian?  Activist?  GOP bomb thrower? You decide.

When this article first went to press it included Wilfred McClay as a Trump supporter.  We included McClay, a conservative historian currently holding the G.T. and Libby Blankenship Chair in the History of Liberty at the University of Oklahoma, after we came across his name in the Weekly Standard’s list of “Trump’s Intellectuals.” But when we reached out directly to Professor McClay he denied he’s supporting Trump.  He asked us to print this statement:

Thanks for your message, which gives me a chance to say as clearly as I can that I’m NOT supporting Trump, and that was not at all the gravamen of my comments [to the Weekly Standard]. What I was trying to do in my comments is to respond to the current situation with the disinterested neutrality of a historian. I hope that wasn’t a mistake on my part. Can I therefore please clarify?

I was commenting, in an interview with Fred Barnes of the Weekly Standard, on the fact that we have a condition in BOTH parties in which a massive number of core or base voters have come to feel their views are completely unrepresented and disrespected by the established leadership of their party. This is just as true in the Democratic party as in the Republican, although the difference is that Trump effected a hostile takeover of the Republican party, whose ultimate results are yet to be seen. Sanders lost his bid, made an uneasy peace, and his voters are now contemplating their options in the wake of a bitterly unsatisfying process. While I would not necessarily place Jill Stein or Gary Johnson in the same category as Donald Trump, they may well succeed in attracting some of that dissident vote, and thereby affect the electoral outcome.

I will say one thing, however, which I hope can better explain my words to Barnes that you’ve quoted. I have enormous sympathy for a great many of the voters who find themselves drawn to Trump, and to other outside-the-mainstream candidacies. These are the people that Charles Murray and Robert Putnam and J.D. Vance and Joel Kotkin and others have described so compellingly in their books, and they are our fellow Americans, and not the monsters that political campaign rhetoric so often makes them out to be. I wish they had more worthy spokespeople for their very real concerns. My point in the interview was that any group whose existential concerns are not addressed by worthy spokespeople will eventually seek out unworthy ones. And that is just what has happened in the case of Trump. Hence my admonition, at the end of the quote you cited, to the Republican party, that it had better stop exploiting those voters and start listening to them instead. The fact that many of these same voters would, a generation ago, have been blue-collar blue-dog Democrats also tells us something important about the symmetry of the current situation, and the failure of both parties.