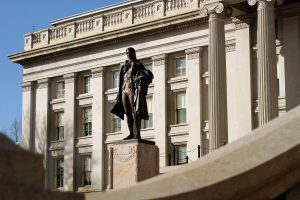 Over the objections of Thomas Jefferson and James Madison, Hamilton also oversaw the chartering in 1791 of the First Bank of the United States.

To describe Hamilton’s Bank accurately, one should note that Congress owned one fifth of its shares, and chartered it exclusively, that is, made it the only bank allowed by law to branch nationwide. (State governments chartered banks, but each state denied entry to banks with charters from other states.) The BUS monopoly franchise was among the chief of the objections of Jefferson and Madison, and deservedly so. One nationwide bank is better than none, but many is better than one. Creating a legal monopoly where open competition could and should prevail is hardly a mark of good or foresighted economic policy.

Many modern-day historians miss this point, and laud Hamilton as a man of unerring financial genius. Robert E. Wright and David J. Cowen, in their 2006 book Financial Founding Fathers: The Men Who Made America Rich, write of Hamilton’s “creative genius, as he became the architect and chief advocate of a powerful national bank.” They claim that “Hamilton’s thought was often far in advance of that of most of his contemporaries,” as when he was early to advocate a national bank. They quote Hamilton’s 1781 statement that “in a National Bank alone we can find the ingredients to constitute a wholesome, solid and beneficial paper credit,” and add: “He was correct.” They call Hamilton’s 1790 Report on the Bank “a masterpiece that cogently explained the importance of banks in a capitalist economy.” They credit Hamilton with the following argument, as though it made good sense: “Next, he stressed that all the great powers of Europe possessed public banks and were indebted to them for successful trade and commerce. The implications of the comparison were clear: if young America wanted to join the ranks of the elite powers, it too would have to create a banking infrastructure.” In much the same way, Hamilton would elsewhere argue that if the leading European nations have protective tariffs, we should have them too. The error should be plain.

Hamilton modeled the Bank of the United States after the Bank of England. But in truth, the monopoly privileges of the BOE and other national banks of Europe were badges of mercantilism, and drags on financial and economic activity by comparison with free competition in banking services. A more wholesome, solid, and beneficial credit system could be observed in Scotland at the time, with free entry into nationwide branch banking. Hamilton’s “masterpiece” was oblivious to the benefits of competition in banking, much less the separation of banking and state. In his banking policy views, as in his tariff policy views, Hamilton was a retrograde mercantilist.

Wright and Cowen note that in drafting his plan for the Bank, “Hamilton also drew on Adam Smith’s seminal work, An Inquiry into the Nature and Causes of the Wealth of Nations, where financial matters, including the advantages of banks and bank money, were amply and ably discussed. Hamilton must have brimmed with excitement as he read Smith declare that ‘the trade of Scotland has more than quadrupled since the first erection of the two publick banks at Edinburgh.’” They should also have noted that in his able discussion Smith — the penetrating Scottish critic of mercantilism — did not defend monopoly privileges in banking, but argued for free competition (see below). The “publick” banks of Edinburgh were chartered non-exclusively (note that Smith refers to the two earliest; later there would be a third plus dozens of non-chartered joint-stock banks that were similarly sized and equally branched nationwide), and were completely privately owned. Nor were they great engines of the state, as the Bank of England was according to Smith. Unlike the BOE or the BUS, which were created in large part to lend the national government money, the Bank of Scotland was actually prohibited by its 1695 charter from lending to the government.

The policy conclusion of Smith’s chapter on banking (Book II, chapter II of the Wealth of Nations) bears quoting here:

The late multiplication of banking companies in both parts of the United Kingdom, an event by which many people have been much alarmed, instead of diminishing, increases the security of the public. … By dividing the whole circulation into a greater number of parts, the failure of any one company, an accident which, in the course of things, must sometimes happen, becomes of less consequence to the public. This free competition, too, obliges all bankers to be more liberal in their dealings with their customers, lest their rivals should carry them away. In general, if any branch of trade, or any division of labour, be advantageous to the public, the freer and more general the competition, it will always be the more so.

In light of Smith’s clarity and correctness here, it is actually a telling criticism of Hamilton to note that he read Smith on banking, because it means that he ought to have known better when he promoted monopoly privileges. Although Hamilton’s Report on the Bank alludes to Smith’s understanding of how banking promotes the wealth of a nation, Hamilton either didn’t understand Smith’s policy message — the more banks competing the better — or rejected it as not helpful to his own mission of empowering the federal government, for which his chosen means was to forge an alliance between the government and a new privileged financial elite. Smith’s policy here was wise, and Hamilton’s not.

In brief, contrary to what is nearly the conventional wisdom, Alexander Hamilton was not “far in advance” of contemporary thinking on banking. He was decidedly retrograde in pushing for an exclusive nationwide bank with a sweetheart government deal. He was not a creative policy genius so much as a persuasive second-hand dealer in discredited mercantilist ideas.

Originally published by CATO Institute under the terms of a Creative Commons Attribution-NonCommercial-ShareAlike 3.0 Unported license.