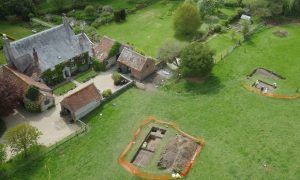 It started off as a bit of basic home improvement, but it ended up with the discovery of one of the largest Roman Villas ever found in the UK.

While laying an electricity cable beneath the grounds of his home, near the village of Tisbury, in Wiltshire, Luke Irwin found the remains of what appeared to be an ornate Roman Mosaic.

But what emerged when archaeologists from Historic England and Salisbury Museum began excavating the site was even more of a surprise.

They found the mosaic was part of the floor of a much larger Roman property, similar in size and structure to the great Roman villa at Chedworth.

But in a move that will surprise many, the remains – some of the most important to be found in decades – have now been re-buried, as Historic England cannot afford to fully excavate and preserve such an extensive site.