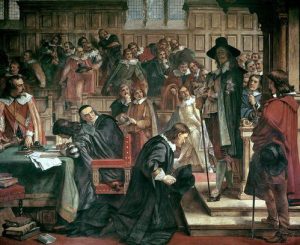 The attempted arrest of the “Five Members” by Charles I in 1642, by Charles West Cope / Lord’s Corridor, Houses of Parliament

Like all great historical events, it began with an angry Scotswoman throwing her stool at a churchman.

Or so the legend goes.

The issue was a new prayerbook, with its alleged Catholic leanings, being imposed on Presbyterian Scotland by the government of Charles I (1625-1649). When it was first read, in the churchyard of St Giles on Edinburgh’s Royal Mile, there was a riot. One waggish fellow was seen to wave a placard saying ‘Yer maw was an immigrant, yer Bawbag’, aimed at Charles. It was true.

The protests spread, and by early 1638, the Scottish people united behind a ‘National Covenant’, vowing to defend their Presbyterian Kirk against the English episcopacy. It was the biggest outbreak of bishop-bashing since Henry VIII was a teenager.

Within four years, the British Isles would be locked in Civil War. 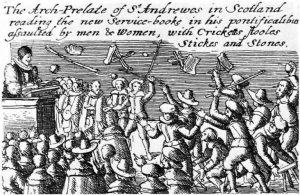 The start: a riot at a church service sparked by Jenny Geddes over the imposition of Charles I’s Book of Common Prayer in Presbyterian Scotland. Civil disobedience soon turned into armed defiance. / Scan from Scotland, A Concise History, by Fitzroy Maclean

Events in Scotland were the trigger, but the causes go back at least to start of Charles’s reign, perhaps even further.

Although under one head, Charles’s church was split into factions. In England, there were the Laudians (after the Archbishop of Canterbury, William Laud). They believed in something called the beauty of holiness, which basically meant filling churches with the kind of ornaments you normally see on a Beyoncé costume, and making them smell like a branch of Lush.

Ranged against them were the Puritans: hardliners who broadly favoured a Presbyterian church (i.e. without bishops and thoroughly reformed). These folk have had a bad press, but to be fair to them, for a bunch of football-banning, pub-closing, dance-interrupting, theatre-hating, sanctimonious kill-joy bastards, they weren’t too bad. In Salisbury, for example, they did look after the poor quite well.

Then, to make things worse for Charles there was  Scotland (Presbyterian with Catholics in the Highlands), and Ireland (Catholic, but with Protestant planters from England and Scotland in the north). Then there was Queen Henrietta Maria, who was a French Catholic.

In England, divisions over religion mingled with those over the constitution. Put simply, the question was the power of the executive relative to that of the legislature. It has been nice to have these issues settled so they don’t bother us at all in the 21st century.

Charles was a rather keen advocate of the divine right of kings, and of using the royal prerogative for doing stupid shit that harmed the country. Again, it’s nice that this no longer happens.

In 1629, after four years of bickering, two useless wars and the assassination of his best mate, Charles had done away with Parliament. During the ensuing eleven years of ‘personal rule’, Charles steadily and methodically went about pissing everyone off.

He pissed off many gentryfolk by asking them to pay ‘Ship Money’ even if they lived nowhere near the coast. One of them, John Hampden, refused to pay, so Charles – feeling that Hampden was getting on his wick – rose like an angry shitgibbon and tweeted ‘SEE YOU IN COURT!’ On this occasion the shitgibbon won by a margin of 7-5.

He fined people for failing to be knighted and – with less observable logic than James Delingpole after a Piriton overdose – he levied weird fines on people who lived in former medieval forests.

And he irked the puritans. This he did by railing off communion tables and placing them altarwise, and by forcing everyone to play football on Sundays. Good one mate.

Taking on the Episcopacy

This was all bad enough, but Charles was also possessed of an arrogance-to-talent ratio that Trumped even the worst heads of state.

When the Scots made the not completely unreasonable request that he get his grubby mitts out of their church affairs, he threw an epic strop, tweeting at 3am that they were trying to reduce him to the power of a Doge of Venice. And he was not a fan of Doge-style.

Of course, many people just got on with stuff, and lots of the real extremists shipped off to America where they founded Fox News. But when things kicked off in Scotland, when Jenny threw her stool and the Covenanters rallied, it meant there were plenty of sympathetic English, willing those Scots to win.

The wars, then, went badly for Charles. His army was rubbish, so after a desultory couple of skirmishes, he agreed to call a Parliament. They, alas, didn’t do as they were told so Charles again sent them packing (they are known to posterity as the ‘Short Parliament’).

The Scots invaded. They outmanoeuvred the royal army at Newburn, marched south, occupied Newcastle, and continued.

Eventually, they reached Ripon where they parleyed. Charles’s commissioners offered a treaty: they would pay the Scots £850 a day for the inconvenience of being stuck in Yorkshire. And he would call another Parliament.

The Parliament that assembled on 3 November 1640 has become known as the ‘long’ parliament. It would bring Britain to Civil War, the execution of the King, the destruction of Ireland and a war against the Dutch. It didn’t, however, contain Philip Davies, so were probably at evens.

Ironically, in its initial stages, it didn’t do very much, partly because it was awash with annoying petitions. One thing it did very quickly, though, was it arrested the two chief villains of the past eleven years: Archbishop Laud, and Thomas Wentworth, now the Earl of Strafford.

Wentworth was Charles’s man in Dublin. He was effective, uncompromising, and about as endearing as a Breitbart racist-joke convention. Troublingly, he also may have known about collusion between prominent Parliamentarians and the Scots rebels. Impeached and arrested, he was dispatched to cool his heels at his majesty’s pleasure, much to His Majesty’s evident displeasure.

Things really kicked off in the Spring. Strafford was brought to trial in the House. Unfortunately, the prosecution pursued the case with the incompetence of a Trump White House staffer trying to operate a light-switch. Seeing where the wind was blowing, MPs moved for an act of attainder, a rather nasty little statute which essentially declares you guilty of treason. With some well-timed crowd action and the revelation of a plot by Charles to seize the Tower, the act passed the Lords and was given the royal assent on 10 May. Strafford found himself drastically, and forcibly, shortened.

Parliament pushed on. Led by the firebrand MP John Pym, it went about dismantling the most annoying aspects of Charles’s personal rule. 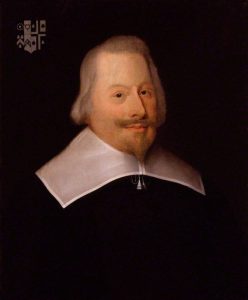 Law courts which had been used to punish peevish puritans were proscribed. Star Chamber and High Commission got the chop. Even those that were just seen as a bit legally sketchy were forced to skedaddle, such as Requests and the Church Courts. The Church of England came under scrutiny, with moves to reform it ‘root and branch’, bringing it more in line with the Scottish Kirk.

Parliament also made a radical grab for the executive, demanding the right to appoint the king’s ministers. And they passed an act guaranteeing their own perpetual sitting. All the while, Charles looked on, as powerless as Piers Morgan in the face of a fact.

Over the summer of 1641, tension continued to rise. As Charles visited Scotland, a coup by loyalists was unmasked in Edinburgh, which would have killed off leaders of the opposition and was, with a wonderful grasp of euphemism usually only seen on British trains, called the ‘Incident’.

Then, in the Autumn, the British Isles went careering over a cliff.

In October, John Pym was sent a plague sore in the post. He swore wasn’t just a really weird drunken Amazon purchase, but this was just the beginning.

A few days later, Parliament was confronted by horrifying news from Ireland. In a co-ordinated uprising, Catholics had attacked Protestant settlers. According to press reports, they had committed massacres so brutal as to make The Walking Dead look like an Abba video. Hundreds of thousands were dead, the media said.

The reports were exaggerated, of course, but they had a kernel of horrible truth.

Anyway, the English memed the shit out of them. Fear of the Irish mingled with fear of a Catholic plot to create a febrile atmosphere of racist fake news. It’s so nice we’ve grown out of this now. 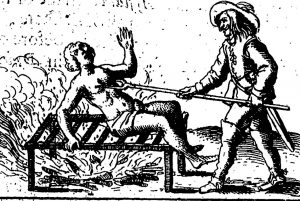 The Irish Rebellion of 1641 began as an attempted coup d’état by Irish Catholic gentry, who tried to seize control of the English administration in Ireland to force concessions for Catholics / ‘Forkin’ Hell’, Wikimedia Commons

Something had to be done, but who would do it? Charles couldn’t be trusted, not least because the rebels actually declared they were fighting in his name. But equally he couldn’t let Parliament raise an army. This was the preserve of the King. A King who couldn’t control his army was no real King.

Meanwhile, opposition  MPs were plotting an official list of the crimes of Charles’s government. This ‘Grand Remonstrance’ would be a catalogue, a very public one, of the misdeeds of Charles’s advisors.

To many, this was too far. Conservative MPs, who had grumbled over Charles’s personal rule but who had no taste for the radical direction of Pym’s ‘Junto’, had been gradually deserting the reformist cause. Many abhorred Presbyterianism, or they felt the power grab against the monarchy was too much. Or they were simply angry that the constant protests outside Parliament were stopping them from getting to Itsu.

In any case, the vote on the Grand Remonstrance was tight. In the end, it was passed by 159 votes to 148.

But the real significance was symbolic. Whereas in November 1640 Parliament was largely united behind reform, now it was split.

Now there were Royalists and Parliamentarians.

All My Birds Have Flown 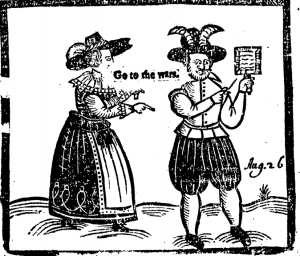 In the winter of 1641-2, Charles tried to launch another coup. He appointed Thomas Lunsford, a Royalist thug, as lieutenant of the Tower of London. He plotted to arrest his leading opponents.

He failed. Lunsford was ousted. In the City Council elections that winter, a Presbyterian majority was returned. In January, with a last roll of the royal dice, he moved on Westminster. Taking soldiers into Parliament, he demanded entry, and ordered his men to find and arrest the ‘Five Members’. (In the fine tradition of the Hundred Years War there were actually six: John Pym, John Hampden, Arthur Haselrig, Denzil Holles, and William Strode in the Commons; Viscount Mandeville in the Lords).

But they had been forewarned.

‘All the birds have flown’, Charles said, and they had, down the Thames by boat to the City of London, where they went to the Winchester and waited for it all to blow over.

Charles was defeated. He left London, not to return for seven years and under very different circumstances.

The slide into war had begun.