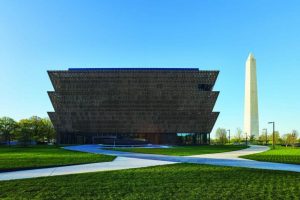 Vista of the Smithsonian’s National Museum of African American History and Culture, from Constitution Avenue, looking across the north lawn to the Washington Monument, 2016. Photo credit: Alan Karchmer/NMAAHC.

On September 24, 2016, the Smithsonian Institution will open its newest museum, the National Museum of African-American History and Culture (NMAAHC). The museum has been 100 years in the making, with the first formal calls for such a museum beginning in 1916. However, I’ve recently studied an even earlier (but unsuccessful) attempt to build a “National Museum for Colored People” that dates back to 1907.

First, let’s begin with the origin story for NMAAHC. The story actually begins with the conclusion of the Civil War in 1865, and a snub to black soldiers. In an effort to celebrate the Union victory and elevate the spirits of Washington, DC after Abraham Lincoln’s assassination, President Andrew Johnson called for a “Grand Review of the Armies.” On May 23-24, 1865, about 145,000 soldiers from the victorious Union armies paraded through the streets of the capital before jubilant crowds. Unfortunately, no black regiments were invited to the Grand Review, despite the fact that roughly 10 percent of Union soldiers were black and nearly 40,000 black soldiers had died over the course of the Civil War. The idea of somehow honoring the contributions of black soldiers and sailors began to take root. [1] 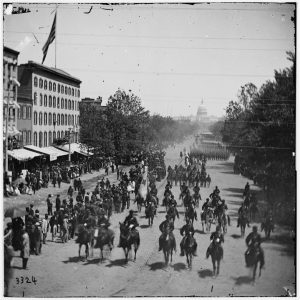 Grand Review of the Army [Cavalry] and infantry passing on Pennsylvania Avenue near the Treasury, Washington, District of Columbia, May 23 or 24, 1865. Photo by Matthew Brady, Library of Congress Prints and Photographs Division.

In 1915, Civil War veterans again gathered in Washington, DC to celebrate the 50th anniversary of the conclusion of the Civil War and to re-create the Grand Review of the Armies. This time, black leaders formed a Committee of Colored Citizens to ensure that black veterans were properly recognized, not just during the 50th anniversary Review, but permanently through some kind of memorial to honor their service. In 1916, Ferdinand Desoto Lee, a Howard University-trained lawyer, founded the National Memorial Association, with an original mission to build a “permanent memorial to colored soldiers and sailors.” Later that year, Missouri Republican Leonida Dyer introduced HR 18721, the first of many bills inspired by the National Memorial Association to create a permanent monument or memorial. The bill did not pass and so began what Robert L. Wilkins has called an “on-again-off-again, one-step-forward-two-steps-back” series of legislative initiatives to build what would become the NMAAHC. Wilkins, a federal judge and Chairman of NMAAHC’s Site and Building Committee, has captured this century-long effort in his new book, Long Road to Hard Truth: The 100 Year Mission to Create the National Museum of African American History and Culture. [2]

Now, let’s turn to another effort to celebrate African American history and culture that began just a few years earlier. In 1907, Giles B. Jackson, an African American attorney from Richmond, directed efforts to build the so-called Negro Building at the Jamestown Tercentennial Exposition in Norfolk, Virginia, but fell short in his efforts to convert the temporary exhibitions into a permanent “National Museum for Colored People.”

I became aware of Jackson’s efforts through my investigations into African American inventors, who suffered many injustices because of persistent discrimination. African Americans battled the racist perception that they were mentally inferior and technically incompetent, what historian Bruce Sinclair has called the “deeply ingrained and long perpetuated myth of black disingenuity.” [3] Thus, the black inventors who somehow managed to overcome these difficulties provided hope and inspiration for an oppressed people by merely existing. If African Americans could invent—and earn objective, government-issued proof in the form of a patent—then racist arguments about black intellectual inferiority evaporated. [4]

Thus, at the turn of the 20th century, African American leaders fought to showcase the work of black inventors at fairs and expositions. In 1901, the Virginia legislature authorized plans for the Jamestown Tercentennial Exposition, marking the 300 anniversary of America’s first permanent English settlement, founded in 1607. However, there were initially no plans to feature the achievements of African Americans, despite displays of black progress at previous fairs such as the Cotton Centennial in New Orleans (1884), the World’s Columbian Exposition in Chicago (1893), the Cotton States and International Exposition in Atlanta (1895), and W.E.B. Du Bois’s “Negro Exhibit” at the Paris Exposition (1900). [5] A prominent black Virginian, Giles B. Jackson, stepped in to rectify the situation. 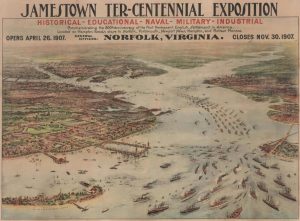 This 1907 lithograph by A. Hoen advertises the Jamestown Ter-Centennial Exposition in Norfolk, an event marking the 300th anniversary of the founding of the Jamestown colony by settlers from England. Photo Credit: Library of Virginia, via the Encyclopedia Virginia.

Jackson (1853-1924) was born enslaved in Goochland County, Virginia. After the Civil War, Jackson worked as a laborer for a prominent Richmond family, and then in the law offices of William H. Beveridge. Beveridge tutored Jackson, who become the first black attorney certified to practice law before the Virginia Supreme Court of Appeals, the equivalent at that time of passing the bar exam. In 1888, Jackson helped incorporate the True Reformers Bank, one of the first black-owned and operated banks in the United States. The bank and other flourishing black businesses in Richmond’s “Jackson Ward” drew the attention of Booker T. Washington, who asked Jackson to serve as vice president of the National Negro Business League. [6] 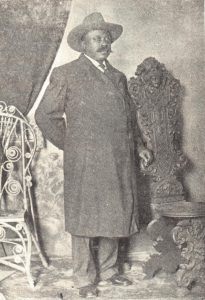 Richmond attorney Giles B. Jackson (1853-1924), director-general of the Negro Development and Exposition Company (NDEC) and the visionary behind the Jamestown Tercentennial Exposition’s Negro Building. From Giles B. Jackson and D. Webster Davis, The Industrial History of the Negro Race of the United States (Richmond, VA: The Virginia Press, 1908), p. 165.

Jackson began promoting the idea of a separate Negro Building at the Jamestown fairgrounds, with exhibitions by and about African Americans, and eventually secured the endorsement of the expo’s commissioners. In 1903, Jackson organized the Negro Development and Exposition Company of the United States of America (NDEC), headquartered in Richmond’s Jackson Ward. The NDEC set up a national board of directors that included both black and white members, with Jackson himself serving as director general. [7] Critics—including Jackson’s mentor, Booker T. Washington—suggested that a separate Negro Building would merely be “a Jim Crow affair,” serving only to emphasize African Americans’ position in a segregated society. President Theodore Roosevelt came to Jackson’s defense.  In a public appearance in front of Jackson’s Richmond law offices in October 1905, Roosevelt, addressing Jackson, said “you have my hearty support in the efforts you are making to have a creditable exhibit of the achievements of your race.” [8] To build the pavilion, Jackson raised $50,000 from individual donors, and secured an additional $100,000 from Congress. [9] 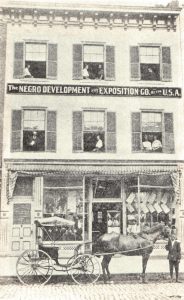 The Richmond headquarters for Jackson’s Negro Development and Exposition Company, circa 1907. From Jackson and Davis, The Industrial History of the Negro Race, p. 166.

The Tercentennial administrators provided a six acre site on the western edge of the fairgrounds for the Negro Building. Following a competition, the NEDC chose the neo-classical building design of William H. Pittman, an African American architect from Washington, DC, for the pavilion. However, limited rail service to the fairgrounds created bottlenecks and drove up construction estimates, scaring away many contractors who feared they could not build the Negro Building for the $40,000 budgeted. The NDEC was adamant about finding a black contractor, for “to have a Negro exhibit in a building erected by white mechanics would be to discount our own enterprise, and to say to the visiting world, ‘behold our incapacity to build the very roof over our heads.’” With only 100 days remaining before the April 1907 opening, the NDEC selected Bolling and Everett, a black-owned and operated construction firm from Richmond, and ground broke on February 6. Meanwhile, a dozen NDEC field agents crisscrossed the country to publicize and gather materials for the exhibition. [10] 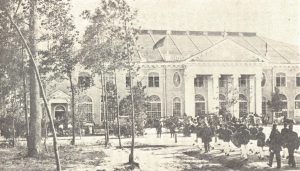 A marching band parades before the front entrance of Negro Building, Jamestown Tercentennial Exposition, 24 August 1907. From Jackson and Davis, The Industrial History of the Negro Race, p. 229.

The NEDC overcame the delays and assembled a series of exhibits that demonstrated the full range of black progress. The Negro Building showcased sculpture and handicrafts by black artisans; books and compositions by black authors and composers; poetry recitations, oratory, and choral recitals; a hospital exhibit featuring black physicians and nurses; and an operating branch of the True Reformers Bank. 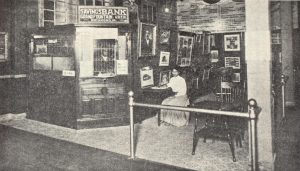 The Negro Building featured a working branch of the black-owned and operated True Reformer’s Bank of Richmond. From Jackson and Davis, The Industrial History of the Negro Race, p. 194.

Notably, a 1200-square foot Inventions Section showcased 50 prototype models and 351 US patent specifications contributed by African American inventors. For example, Aiken C. Taylor of Charleston, South Carolina, displayed three inventions: a combined cotton planter and fertilizer distributer, an extension stepladder, and an “invalid’s bed” that converted into an easy chair at the turn of a crank. E. R. Robinson of Chicago, displayed a perfectly cast railway wheel that required no subsequent grinding and polishing, and whose hard surface was five times more durable than standard wheels. G.F. Carr showcased a two-sided, heated cabinet that served as both a bread oven and an incubator for baby chicks. The gold medal in the Inventions Section was bestowed upon Samuel T. Crawford of Baltimore for a hand-cranked boat propeller that attached to the stern of a small watercraft. Jackson and his co-author D. Webster Davis captured all of these achievements from the Negro Building in their self-published book, The Industrial History of the Negro Race of the United States. [11] 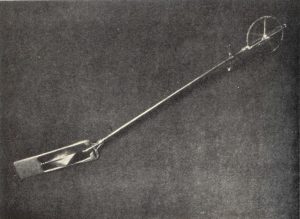 Samuel T. Crawford of Baltimore won the Gold Medal in the Negro Building’s Inventions Section for his hand-cranked boat propeller for small watercraft. Crawford would go on to earn US Patent #929,564, “Boat Propeller,” filed 9 May 1908, issued 27 July 1909. From Jackson and Davis, The Industrial History of the Negro Race, p. 332.

Overall, the Negro Building was a bright spot in an otherwise unsuccessful Tercentennial Exposition. The fair received only half of the 6 million expected visitors, leading to lower than anticipated ticket revenues, a $2.5 million debt, and bankruptcy; the New York Times called it “the most colossal failure in the history of exhibitions.” For its part, the NEDC estimated that the Negro Building drew between 3,000 and 12,000 visitors per day between April-November 1907. Even with these attendance figures, Jackson estimated that less than one per cent of the race had seen the exhibition so he campaigned to move the Negro Building and its displays to Richmond, where it would become a permanent “National Museum for Colored People.” In August 1908, the NEDC paid a $5,000 bond to the US Treasury Department to claim possession of the federally-funded building, but the effort apparently faced political opposition in Richmond and was abandoned. [12]

Despite this setback, the example set by Jackson and the NDEC inspired African Americans to host additional expositions highlighting the work of black artisans and inventors, such as the Negro National Fair in Mobile, Alabama (1908), and several expositions marking the 50th anniversary of emancipation, held in Philadelphia, New York, Chicago, and Washington, DC between 1913 and 1915. Jackson and the NEDC stayed active as well, organizing the Second National Negro Exposition in Richmond in July 1915. [13] However, with the completion of that exposition, the Negro Exposition and Development Company appears to have ceased operations.

Jackson continued to advocate for African American causes. During World War I, he was appointed chief of the Negro Division of the US Employment Service in Washington, DC, serving until June 30, 1919. He spent the next four years lobbying Congress to establish a commission that would address interracial labor problems and the poor working conditions of African Americans. Jackson testified repeatedly before Congress but the legislation never passed. Jackson became ill while attending the Republican National Convention in Cleveland, and died in August 1924. [14]

Jackson was unable to realize his vision for a “National Museum for Colored People,” during his lifetime. However, his efforts remain part of the “on-again-off-again, one-step-forward-two-steps-back” century-long saga that culminates this month with the opening of the Smithsonian’s National Museum of African American History and Culture.