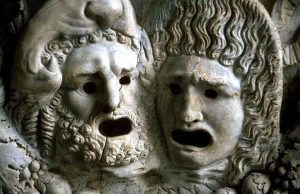 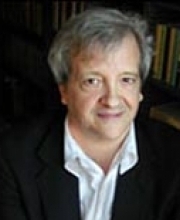 In considering the traditions of tragedy, it is important to keep in mind that the medium of tragedy in particular and of drama in general was the central context for the evolution of traditions in poetry, song, and dance in Athens during the classical period of the fifth century BCE and thereafter. The primary setting was a synthetic festival in honor of the god Dionysus. This festival was known as the City Dionysia (or Great Dionysia), and its significance is captured in the following brief description:

The importance of the festival was derived not only from the performances of dramatic and lyric poetry but from the fact that it was open to the whole Hellenic world and was an effective advertisement of the wealth and power and public spirit of Athens, no less than of the artistic and literary leadership of her sons. By the end of March the winter was over, the seas were navigable, and strangers came to Athens from all parts for business or pleasure. [1]

From the text of Aristophanes Birds 786-789, we witness the central program of the City Dionysia in a given year, 414 BC: three days, each taken up with three tragedies, one satyric drama, and one comedy.

In the highly complex institution of the Athenian dramatic festivals in the fifth century BCE, those who perform are the khoros, ‘chorus’, the song-and-dance ensemble, and the so-called first, second, and third actors. The khoros, ‘chorus’, in Athenian drama during that period performed by singing and dancing to the musical accompaniment of an aulos, ‘reed’, while the actors performed by reciting their parts, ordinarily without musical accompaniment. In Athens, the khorēgos, ‘chorus-leader’, was no longer a performer: he had become differentiated as a contemporary non-performer, who organized and subsidized both {457|458} the composition and the performance. [2] Meanwhile, the differentiated function of a performing chorus-leader was further differentiated by another split in functions, with a specialized “first actor” on one hand an unspecialized chorus-leader on the other. This further differentiation is represented in the story that tells of the primordial dramaturge Thespis and his putative invention of the first actor (Aristotle via Themistius Orations 26.316d; Charon of Lampsacus FGH 262 F 15). [3] The dialogue between the Thespian first actor and the chorus-leader would be a specialization of a more basic dialogue between an undifferentiated khorēgos, ‘chorus-leader’, and the chorus. There are yet further stages of differentiation with the putative invention of the second actor, sometimes attributed to Aeschylus, and of a third actor, sometimes attributed to Sophocles. [4] In terms of such formulations, the first actor was once the same person as the composer. Ostensibly, that was the situation with Aeschylus, whereas with Sophocles there was further differentiation between composer and actor, in that Sophocles, tradition has it, ceased to act. [5]

The chorus represents a “go-between” or “twilight zone” between the heroes of the there-and-then and the audience of the here-and-now, which happens to be, in the case of the dramas, Athens in the 5th century. [6] The chorus reacts both as if it were the audience itself and as if they were contemporaries of the heroes. The members of the chorus, who sang and danced the roles of groups such as old men or young girls who are “on the scene” in the mythical world of heroes, were non-professionals, whereas the actors (the first, second, and third actor), who spoke the parts of the main characters, were professionals. For Athenian society, the ritual emphasis is on the experience of the pre-adult chorus and, through them, of the adult audience (many of whom had once been members of the chorus themselves): there is a high value placed on the experience of the chorus-members, which is regarded as simultaneously civic and deeply personal, in undergoing the educational process of performing in the chorus of a tragedy.

In the classical period, the chorus-members in the seasonally-recurring {458|459} dramatic festivals of Athens like the City Dionysia were normally the young elite, citizens-in-the-making, but they were at the moment of their performance still marginal to society: they were selected from an age-class of pre-adult males, not yet of civic age. (As for ancient Greek society in general, however, choruses were not exclusively male. In various ritual events of various city-states, members of female choruses could be selected from age-classes of pre-adult females.)

The members of the male choruses in Athenian tragedy acted out various members of society in the world of heroes, such as old men, young girls, prisoners of war, and the like. Their acting out such roles conformed to the function of the chorus as an educational collectivization of experience. Their educational experience in the chorus was like a stylized rite of passage, which led from the marginality of their current status into the eventual centrality of their future status as citizens. In tragedy, the focus of attention was on the heroes, played by the actors. The hero, and his or her suffering, which is called pathos, was central. The witnesses to this suffering, as played by the chorus, could be marginal. They get involved in the experience of the hero, but they also have an element of distance from the hero, in their links to the here-and-now of the audience. [7]

What is passive pathos or action experienced by the hero within the world of tragedy is active drāma, that is, sacrifice and the performance of ritual, from the standpoint of the outer world that frames this world of tragedy. Such an outer world is constituted by the audience of the theater, visualized as a community that becomes engaged in the drāma and that thereby participates in the inner world that is the pathos or ‘suffering’ of the hero.

The audience, through the chorus, reacts to the experience of the hero, and this reaction translates into the personal experience of an individual in synchronizing the world of heroes with the world of the individual’s present-day society. These worlds share the stages of life that an individual passes through, such as birth, youth, adulthood, marriage, having children, divorce, growing old, death, and a hoped-for rebirth. They also share the various ordeals in passing from one stage to another, such as the primal pain of being born, the intensity of playing games, the thrill of sexuality, the pangs of falling in love, the toils of hunting, the labor of giving birth, the exertion of athletics, the shock of combat, {459|460} the tedium of aging, the throes of dying, and so on. The chorus reacts to such ordeals on the part of the hero. In this way, a chorus-member can be made to experience, to feel personally, the painful process of “growing up” by performing in the chorus, which is acting on behalf of the adult audience in reacting, through the ritual experience of song and dance, to a given mythical action experienced by a given hero of drama. [8]

The Greek word mīmēsis, as I already indicated in Hour 8e, designates the reenactment, through ritual, of the events of myth. In the case of a highly stylized ritual complex like Athenian tragedy, the reenactment is equivalent to acting out the roles of mythical figures. The acting out can take place on the level of speech alone, or else, on the level of speech combined with bodily movement, that is, dance: it is in this broader sense of acting that we can understand the force of pros, ‘corresponding to’, in the expression pros ta pathea autou, ‘corresponding to his sufferings [pathea, plural of pathos]’, in Herodotus 5.67.5, describing the singing and dancing by tragikoi khoroi, ‘tragic choruses’, at the city-state of Sikyon in the time of the tyrant Kleisthenes, in reenactment of the pathea, ‘sufferings’, of the hero Adrastos. [9] The fundamental meaning of mīmēsis, to repeat, is that of reenacting the events of myth. By extension, however, mīmēsis can designate not only the reenacting of the myth but also the present reenacting of previous reenactments. So, mīmēsis is a current ‘imitation’ of earlier reenactments. [10] That is because the newest instance of reenacting has as its model, cumulatively, all the older instances of performing the myth and not just the oldest and supposedly original instance of the myth itself.

This line of thought corresponds to the celebrated description of mīmēsis in the Poetics of Aristotle as the mental process of identifying the representing ‘this’ – in the ritual of acting the drama – with the represented ‘that’ in the myth that is being acted out by the drama. In Greek this mental process is expressed thus: houtos ekeinos, ‘this is that!’ (Aristotle Poetics1448b17). Such a mental process, Aristotle goes on to say, is itself a source of pleasure (1448b11, 13, 18). This pleasure is not incompatible with an anthropological understanding of ritual:

Fixed rhythm, fixed pitch are conducive to the performance of joint social activity. Indeed, those who resist yielding to this constraining in- {460|461} fluence are likely to suffer from a marked unpleasant restlessness. In comparison, the experience of constraint of a peculiar kind acting upon a collaborator induces in him, when he yields himself to it, the pleasure of self-surrender. [11]

This anthropological formulation corresponds to Aristotle’s idea of catharsis, as I quoted it in Hour 8e§3. {461|462}

Originally published by The Center for Hellenic Studies under a Creative Commons Attribution-NonCommercial-NoDerivs 3.0 Unported license. From “The Ancient Greek Hero in 24 Hours”, by Gregory Nagy (Cambridge, MA: Harvard University Press, 2013).