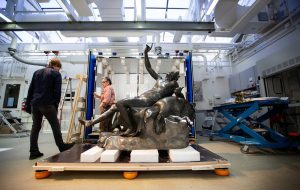 Buried by the eruption of Mt. Vesuvius, this highlight from Italy’s National Archaeological Museum of Naples is the subject of a multi-month conservation project at the Getty.

One of a handful of large-scale bronze sculptures to survive from the ancient classical world has arrived at the Getty Villa for study and conservation treatment. The sculpture depicts a drunken satyr (satiro ebbro)—a follower of the wine god Dionysos in Greek and Roman mythology, half man, half goat—and once formed part of the sculpture collection of the Villa dei Papiri (Villa of the Papyri) in Herculaneum. Villa dei Papiri was the principal model for the architecture of the Getty Villa; in fact, a modern replica of this very statue sits in the reflecting pool of the Villa’s outer peristyle garden.

The bronze has left Italy for the first time since it was made over 2,000 years ago, on rare loan from the National Archaeological Museum of Naples. Along with other loans from Naples and Herculaneum, the sculpture is a centerpiece of the exhibition After Vesuvius: Treasures from the Villa dei Papiri (June 26–October 27, 2019).

In this post I’ll put this fascinating statue in context: where did the Drunken Satyr come from, how was it discovered, who made it, and what do we hope to learn by studying it?

The Accidental Discovery of the Villa dei Papiri

In 1750 workers digging a well near Naples struck a spectacular multi-colored marble floor that once belonged to a luxurious Roman villa. Karl Weber, a Swiss military engineer in the service of King Charles VII, was entrusted with excavating the site. Charles VII was the sponsor of excavations at the nearby town of Herculaneum, which, like its more famous neighbor, Pompeii, was buried by the catastrophic eruption of Mt. Vesuvius in AD 79.

Weber directed a crew of conscripts and convicts to dig a series of shafts and tunnels to seek and remove the most impressive finds to augment the collections of the recently established Royal Herculanean Museum. Weber widened the well for better access, and his men cut the circular pavement into sections and lifted it to the surface for reinstallation within the museum. 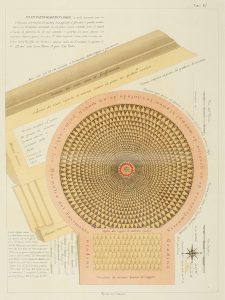 The engineer, however, was interested in more than just collecting impressive artifacts for the glory of the king. Anticipating by more than a century the advent of scientific archaeology, with its emphasis on context, he also drafted an innovative plan of the site. Here he recorded the series of tunnels dug more than 25 meters beneath the surface, traced the outlines of the ancient building (most of which remains buried to this day), and plotted the find spots of the artifacts recovered there.

From the villa’s circular Belvedere, whose beautiful colored floor is reproduced in the Getty Villa’s Temple of Hercules, Weber proceeded to tunnel eastwards. (His original plan, a print of which is shown below, was oriented with the South at the top; the image below shows South at bottom.) His crew eventually encountered fountains, colonnades, and other architectural features, as well as bronze and marble statues, colorful frescoes, and, eventually, a cache of carbonized papyrus scrolls that gave the building its modern name: the Villa dei Papiri.

Reproductive print of Karl Weber’s 1758 plan of the Villa dei Papiri; the original plan is held in the National Archaeological Museum of Naples and will be featured in the Getty Villa exhibition After Vesuvius: Treasures from the Villa dei Papiri. The Drunken Satyr was found near the point labeled B, just to the west (left) of the long reflecting rectangular pool at the center of the plan. Illustration in La villa ercolanese dei Pisoni: i suoi monumenti e la sua biblioteca, pl. XXIV (Naples: Centro internazionale per lo studio dei papiri ercolanesi, 1972; reprint of original 1883 edition). The Getty Research Institute, 85-B13214

Weekly excavation reports record that on July 13, 1754, a bronze statue of a “faun” was found near the western end of long pool in what would emerge as the Villa’s large rectangular peristyle garden: “statue of a nude male, an old man, with two small horns and a beard.” This is the sculpture we know today as the Drunken Satyr.

Bronze statues were plentiful in antiquity, but today they are extremely rare. Why? Unlike marbles, bronzes are readily recyclable. Their valuable metal could be reused for various purposes, and in Late Antiquity and the Middle Ages statues of pagan figures were often melted down. Paradoxically preserved by the volcano, which concealed it under some 80 feet (27 meters) of rock and debris for nearly 17 centuries, the Villa dei Papiri yielded the single largest ancient collection of ancient bronzes: some 65 statues and busts. Of these, the Drunken Satyr is the most impressive. 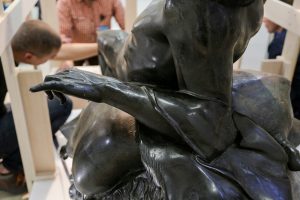 The statue, however, did not emerge from the earth intact. It was covered with volcanic debris and partially damaged. The right arm and left hand had become detached, and much of the lion pelt and wineskin on which the figure rests was lost. Records from July 1759, five years after the Satyr’s rediscovery, indicate that it was undergoing restoration at the nearby royal palace of Portici, where it was eventually mounted on a new stone base. 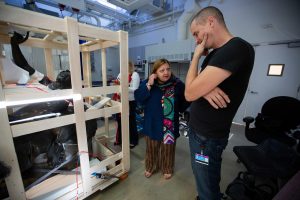 The bronze was also re-patinated, meaning it was heated or chemically treated to give its surface a more uniform, dark-black appearance. Originally it would have been a golden bronze hue, perhaps approximating the color of tanned flesh. The eyes were inlaid with bone and colored stone or glass, the lips coated with red copper, and the teeth, at least those that remain (for the Satyr is depicted missing several), were coated with silver—all giving this rowdy follower of the wine-god Bacchus a vivid appearance.

From Roman Villa to National Museum

Satyrs were frequent subjects in ancient Greek and Roman art. The companions of Dionysos, the god of wine, they are often shown drunk, engaging in sexual exploits and mischief.

The Drunken Satyr was likely produced late in the first century BC for the decoration of the Villa dei Papiri. Its composition, however, is known from other ancient artworks. Its “type”—or combination of subject, style, and pose—was probably invented earlier, in the Hellenistic period (323–31 BC). Bronzes, which were modeled in wax and then cast by pouring molten metal into molds, allowed for the reproduction of popular compositions. Wealthy Romans often commissioned bronze copies of famous Greek statues to decorate their homes and gardens. We do not know who first created the Drunken Satyr type, nor the names of the artisans who produced the bronze from the Villa dei Papiri. In fact, only one of the statues from the Villa bears a signature: it was made by Apollonios of Athens.

The Satyr, depicting a middle-aged figure in dynamic motion, is quite different from the ideal, serene youths we see in Greek sculpture of the Classical period (480–323 BC). With pointed ears, small horns at the top of his forehead, wild hair, scraggly beard and mustache, and wattles, he lifts himself on his left elbow as he topples backward, right leg raised, left bent back sharply.

Wearing a pine wreath with corymboi (flower clusters), the satyr raises his right arm, extending his index finger and snapping his thumb and middle finger in a gesture associated by ancient authors with Dionysiac abandon.

Art historian J.J. Winckelmann, who saw the statue in the 1760s after it was restored and installed in the museum at Portici, remarked: “The belly of the fine drunken bronze Silenus sags like a leather sack, but his thighs express the agility of the bodies of satyrs and fauns in the prime of youth….One could say that the Silenus is a masterful work.”

The statue quickly became famous, and its image spread throughout eighteenth-century Europe through engravings. 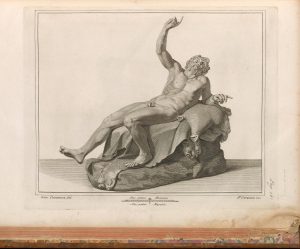 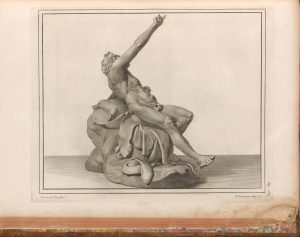 In the early 1800s, the royal collections were transferred from Portici to Naples, where they were installed in the sixteenth-century Palazzo degli Studi, which was rechristened the Real Museo Borbonico (Royal Bourbon Museum). A fanciful engraving anticipating the event depicts numerous artifacts being wheeled through the streets of Naples. At the front of the procession, just before the columns at the entrance to the new museum, are the Drunken Satyr and one of the two bronze Runners found nearby. (The engraving is reversed, so the Satyr raises his left arm, rather than the right.) 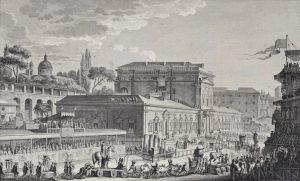 The Drunken Satyr long remained one of the most popular exhibits in the museum, which, after the fall of the Bourbon monarchy and the unification of Italy in the 1860s, was rechristened the Museo Archeologico Nazionale di Napoli (MANN; National Archaeological Museum of Naples).

Goals of the Conservation Project

Unfortunately, with the passage of time, the early restorations of the statue have weakened. Thus, following the success of several previous joint initiatives between MANN and the Getty, which have seen the successful conservation of ancient bronze statues of Apollo from Pompeii and Tiberius from Herculaneum, and a monumental krater from Altamura, the Drunken Satyr left Naples for the first time in more than 200 years.

Using laser scans to ascertain precise measurements of the dynamically splayed figure, a custom crating system was designed at the Getty and manufactured in Italy, incorporating several layers of visco-elastic Sorbothane® with high dampening characteristics in order to reduce vibration and mitigate potential shock. Getty conservator Erik Risser and preparator Rita Gomez traveled to Naples to collaborate with Neapolitan colleagues on the packing of the statue, which had to be craned out of a second-story window of the museum before it was flown to Los Angeles.

The Drunken Satyr—in a specially designed crate—is carefully handled as it leaves the National Archaeological Museum of Naples for the Getty Villa in Los Angeles. Photo above and video below: Rita Gomez

Safely arrived at the Getty Villa in Malibu, the statue is now being carefully examined and meticulously documented to record its current condition. As part of this collaborative project, we will aim to identify past interventions—what was done to the statue in both ancient and early modern times to repair it, stabilize it, or change its appearance. We will also investigate any potential instabilities, such as metal corrosion and the connection between the statue’s various parts, as well as their connections to its modern stone base. And we will evaluate possible aesthetic issues, considering how to best display the sculpture to enhance viewers’ appreciation of its artistry.

We will also turn to conservation science to investigate how the statue was originally manufactured, using techniques such as X-radiography, endoscopy, technical imaging, and non-invasive analytical methods. Scientific information will be crucial in the design of the treatment plan aimed to ensure long-term stability of the object. It will also allow scholars to compare the Satyr to other ancient bronzes to better understand not only this statue but also other ancient bronze works and their long and varied histories.